An academic freedom issue at Queen's University has suddenly erupted, simultaneously with an outbreak of measles -- with implications for public health and occupational safety as well as freedom of speech. All those issues demand attention. 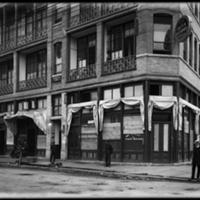 Wait, He Said What?

The issue boiled up in the Queen's school of kinesiology and health where an adjunct professor, Melody Torcolacci, has reportedly been teaching her first-year students some dubious ideas about the efficacy of vaccination. Judging from her students' comments on RateMyProfessors.com, she'd been doing so for several years. While some students found her likeable, and her course easy, many didn't believe a word she said: "She cites long discredited 'scientists,'" alleges one anonymous entry, "and her lecture slides suggest a connection between autism and vaccines. She is a crock."

The dispute really went public on Feb. 3, when students posted a Storify file including student tweets and Torcolacci's lecture slides. The principal of Queen's, Daniel Woolf, promptly posted a bland statement on the university website:

"I became aware today of the situation regarding HLTH 102 and have asked the provost and vice-principal (academic) to work with Arts and Science to look into this matter and gather more information. The university is committed to the academic freedom of our faculty members; at the same time, the university expects that faculty members will present intellectually rigorous research and course material and that they will present available scientific evidence objectively and declare their biases. The university also expects that courses meet the needs of our students in terms of promoting critical thinking, independent judgment, and discussion."

Torcolacci herself has not replied to media inquiries (including The Tyee's), but we know a little about her: a former Queen's student and athlete who acquired a master's degree in physical education. She teaches courses such as Physical Fitness and Wellness, The Art and Science of Coaching, and Physical Determinants of Health -- the course where the current controversy arose.

Academic freedom is an issue on campus precisely because research can produce dangerous results for the researcher. It may have implications for the status quo, whether in religion, society, or politics. Insulating scholars from official anger is absolutely essential.

The tenuous life of an adjunct

Scholars may also need insulation from one another. Universities, like other social institutions, prefer harmony to dissent -- especially controversy that draws public attention. Every discipline has its received wisdom, which its scholars rarely question if they want the respect of their peers.

Even that depends on the discipline. Theoretical physicists can quarrel all they like about string theory, but vaccination is an established principle of public health. Question it, and you question over two centuries of medical progress.

Campus anthropology is another factor: a tenured male Ph.D. with a good opinion of himself can say anything he pleases. He may lose some research contracts, but his job is secure. Adjuncts, however, are far less secure. They're temporary, ill-paid faculty, serving from semester to semester while doing low-status first-year courses. They publish what they can while hoping for promotion to a tenure-track position.

As a "continuing" adjunct, Melody Torcolacci may have some job security though she hasn't published much. Google Scholar shows her most recent academic publication to be her 1997 master's thesis: "Social Factors Which Influence Canadian Women's Participation in the Shot Put." Within the fields of physical and health education she may have kept up with the literature, but she has not contributed to it.

Had she been publishing vaccine-skeptical research in peer-reviewed journals like Vaccine, she would be a more credible critic. Instead, she has presented evidence from dubious sources, and in so doing has brought scandalized public attention to her university.

As measles makes a comeback

And it could hardly happen at a worse time. Measles, a highly contagious and sometimes lethal disease, is making an alarming comeback in North America. Those who reject vaccination, whether for religious or "philosophical" reasons, are seen as carriers and spreaders as we saw last spring in the Fraser Valley.

In the U.S., "anti-vaxxers" are numerous enough that they form a politically interesting bloc, and politicians are now obliged to take a stand on the issue.

But vaccination is also an immediate issue right in our own hospitals. The B.C. Nurses' Union urges its members to get flu shots before influenza season, but a substantial number choose not to -- even though they are now obliged to wear masks on the jobs if they're not vaccinated. The BCNU says:

"Nurses and other healthcare workers should have the right to decide whether to be vaccinated against influenza, based on their understanding of the current evidence and in discussion with their own family physician or other care provider."

Sometimes, the flu vaccine isn't fully effective against the strain that dominates the season; that seems to be the case in Canada this year. Still, it improves the odds for those most susceptible to flu, and immunization remains a sore point in the health professions. So does hospital infection control: an estimated 8,000-12,000 deaths a year result from hospital-acquired infections in Canada.

Healthcare workers must also reflect on the irony: while some of their members reject vaccination, others are scrambling to develop new vaccines against everything from cholera to Ebola. Lacking such vaccines, caregivers are likely to contract such diseases themselves, like the Scottish nurse Pauline Cafferkey.

She was lucky to survive. According to the World Health Organization, 821 other healthcare workers have contracted Ebola, and 488 have died.

But Ebola also has a lesson for the vaccination controversy in general. Doctors Without Borders, which has been fighting the outbreak for almost year, said on Feb. 4 that it had made a "big mistake" by failing to communicate quickly and effectively with the people most at risk. Confronted with strangers wearing "spacesuits" and telling them not to touch one another, many West Africans either attacked the health workers or disappeared with their sick -- ensuring the faster spread of the disease.

Good health communication is now seen as far more important than it was pre-Ebola, and such communication needs to be used in all areas of public health. It's not enough for doctors and nurses to believe that vaccination and infection control actually work. They have to persuade the public, in terms that make sense to that public.

By inadvertently raising the issue, Melody Torcolacci has actually created a teachable moment for Canadian public health. Sacking her, or removing her from "sensitive" courses, would only make her a martyr. If Torcolacci and those who agree with her are willing to engage in a public debate with vaccination advocates, their students and the public would see how science advances -- by assertion, evidence, and accurate prediction. The anti-vaxxers would be refuted, and public awareness would improve.

That awareness, in turn, would improve our "herd immunity," so that those who really can't be vaccinated would be protected by all those who can.