If you are searching for significant anniversaries for 2015, one that you might find illuminating is the publication of a book published 40 years ago entitled The Crisis of Democracy. 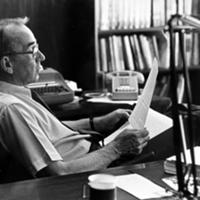 The title would seem fitting today but that's not the crisis its authors had in mind.

The book was commissioned by a new international boys club of finance capitalists, CEOs, senior political figures (retired and active) and academics from Europe, North America and Japan. The Trilateral Commission (TLC) could be said to be the birthplace of neoliberalism, a political theory that suggests progress depends upon "liberating individual entrepreneurial freedoms and skills within an institutional framework characterized by strong private property rights, free markets and free trade."

Alarmed by the spread of the liberal state and its economic and social interventions, the TLC was founded to reverse the welfare state and re-establish capital to its "rightful" place at the pinnacle of economic and political power. (It still exists but has been supplanted to some extent by the World Economic Forum.)

The TLC book concluded, in the words of its American co-author Samuel Huntington, that the industrial countries suffered from "an excess of democracy." He wrote "the effective operation of a democratic political system usually requires some measure of apathy... on the part of some individuals and groups." He bemoaned the fact that "Marginal groups, as in the case of blacks, are now becoming full participants in the political system."

The TLC was just one of a growing number of institutions -- forums, think-tanks, academic clusters, major media outlets -- focussed on the same theme: that expectations of what government could provide had risen to a level that was now threatening the proper functioning of capitalist democracies. In Canada the most prominent and aggressive of these would be the Fraser Institute (FI), headed up Michael Walker (retired).

Walker told a group of worried corporate CEOs from B.C. that "if you want to change society you have to change the ideological fabric of society." In short, you had to launch a culture war against the activist state. It would be a war against democratic "excess."

The Fraser Institute (founded in 1973, the same year as the TLC) has been engaged in that process ever since on countless fronts and funded generously by well-endowed foundations and corporations. The guru for the FI was Milton Friedman, eventually the world's pre-eminent neoliberal economist. At an FI forum on democracy, Friedman declared: "I believe that a relatively free economy is a necessary condition for a democratic society. But I also believe that... a democratic society, once established, destroys a free economy."

At the time these political declarations were widely ridiculed, dismissed even by conservative politicians and writers. After all, the West was characterized by mixed economies (government and private investment) that were doing very well in terms of growth and profitability. High taxes on wealth did not prevent the rich from investing, government revenues were robust, unemployment was low, social strife in Canada was rare.

Fast forward 40 years and any new book with the title The Crisis of Democracy is likely to be chronicling the result of four decades of systematic assaults on the liberal/social democratic state. Indeed in contrast to Huntington's "excess of democracy" complaint, the phrase "democratic deficit" has now been used by scores of writers and commentators. It is easy enough to chronicle the long list of attacks on democracy carried out by Stephen Harper as many have, and in the U.S. the domination of corporate money (backed by the U.S. Supreme Court) and outright theft of elections has democracy in that country on the ropes.

But it is the consequences of this decline and erosion of democracy that should be the most important focus of critics and citizens alike. The exceptionally successful four decades campaign to change the "ideological fabric" of society has put western civilization on a track to irreversible collapse according to a major study sponsored by NASA's Goddard Space Flight Center. The study focused on population, climate, water, agriculture and energy as the interrelated factors that determine the collapse or survival of civilizations going back 5000 years.

According to a Guardian report on the study, these factors can coalesce and lead to civilization's collapse if they create two critical social features: "the stretching of resources due to the strain placed on the ecological carrying capacity... and... the economic stratification of society into Elites [rich] and Masses (or 'Commoners') [poor]."

According to the study these two developments played "a central role in the character or in the process of the collapse" in the demise of the Roman, Han, Mauryan, Gupta and multiple Mesopotamian Empires as well as the Maya. The study provides convincing "testimony to the fact that advanced, sophisticated, complex and creative civilizations can be both fragile and impermanent."

How far down the road to collapse are we? For my generation not so far that we will see the worst of it. But what is alarming is that all the signs are so dramatically obvious. And while the mainstream media isn't yet talking about the end of our world, the issue of grotesque inequality and unsustainable resource depletion are somewhere in the media almost every week. Indeed inequality in particular has been a hot topic ever since the Occupy movement briefly swept the planet. Yet if you monitor the political debate in this country the two most important trends in our society and the world are virtually never mentioned except rhetorically. There are no serious policy prescriptions. Mass denial reigns. Or, as Freud stated, we are "knowing without knowing."

Regarding income (and wealth) inequality, a 2010 study by the Canadian Centre for Policy Alternatives revealed that the top one per cent claimed close to a third of all income growth during the decade from 1997 to 2007. "That's a bigger piece of the action than any other generation of rich Canadians has taken," said Armine Yalnizyan, CCPA's senior economist and author of the report. "The last time Canada's elite held so much of the nation's income in their hands was in the 1920s. Even then, their incomes didn't soar as fast as they are today. It's a first in Canadian history and it underscores a dramatic reversal of long-term trends."

Internationally, the picture is just as bad or worse. Earlier this month Oxfam released a report revealing: "The combined wealth of the world's richest one per cent will overtake that of the remaining 99 per cent by 2016.... " The wealthiest one per cent -- amounting to 72 million people -- already owns 48 per cent of all global wealth. This trend continues to accelerate, flying in the face of all the evidence that it could ultimately be fatal for capitalism.

Is this really what the geniuses at the Chicago School of Economics like Milton Friedman had in mind? Did he really believe that "a democratic society, once established, destroys a free economy"? Would he have had any qualms about his policy prescriptions resulting in capitalism devolving into neo-feudalism or into Plutonomies? The term Plutonomies was first used by analysts at Citigroup in 2005 to "describe a country that is defined by massive income and wealth inequality." The analysts singled out the U.K., Canada, Australia and the United States.

Elites won't save us

Theoretically, of course, neoliberalism says the state should not intervene in the efficient functioning of the market -- resulting in prosperity for everyone. But the theory, according to neoliberalism authority David Harvey, was simply hijacked by the elites to fleece the system -- bailing out the financial sector with trillions of taxpayers' dollars and failing to re-regulate, while gutting labour and environmental regulation. Government actions reveal neoliberalism as "more of a practical attempt to restore elite class power than as a theoretical project driven by the works of [Friedrich von] Hayek or Friedman."

The NASA study is not optimistic about our chances of avoiding eventual collapse given the failure of other civilizations. It says "collapse is difficult to avoid.... Elites grow and consume too much, resulting in a famine among Commoners that eventually causes the collapse of society."

Warnings go unheeded. The NASA reports says "historical collapses were allowed to occur by elites who appear to be oblivious to the catastrophic trajectory (most clearly apparent in the Roman and Mayan cases)."

How close are we to collapse? The study points out that the process can extend over decades and even centuries. Yet some of the supporting empirical studies (by KPMG and the British Office for Science) suggest a perfect storm that involves food, water and energy could occur within 15 years.

The NASA study highlights two trends -- resource depletion and inequality -- as the key factors in civilization collapse. But there is a third and it explains why historically elites have been "oblivious" to their unfolding catastrophes. That factor is the political system of the particular civilization. Designed to govern and manage social and economic life before it became corrupted, and still in the hands of the benefiting elites, these governing systems were simply incapable of incorporating the idea of collapse into their thinking.

What would have to happen for us to escape the same fate?