"In today's economy, when having both parents in the workforce is an economic necessity for many families, we need affordable, high-quality child care more than ever. It's not a nice-to-have -- it's a must-have. It's time we stop treating childcare as a side issue, or a women's issue, and treat it like the national economic priority that it is for all of us." -- President Obama's State of the Union Address, Jan. 20. 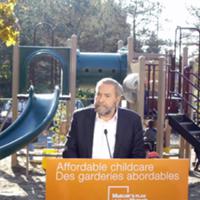 While President Obama tries to get the ball rolling south of the border, we also have some catching up to do at home. Any plausible attempt to expand and sustain the prosperity of working families in B.C. will demand that the issue of affordable child care be taken more seriously by economic policymakers. Unrealistically high daycare costs commit a double foul on the economy: first, by strangling family budgets; second, by restricting the labour activity of one parent -- usually mothers.

It's no stretch to suggest that nearly everyone in this province is only one degree (or less) from a friend, co-worker or relative that is struggling with the cost of daycare. I can think of many examples around me. While I don't personally claim any particular expertise of the many variables that create a quality daycare system -- I'm a childless male in an overpaid profession -- I do spend a fair amount of time around finance and economics. And from that perspective, the current cost of daycare appears to me completely counterproductive.

Daycare typically eats up between $900 and $1,200 a month in Vancouver, or 19 per cent of the median two-adult household's pre-tax income of $77,000. That's just for one toddler. Clearly, single parent families and families with multiple young children fare far worse. Yes, there is help in the form of tax deductions, the Universal Child Care Benefit and direct provincial support for daycare facilities, but it is a mathematical fiction to suggest that the current $7,000 child care deduction limit (or the $8,000 proposed) can even be remotely maximized by the average household.

And the benefit, whether at the current $100 per month or the proposed $160 per month, is actually treated as taxable income. Our single child median household, with incomes split evenly, can maybe squeeze $2,300 a year from these programs. The balance falls to the family: $1,000 a month; $50 a day. That's still 16 per cent of their pre-tax income. We should fail to be impressed by this level of government support. In a city as expensive as Vancouver, this is a real knock to scarce disposable income and a significant disincentive to have kids or even live here. What an unnecessary threat to retaining potential community leaders, innovators, entrepreneurs, consumers and taxpayers.

The second casualty of high child care cost is the robbing of a mother's choice to work if she so desires. B.C. compares well alongside modern economies such as Denmark and Sweden in terms of the overall workforce participation rate for women aged 25-54. But for women with children under the age of six, there are noticeable differences. In Quebec, closer to home and with Canada's only accessible means-tested daycare, the rate of labour participation for these mothers is 79 per cent. In B.C., it is 72 per cent. That statistical difference alone equates to almost 13,000 women who are not in the labour force. The other dimension to this issue is a disproportionately high part-time employment level among those same mothers. In B.C. their part-time employment rate is 67 per cent higher than it is in Quebec, despite B.C. having a faster-growing economy and a lower unemployment rate. Thirty-nine per cent of women working part-time in Quebec said they cannot find full-time work. Only 13 per cent of B.C. women offer up that reason. Instead, ask women the reason they work part-time in B.C. and 60 per cent cite child care as the cause. In Quebec, just 32 per cent said so.

Taken together, lower labour force participation by mothers and a higher incidence of part-time employment demonstrate that B.C. could add almost 30,000 full-time working women to the payrolls, a 28 per cent increase to the status quo, if we were to mirror Quebec's current rates. At the median employment income level for women in B.C., this would approach $1 billion of additional market income. One would be forgiven for asking if the labour market could absorb the influx of new talent. Well, it did with previous waves of women entering the workforce and it does with new immigrants every year. And will mothers be inclined to enter the labour force if child care becomes more affordable? Ultimately everyone will make their own decision based upon their family's own situation, but data from other jurisdictions point to women opting to work when the choice is available.

Among the greatest wellsprings of economic growth in the latter half of the 20th century was the increased participation of women in the workforce. In the mid-1970s, the labour participation rate among Canadian women hovered around 50 per cent, by 1990 it was 75 per cent and by 2014 it was 82 per cent. Clearly, a positive economic impact will (and did) result from a 30-point employment bump for half of the population. Affordable child care can be a last step on that road. Admittedly, making child care more accessible will require an investment up front -- a mature conversation will be required to strike a funding balance. But like all investments, it should be judged by its potential returns. Affordable child care is an opportunity to enhance middle class security and to generate long term economic growth in B.C. Both of those factors should carry weight in the discussion. Reducing the child care cost strain for families in B.C. will produce many net benefits to our society, and that belongs to neither the left nor the right, but to the 21st century.