On the day The Tyee published my opinion piece "On Burnaby Mountain, Confronting the Gorilla," I had a Twitter conversation with a scientist specializing in pipeline safety and spill clean-up. He has logged over 25,000 hours researching and cleaning up industrial pollution -- and he is pro-oil and pro-pipeline. Our exchange followed a typical pattern: his "safer than trains" and "way of life" versus my "pipelines leak, too" and "climate change." 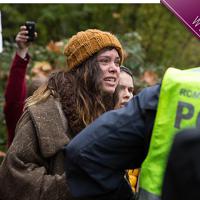 When we started repeating ourselves, I gave him the last word, which was this: "I will tell you a secret," he said, "it's even worse in Nigeria."

And then he added: "… which is why I prefer Canadian oil."

Clearly, he found a powerful and persuasive logic in this comparison, but it left me feeling deeply disturbed. When I thought about it, I realized that what troubled me most was his implication that these were the only choices. Why was he taking such a defeatist attitude? I wondered. Why must we set the bar so low?

It was like talking to an American about gun violence and having him cap his argument by saying, "I will tell you a secret: it's even worse in Mexico."

Would most Canadians really be content to end the conversation there? Is this really what we're willing to settle for?

Whatever our differences, I'm pretty sure my new Twitter friend and I would agree on this: Canada is one of the wealthiest nations in the world, with one of the highest levels of education, one of the deepest pools of immigrant wealth and talent, and an unparalleled ratio of population to natural resources. In this sense, Canada is the richest, luckiest nation on earth, per capita, by a wide margin.

Given this, I have to ask: when so much is at stake, is not being as bad as Nigeria really the best we can do when it comes to energy?

A century ago, our transition to oil and gas was a thrilling, world-changing innovation. Oil quantum-leaped us to where we are today, but oil was and is also profoundly destructive -- not only to ecosystems, but also to traditional lifeways and, increasingly, to democracy.

When one takes a global perspective on the state of our environment, the explosion in renewable energy technologies, and the growing conflicts over how and where oil is produced, it becomes clear that we are poised for a major transition in the ways and places we generate energy.

All of these pipelines would run from the Alberta oilsands toward some market -- any market -- that will buy the stuff. We don't intend to use it because, in Canada, bitumen is held in the same contempt B.C. logs are: we don't even want to refine it here.

At this point, I'd like to pose a question to my scientist friend on Twitter: When does pragmatism become defeatism, or worse, denial?

Denial about what? he might ask. In Ottawa, the elephant in the living room is climate change.

What we've seen play out at Kinder Morgan's drill site in Burnaby in recent weeks is what happens when citizens believe they must do what our federal government has not. They have gathered in the mud and the rain, and now the snow, to confront a gorilla that, as I wrote in my previous piece, is an enormous, Texas-based oil transport and storage corporation with an overwhelming motive to export as much profit as possible for their mostly foreign shareholders.

The hundreds of citizens who gathered on Burnaby Mountain did so to connect the dots between this gorilla's ambitions and Ottawa's enabling denial. They are urging you and me to wake up to the fact that climate change is a clear and present danger, and that it actively threatens, not only the quality of life my Twitter friend holds so dear, but civilization as we know it.

In Nigeria, the environmental and political realities of oil extraction are worse than in Canada. This is no "secret" to me, or to most of us. But it is a false dichotomy, and we have some important choices to make.

Here are some more things that I know -- because these facts are readily available to anyone who cares to learn them, whether they live in Lagos, Vancouver, Calgary or Ottawa.

First, there is the UN's fifth IPCC report. Released one year ago, and unambiguously titled "CLIMATE CHANGE 2013," it represents two million gigabytes of data, 9,200 article citations, and 1,500 pages analyzed by 1,000 expert reviewers from 50 countries. It lays out, in no uncertain terms, the devastating impact of fossil fuel consumption on our oceans and atmosphere.

The IPCC's case for drastically reducing greenhouse gases is not a list of hypotheticals, soft recommendations, or distant targets. It reads more like a code red for the climate: a series of dire predictions and scenarios assembled by the world's top scientists, armed with comprehensive data gathered over decades.

Related to this is the Keystone XL pipeline, which has become a lightning rod for this widespread state of alarm. After years of delay, it was just voted down by the U.S. Senate. If the Republicans bring it back to life in the new year, it may very well be vetoed by President Obama.

Even if it gets approved, Keystone is going to have a hell of a fight on its hands. It's already begun: to date, more than 1,000 Americans have been arrested protesting it and, two months ago, the pipeline was a central focus of the largest climate march in history when nearly half a million people marched worldwide, 310,000 of them in New York City. When I last checked, more than 95,000 people had signed an online "pledge of resistance" indicating their commitment to civil disobedience, should it become necessary to block Keystone.

This is not a case of American homeowners crying NIMBY. These are average citizens who read the news, are aware of their surroundings, and care about the world their children and grandchildren are going to inherit. And there are millions of these people -- on both sides of the border.

Just last month, the U.S. and China, the world's largest economies (and burners of fossil fuels) sat down together and publicly acknowledged the same elephant Ottawa continues to ignore. They did this by signing an historic climate agreement in which Obama pledged to reduce U.S. carbon emissions to 26 to 28 per cent below 2005 levels by 2020 (just five years away). In return, President Xi Jinping pledged that China's emissions would peak by 2030.

But there's more than one way to confront the gorilla and acknowledge the elephant. Around the world, a burgeoning divestment movement is taking place on university campuses and in municipal and federal governments. To be clear, the international divestment movement is not about punishing fossil fuel companies, it is about climate justice, a concept all of us will be getting more familiar with in the coming years.

In the last month alone, Norway announced the divestment of its largest pension from coal companies to the tune of $75 million, and the World Bank announced its plan to abandon investments in future coal projects "because climate change will undermine efforts to eliminate extreme poverty."

They are doing this because the IPCC's predictions are already coming true. In May last year, atmospheric carbon reached 400 parts per million, widely regarded as a kind of ne plus ultra threshold for climate change. Levels beyond this will virtually guarantee planetary warming of more than two degrees Celsius, and the consequences will change the world as we know it.

Even in Canada, we've seen some early signs. The Calgary flood was not only the worst on provincial record but also the most costly natural disaster in Canadian history. Last summer, the boreal forests of the Northwest Territories lost 3.5 million hectares of forest to the worst fires in more than 30 years. On English Bay in Vancouver, high tides are now climbing stairs along the seawall that were untouched when I moved here in 1998.

The future is coming up fast, and it's not just the climate that's changing: everything I've just described has occurred in the past 18 months.

Because Canada can do better

If ever there was an historic moment that favoured Canada and a transition to alternative, sustainable, renewable energy, that moment is now -- not in 2020, or 2050, or when the latest oil boom tanks -- but right now. I want to tweet my new scientist friend -- hell, I want to call him on the phone -- and say, Imagine if we rose to this international challenge to embrace, and improve on, what innovators around the world are already doing with solar, wind batteries, and alternative fuels? What if we were to seize this pivotal moment with nation-building zeal -- the kind that once built railroads and won wars?

Because these alternatives will be developed, and the rewards will be reaped. The only question now is whether Canada will be a leader in this energy revolution, or merely a customer, late to the game. Canada has the resources, human and natural, to become a renewable energy superpower. I truly believe this. And Alberta's oil will be instrumental in developing it, not as the cash cow of last resort it is today, but as the lever -- the transformative energy it truly is -- to jumpstart our transition.

Knowing what so much of the world knows and is already acting on, I want to ask my scientist friend if he's really content to settle for being better than Nigeria. Do we, with our abundant natural gifts and world class talent, want to pin our economy, our reputation, and our future on exporting unrefined bitumen to countries desperate enough, or unprincipled enough, to burn it (but only when market conditions are favourable)?

We tried this approach with sea otters and beavers and trees and cod, and it worked great. Until it didn't.