Two weeks after the senseless murder of a soldier on Parliament Hill (and another earlier in Montreal) there are several things we know and many we don't. Obvious questions have been asked and inconvenient ones have been left aside. 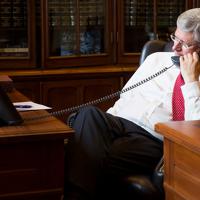 'Party of One': An Indictment of Stephen Harper

We know -- and indeed could predict one second after the shooting -- that Stephen Harper would use it as an excuse to expand the security and surveillance state he has been constructing.

We know that the shooting was not a terrorist act, but a criminal one, regardless of what the RCMP and CSIS, eager to enhance their political role and resources, are saying. (Within an hour of the shooting an over-eager CSIS official was declaring hopefully, "this will change everything.")

We know that the enhanced security measures and police powers will do nothing to help us understand, let alone deal with, the root causes of what the Harper government claims is an existential threat to Canada and the West (but is content to deal with symptoms).

We know that there will be no additional resources from governments to deal with mental illness as Mr. Harper plans to cut billions from medicare. There will be no revisiting of the issue of gun registration in spite of its obvious importance in dealing with such incidents. And there will be no effort on the part of our Christian fundamentalist PM to counter the anti-Muslim backlash he knows he is contributing to by hyping the terrorist threat.

The bigger questions remain to be asked and so they won't likely be answered. They include:

1. What freedoms must we now erode and why? Mr. Harper, who eagerly adheres to the (simplistic) idea that jihadists "hate our freedoms," might reasonably be asked to explain why he is so eager to destroy those freedoms in response to the jihadists' "war" against the West. Isn't that exactly what they want -- or does Harper want to rid us of freedoms so the jihadists won't hate us so much? Wouldn't a genuine response be to celebrate and enhance our freedoms even more (perhaps by ending the auditing of groups critical of the government)?

2. What is producing Canada's homegrown jihadists? This is another question the government seems decidedly uninterested in: what is it about our Western societies -- supposedly the model for the entire world, morally, culturally and socially superior -- that alienates some young people so much that they can suddenly decide it's all right to kill innocents and it's worth dying for a cause so remote and alien to their lived experience that it is scarcely possible to believe they can understand it let alone truly embrace it? Could it possibly have anything to do with 35 years of neoliberal assault on community and consumer capitalism's failure to provide meaning to their lives beyond purchasing the next electronic gadget?

3. What is the most effective response to Islamists? Yet one more question not being asked is what would a rational, enlightened (we are enlightened, right?), effective response to so-called "radical" Islam look like? The "this changes everything" gang certainly don't intend to change Canada's foreign policy or recommend a change to its allies. Yet it is key to any long-term solution.

There are countless experts and historians who are eager to address the issue. And we know what they would say about Stephen Harper's efforts to transform Canada from a moderate, middle power with a history of virtually inventing UN peacekeeping, into a shrill, warmongering nation ever ready to rattle its (insignificant) sabre at any opportunity.

The fact that these two unconnected killings were not terrorist acts doesn't mean such acts cannot or will not happen. And while Mr. Harper puts on his warrior's armour and militarizes the government's response, he ignores the impact of his reckless Middle East foreign policy on escalating such threats. Canada's ham-handed policies actually do put us at risk.

According to a report in the National Post, on Sept. 21, ISIS spokesman Abu Muhammad al-Adnani "urged ISIS supporters to kill Canadians, Americans, Australians, French and other Europeans.... Rely upon Allah.... Do not ask for anyone's advice and do not seek anyone's verdict."

This threat is clearly connected directly to Canada's policies and its determination to join the war against ISIS. Harper, in what has become his standard adolescent response to events in the Middle East, bravely declared he would not be "cowed by threats while innocent children, women, men and religious minorities live in fear of these terrorists." Yet Canada's contribution is laughably minuscule -- but just big enough, perhaps, to put us at risk of a future attack. And all, as usual, for domestic political consumption as evidenced by the total inability of the government to explain its mission.

To their credit the opposition parties in Parliament, the NDP and the Liberals, voted against the ISIS mission for most of the right reasons: what exactly was the mission, what were the government's expectations, how was success being defined, what Canadian interests are being served and why six months? Not one of these questions was answered and instead the questioners were treated to the usual contempt from the prime minister.

4. Can we learn from how we got here? We are supposed to learn as children that actions have consequences so I suppose we are left to conclude that current leaders of the Anglo-industrialized countries (in particular) were badly neglected by their parents. A catastrophic failure of imagination on the part of the West has led us to this point. It's worth tracing back to its origins. The first failure belonged to Zbigniew Brzezinski, Jimmy Carter's national security advisor, and the key architect of the mujahedeen war against the Soviet Union in Afghanistan. Before the U.S. began arming, financing and training the original handful of religious zealots opposed to the godless Soviets, they were a threat to no one.

In an interview that appeared in 1998, Brzezinski revealed his impoverished imagination when asked if he regretted creating Islamic terrorists: "What is most important to the history of the world? The Taliban or the collapse of the Soviet empire? Some stirred-up Muslims or the liberation of Central Europe and the end of the Cold War?"

ISIS would not exist had the U.S. not created its predecessors. And this failure of imagination is replicated year after year in the White House, in the Strangelovian world of NATO and now in Ottawa. Imperial hubris, wilful ignorance, political opportunism and sheer incompetence still determine Middle East policy. Harper enthusiastically bombed Libya, with the unintended but predictable consequence of handing over thousands of tonnes of sophisticated weapons to another branch of radical Islamists. He gives Israel absolute carte blanche in its savaging of Palestinians, alienating even moderate Arabs throughout the region, and now he pointlessly tweaks the tail of the ISIS tiger.

His every act in the name of Canada creates more jihadists. We are just lucky that an attack on Canada initiated by ISIS is extremely unlikely.