In a recent Tyee column, Bill Tieleman expressed his outrage over the cities of Surrey and Burnaby not taking up the cause of homeless shelters. Vision Vancouver has stepped into the wide gap left by provincial and federal governments and re-directed property tax dollars to social services, so why can't all the other cities? (Although he doesn't mention cities like Richmond or West Van.) 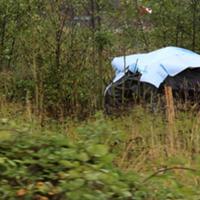 Unfortunately, local government gets a meagre eight cents out of every tax dollar paid by citizens and business. Ninety-two cents goes to federal and provincial coffers. So while Ottawa spends $35 billion for new fighter planes and Victoria crows about the lowest corporate taxes on the continent, Tieleman insists that cities should either raise property taxes, or shift funds away from their own duties, to fix a problem that has been created by years of inaction by "senior" governments. Why is Tieleman letting them off the hook? After all, health and housing are clearly their job.

Even more simplistically, he thinks that overnight shelters solve the problem. Without permanent social housing, along with mental health and substance abuse treatment, shelters are a pathetic stop-gap that now perpetuates homelessness. It is the cheapest, but least effective solution. It makes armchair liberals feel good, while people are shoved back out on the streets to be victimized at every turn. With nothing to transition to, it is an endless cycle requiring more and more shelters.

By the way, if Tieleman had taken the time to speak to me, he would have learned that Burnaby hosts the 100-bed Mental Health and Addictions centre at Willingdon, absorbing the myriad of police attendances that accompany such a facility. Unfortunately, even with a massive waiting list, it is about to close, because the province sold the land to balance its budget. We also host the youth treatment centre for B.C.

Burnaby dedicates 20 per cent of its density bonus funds from new development (millions of dollars) to non-profit housing and contributes city-owned space for non-profit organizations in our town centres. In our last attempt to support a transition shelter for women, advanced by Elizabeth Fry, the province killed the deal after public hearing and reimbursed the agency to the tune of $100,000 for their losses, claiming they did not have enough money to complete the project. Despite our outcries, nobody was interested.

I am not going to criticize Vancouver for how it chooses to spend its taxes, but promising to end homelessness, when other orders of government have abandoned their responsibilities, is not a course our council wants to follow. That does not mean we are insensitive to the needs of people who are hard to house because of mental illness or addictions. In fact, we will continue to demand meaningful assistance, the re-opening of permanent treatment facilities (like Riverview) and long-term social housing. People struggling with mental health and addictions issues need an opportunity to live with dignity and integrate into our community. Tieleman should re-direct his outrage to the real villains in this tragic story.