Education Minister Peter Fassbender has publicly suggested the BCTF take down teachers' picket lines for a 2-week "cooling off period" while veteran mediator Vince Ready works with the government and BCTF negotiating teams to reach a collective agreement. 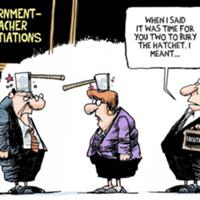 Don't do it, is my strong advice to teachers -- it's a trap.

I am sure many teachers are running out of cash or into deeper debt without a pay cheque and the thought of some cash in hand is tempting, as well as the enormous pressure from media, parents and students to get school started on time.

But if teachers drop their picket lines and go back to work on Sept. 2, it will lead to a disastrous result.

First, the pressure on the BC Liberal government is then off and it will go back to a hardline, no movement position.

Third, Vince Ready will then put all the pressure on the BCTF to compromise far more than the government.

Don't blame Ready. That's how he and other mediators get deals -- by forcing the weaker party to surrender on more and more of their demands until a deal is reached.

No one should think veteran negotiator Peter Cameron, Fassbender or Premier Christy Clark want the two-week cooling off period to get kids back to school -- they want it to get the BCTF into an impossible to get out of corner!

So teachers, don't listen to the media, some of whom are putting out some amazingly uninformed, inexperienced and contrary to all labour-relations experience commentary.

It is not "reasonable" to give up the only strength you have to get a negotiated contract -- a picket line that stops schools from opening.

Make no mistake, the BCTF will have to make some concessions to get a deal.

But bargaining from a position of strength -- not weakness -- is the only way to get an acceptable agreement.

Don't make a huge mistake and listen to the cooling off appeals. Get an agreement that works for you as teachers and for your students, then go back to work.