In order to begin construction of the Northern Gateway pipeline, which terminates in my hometown of Kitimat, B.C. Premier Christy Clark has five conditions while the National Energy Board's Joint Review Panel has 209. But why stop there? I've come up with my own 30 conditions for both official and unofficial pipeline proponents to meet before shovels hit the ground. Got any more? Add them to the comment thread below. 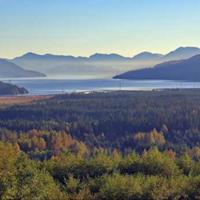 No, Northern Gateway Is Not a Nation Builder

1. Admit the Joint Review Panel for the pipeline was as culturally sensitive to First Nations as a hipster wearing a neon headdress and Speedos to a pow wow.

2. Apologize to David Suzuki. Dudes, you drove the Yoda of environmentalism out of his own foundation. Darth Vader's theme should play when you enter a room.

4. A number of First Nations were offered up to $240,000/year so the pipeline could cross their territory. We'll accept this if Enbridge execs agree to freeze their pay at $240,000/year.

5. Play Big Brother: Gateway Edition, where Enbridge execs, Conservative Party MPs and one from the PMO live together at Unist'ot'en camp, along with First Nations, environmentalists and Mike Duffy.

6. Hug Neil Young like he's your brother and listen to "Harvest Moon" every night before you go to bed.

7. Put the North Pacific humpback whale back on the endangered species list. Or, PR-wise, you might as well go out on the ice and club a baby seal.

8. Re-hire all of the marine scientists you fired with triple back-pay. It's about the credibility of your tanker safety claims, guys. Cre-da-bi-li-ty.

10. Have Prime Minister Stephen Harper participate in the World Pride in Toronto wearing exactly the same outfits he wears to the Calgary Stampede.

11. Read my Canadian Law for Dummies. Did you know Canada has a legislative process? Re-writing laws with omnibus budget bills is apparently not part of it.

12. Appoint Marc Emery to the Senate.

13. Re-route supertankers far away from the Great Bear Rainforest. Is there no puppy you guys won't kick? Come on man, Spirit Bears!

17. For a party running on a job creation platform, the federal Conservatives sure fire a lot of people. Stop decimating the civil service to pay back money spent on F-35s.

18. List all the rivers and streams the Northern Gateway pipeline crosses and match them with the appropriate species-at-risk.

19. Name one island in the Douglas Channel.

20. Pinkie-swear that the Temporary Foreign Worker Program won't be used in the construction of the pipeline.

21. Invite Darryl Hannah to tour the tar sands in a Hummer.

22. Have Veterans Affairs Minister Julian Fantino invite vets into his home, feed them a nice dinner and listen politely while they discuss their concerns.

24. Have Harper hold one press conference with non-Sun Media journalists. If that's too intimidating, we'll accept an interview with Entertainment Tonight.

25. Have the JIG, CSIS & CSEC agents monitoring my Facebook page agree to be my tech support.

26. Resurrect Franz Kafka so he can write about the way the Canadian tax system is used to keep environmental NGOs, and, ironically enough, PEN Canada in audit hell.

27. Stop marking your friendly Indians with blue dots. I know we all look alike, but come on.

30. Talk to the people of British Columbia like we're your neighbours, not flaky terrorists impeding your manifest destiny. If this is the way you deal with people in the oilpatch, you can stay there.