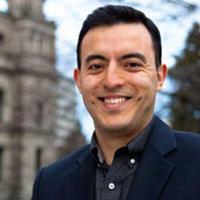 In a recent Globe and Mail commentary, the executive fellow for University of Calgary School of Public Policy (funded in part by Imperial Oil) writes that you simply can't build a nation by saying no to a pipeline.

It will bring us that ever-popular deity, prosperity. Prosperity for us, and for generations to come.

Now, I can already imagine the conversation (and here I paraphrase Calgary geologist and oil expert Robert Skinner, who made similar comments in 2003).

"Did you use fresh water to frack shale gas from British Columbia to boil water to make steam to melt tar out of the oilsands?"

"And then did you pipe that stuff raw to Beijing refineries so the Chinese could use more natural gas to turn the poor tar molecules into gasoline, so that they too can drive four-tonne vehicles five kilometres to sport clubs to spend 15 minutes riding stationary bikes?"

"And did you really call that a national project?

"And did you undermine your democracy with omnibus bills that gutted the Fisheries Act, the Canadian Environmental Assessment Act and the Navigable Waters Act to make it easier for pipeline companies to put our coasts and rivers at risk?"

I believe if Hall's view on the meaning of yes represents some of the thinking going on in Ottawa these days, then she has made things very easy for the rest of us.

As an Albertan, I know exactly what kind of conversation I want to have with my grandchildren, and so do most British Columbians. It begins with a no.

The folly of yes

I predict there will be a momentous clash of civilizations over this pipeline and its many cousins.

On the no side will stand the defenders of the nation's honour, or what's left of it: ordinary Canadians who care about salmon, water, democracy, treaty rights, coastal wildlife, First Nations, economic resilience and the future of our children.

On the yes side will gather the nation-sellers: the evidence deniers, the water polluters and petro-politicians who would embrace climate instability and acidify the oceans for a few oil dollars.

The no side calls for restraint and changes in energy consumption and production; the yes side demands business as usual in the name of greed, hedonism and self-interest.

A few years ago, the philosopher Nassim Nicholas Taleb spoke about corruption in the financial system. He warned that people who drove school buses blindfolded and crashed them (much like the folks running Wall Street) should not be given new school buses.

The same applies to energy systems and pipeline builders.

In 2010, Enbridge crashed a big pipeline in Michigan. The Kalamazoo bitumen eruption, the largest onshore spill in U.S. history, drove 150 families from their homes. The 20,000-barrel disaster cost more than $1 billion to clean up and counting. For months the company denied that it had spilled diluted bitumen.

Enbridge and the pipeline establishment lost their legitimacy with this catastrophic event.

Why would any fair-minded community risk their livelihoods and waterways to give such a company permission to build another pipeline over the world's most challenging and technically difficult terrain?

Building Gateway, of course, would also increase bitumen production in the oilsands. And therein festers another moral hazard: a record of national environmental neglect and another example of the folly of yes.

Here's what an unending string of yeses to Big Oil has done in northern Alberta. A ring of mercury now surrounds the mining operation.

Regulators have allowed industry to accrue a $20-billion public liability of toxic mining waste with a paltry billion-dollar corporate bond.

There is no plan to manage the fastest growing source of carbon emissions in the country.

Despite unprecedented changes to the hydrology of the region by steam plant operators, no effective groundwater-monitoring regime exists.

The reclamation debt is growing every year because restoring destroyed peat bogs and wetlands is almost impossible.

Every year, snow melt flushes all the dirt from oilsands air pollution into the Athabasca River.

The contamination amounts to an annual spill ranging in size from 5,000 to 13,000 barrels of bitumen. And yes, there is more.

Revenue from the project supports a 43-year-old one party state that spends money like an entitled adolescent, saves nothing, wears a Tea Party hat and acts like a national bully. You can't find a province composed of more yes-men and yes-women than in Alberta.

Building pipelines for such a bunch of sorry operators is a bit like loaning more money to banks peddling financial derivatives or constructing airports for drug dealers. Whatever it is, it is not nation building.

Taleb once noted that, "We become civilized only by knowing what to refrain from doing."

Jacques Ellul, the great French philosopher said the same: "A person cannot live deprived of truth and situated in fiction. Only the no produces change and advance."

The Christian philosopher C.S. Lewis believed that too.

"We all want progress," he wrote, "but if you're on the wrong road, progress means doing an about-turn and walking back to the right road; in that case, the man (or woman) who turns back soonest is the most progressive."

Coastal First Nations and citizens of B.C. have said no, and are now walking down the right road.

This road may take our economic life closer to our biological environment in which smaller companies prevail. And it may also change how much and what kind of energy we spend and for what human purposes.

It is a road of possibilities, one not engineered by Calgary pundits or authoritarian regimes, but carved by ordinary Canadians.