SYDNEY --- Back in simpler times, when a Bush was in the White House and Canada's David Frum toiled there as a phrasedick for conservatism, there was a comforting clarity about who the good guys and bad guys were. 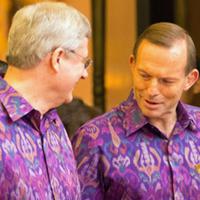 As sharp-minded readers will recall, Bush went on to comprehensively defeat Iraq and usher in a golden age of peace, democracy and sectarian stability there; Iran has since generously offered to put its nuclear program in service of the world's demand for medical isotopes rather than building nuclear weapons that might agitate Israel; and North Korea has become a haven for refugees from the National Basketball Association. All quiet on the Eastern front.

But worries have arisen in new quarters. Today, President Barack Obama is, like Bush before him, confronted with dangerous regimes that threaten America, and indeed us all, although not with the world's most dangerous weapons but with its most dastardly climate policies.

Abbott returned to Earth, or at least Canberra, earlier this week after a high altitude visit to the White House, where he somehow managed to avoid what Australia's commentariat assumed would be a diplomatic faux pas over climate policy. Obama, he of the 30 per cent emissions reduction target, met with Australia's Skeptic-in-Chief and unapologetic five-percenter, and afterwards uttered not one word about climate. Instead, the U.S. president, consumed by an emerging civil war in Iraq, chose to accentuate the positive with respect to a stalwart wartime ally. "Aussies know how to fight," Obama said, "and I like having them in a foxhole if we are in trouble."

Abbott, at first glance physically and politically more akin to a cane toad than a fox, can hardly have believed his luck. America's entire economy and so-called way of life is under dire threat from climate change, yet Abbott might as well be Ahmadinejad when it comes to being any friend of America's on that battlefront. Abbott has vowed to kill Australia's carbon tax in about as long as it takes to have an injection, has previously derided Obama as a flaming pinko when pandering for conservative votes at home, but somehow escaped Washington with a presidential seal of approval for his promise to pursue energy efficiency targets. Colour me confused.

More telling, more predictable, but more dangerous by half was Abbott's cringeworthy accommodation with, and of, our beloved Stephen Harper. Before snagging a hallway pass in the White House, Abbott had rated a red carpet in Ottawa. There, as one Australian columnist put it, "Abbott virtually announced an axis with Harper... to shoot down Obama's new efforts to take the U.S. into the lead on curbing carbon emissions, which will involve carbon pricing in one form or another, whatever Abbott says."

This new axis, of course, spins on an axle of unrepentant adherence to a centre-right agenda that extols job creation and growth of the expense of all else. It is also of a piece with a relationship between Canada and Australia that dates back to Harper's visit to Australia in 2005, when he sat goggle-eyed at the feet of John Howard who, in the words of the Australian Financial Review's Phillip Coorey, was then the world's "pre-eminent conservative head of government. Like Yoda, Howard inculcated the young Harper with his secrets of success -- demographically targeted tax cuts, empathy with the battlers, and never, ever stop campaigning."

A year after Harper was elected, Howard went to Canada for a love-in. A year later, Howard was gone, and Harper took on the mantle of the minder of world conservatism. Then Abbott spat his way to power in Australia, and quickly built what the AFR called "a fine bromance" with Harper, with whom he is "virtually inseparable on policy and philosophy. This extends to giving lip service to climate change, to a shared distaste for much of the media," writes Coorey, and, on the evidence of Abbott's trip abroad, virtually indistinguishable rhetoric when it comes to climate change and economic growth.

Cheering on Abbott for his promise to kill a "job-killing" carbon tax, Harper said: "No matter what they say, no country is going to take actions that are going to deliberately destroy jobs and growth in their country. We're just a little more frank about that."

Two days later, after ringing the bell at the New York Stock Exchange, Abbott parroted Harper: "I don't believe any other country will take action on climate change that will clobber their economy."

Harper and Abbott, in close up, appear like a couple of ampulex wasps mating on a David Attenborough film, but it's actually worse than that because these two provide their own narration in which they extol their love not just of each other, but of the natural world they are doing everything they can to destroy.

Harper, who just approved the Northern Gateway project in British Columbia, is the same creature who attempted to rebrand himself barely a month ago as a champion of the environment when he launched a National Conservation Plan that he said will "further position Canada as a world leader in conservation." This, for which the photo-op was him squatting in a full business suit and tie beside a muddy ditch with a couple of kids wielding tadpole nets. (How many eyes the frog will have, if it survives to adulthood, will be forever unknown to us because we don't do science in Canada anymore.)

Meanwhile, Abbott told ABC Radio after his meeting with Obama, "We all want to do the right thing by our planet. I regard myself as a conservationist." Like I said, a cane toad.

But such is the script for the Axis of Weasels. Abbott, having pandered to Obama by promising Aussie support for any battle except that against climate change, now gets to orchestrate a G20 meeting in Brisbane in November focused on economic growth where, if it comes up at all, climate change will be couched in terms of energy efficiency, period. Harper, having said yes to Northern Gateway, will continue to lobby for Keystone XL because, frankly, the country needs the jobs.

You want frank? If Obama is serious about tackling climate change, what makes either of these ideologues less dangerous to his agenda than Hussein, Khamenei and Kim ever were? Judging by the poor company he keeps, it is hard to take Obama very much more seriously than Harper and Abbott, but what's even more disconcerting is how little either of them seem to care what Obama says or claims he is going to do. Such is the waning power of Washington.

In The Saturday Paper here in Australia, world editor Hamish McDonald reflected this week on former conservative Australian prime minister Malcolm Fraser's advice that Canberra needed to act more independently of Washington. "This is hardly what he had in mind," McDonald wrote, given that it is now "a nasty new Canada" to which Australia looks for inspiration.

McDonald quoted Andrew Horvat, the veteran Canadian analyst of Asian affairs, as saying: "As always, Australia and Canada seem to be marching to the same tune. I have to say I much preferred the older tunes: multiculturalism, liberal attitudes toward refugees, environmental awareness, social justice, modesty and tolerance."

As Robert Graves would say, in Australia as in Canada, it's goodbye to all that.