"Lemme tell you the first rule of politics; Always know if the juice is worth the squeeze." -- The Girl Next Door, 2004 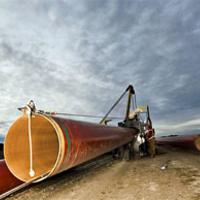 Despite British Columbia environmentalists, First Nations and others gearing up to launch a citizens' initiative petition to fight the Enbridge Northern Gateway pipeline, it's only electoral votes, not signatures that can stop it.

And with the federal Conservative government due to announce its decision today and expected to approve the pipeline with conditions, these groups have to ask themselves -- is the juice worth the squeeze?

B.C's initiative legislation, which is unique in Canada, allows voters to petition the provincial government to take action on almost any issue. But the law is completely toothless.

Even if successful against enormous odds, the initiative can be effectively ignored without government being forced to hold a province-wide vote -- despite misconceptions otherwise.

I know, because I was the strategist for Fight HST's successful initiative process in 2010, led by former premier Bill Vander Zalm.

That effort eventually ended with the 2013 repeal of the Harmonized Sales Tax imposed by Gordon Campbell's Liberal government. The initiative was a critical part of the campaign.

But our victory depended on Campbell's multiple miscalculations, including his decision to hold a binding referendum in 2011 -- not simply because voters flocked to sign the first and only Initiative to pass since the process began in 1994.

That's where the Dogwood Initiative -- the group's name, not campaign -- runs into trouble.

Provincial legislation gives the government the choice of what to do if an initiative reaches the incredibly difficult threshold of gaining the signatures of 10 per cent of registered voters in every one of B.C.'s 85 ridings in only 90 days.

The government can indeed chose to hold an initiative referendum, but the results are not binding.

Or it can simply introduce the bill proposed by the petition into the B.C. Legislature, but not even debate it, let alone pass it.

Environmentalists could spend months and many dollars organizing signatures only to either fail to get enough of them in every riding, or even if they do, be ignored by the legislature.

That's one heck of a lot of squeeze for no juice.

The more optimistic view is that a huge campaign will generate significant attention and shape public opinion, forcing reconsideration and rejection of Enbridge's pipeline before it breaks ground.

But those planning the initiative seem to be overlooking the fundamental flaws in the process -- that a referendum is not required by passage and is non-binding.

"We are currently drafting legislation which, if introduced via a citizens' initiative, would ensure B.C. uses its legislative authority to keep our rivers and streams free from Enbridge oil," said Jessica Clogg, executive director and senior counsel of the West Coast Environmental Law Association, in a June 16 news release.

They also appear to forget that the initiative process doesn't in any way affect the federal government, which has the jurisdiction to approve the pipeline.

While Premier Christy Clark might be encouraged to stand up against Prime Minister Stephen Harper on Enbridge if the petition is successful, she can't block it indefinitely.

More worrisome for Enbridge opponents is the dangerous risk that their petition fails, like last year's Sensible BC campaign for marijuana decriminalization did, despite garnering 202,037 signatures.

An Enbridge initiative failure could embolden both the B.C. and federal government to see it as a big win for Big Oil and ignore further opposition.

Even a very respectable campaign result that gains hundreds of thousands of signatures but can't match the 713,883 delivered by Fight HST to Elections BC on June 30, 2010 will be seen as a setback.

Remember that signatures have to be verified by Elections BC. In 2010, the final Fight HST number was 557,383. In the Abbotsford South riding, the margin of error was only 599 signatures, and missing one riding causes the whole effort to crash.

The reality is that the citizens' initiative is a challenging tactic designed by a previous NDP government to fail, and was never fixed by a subsequent BC Liberal government that promised to do so, but still hasn't in 13 years. Nor will it.

The initiative's flaws mean that only federal election votes in 2015, which defeat the Conservatives, can stop the pipeline.

And in an election versus a citizens' initiative, the squeeze is definitely worth the juice.