Metro Vancouver plans to evict longtime residents of seven historic cabins in Belcarra Regional Park at the end of June, despite strong opposition from tenants and local governments. The homes will likely be demolished and replaced with a picnic area unless residents win an appeal to Metro's environment and parks committee this Thursday, June 5. 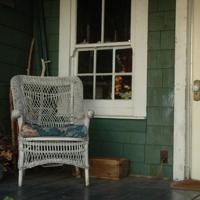 In Belcarra, the Rustic Cottage Is under Siege

For resident Jo Ledingham, 73, Metro's plan to demolish the buildings would not only take away her home for the last 50 years. It would destroy a rare and charming remnant of the Lower Mainland's summer cottage heritage, and ignore requests from two municipalities that Metro Vancouver retain the buildings and involve local governments and residents in developing a plan for the heritage-worthy structures.

Port Moody Mayor Mike Clay wrote to the Metro Vancouver board of directors on May 21 to say that Metro Vancouver parks staff is working from an outdated parks-use plan from 1994, which is not supported by Port Moody city council. "This draft included additional parking for over 200 vehicles, a new dock, and removal of substantial natural and forest space," reads the letter. "As council, we do not support this plan, and in the nine years I have been on council I have never seen this plan before."

He added that the Metro Vancouver board "has not fully considered the historical significance of the cabins, beyond their 'structural' significance. We believe the cabins provide a connection to our history that should not be forgotten, nor removed." He wrote that the board should reconsider its decision to demolish the buildings and that his council wants explore whether Port Moody or another government or group might maintain and preserve the cottages.

As reported by The Tyee in May last year, the Belcarra South Preservation Society, which represents the residents, wants to improve public access to the beach in front of the modest homes and sees the buildings and the community as living history that deserves protection.

However, Metro Vancouver's environment and parks committee made a closed-door "in-camera" decision a year ago on the staff's plan to evict the tenants, details of which were not made public. The issue then proceeded to Metro Vancouver's board, and on Oct. 25, after its own closed-door meeting, it "reconfirmed" a 1985 park plan and 1994 picnic area design that determined "providing public access to the waterfront is the priority program and the Belcarra South cabins [should] not be retained." 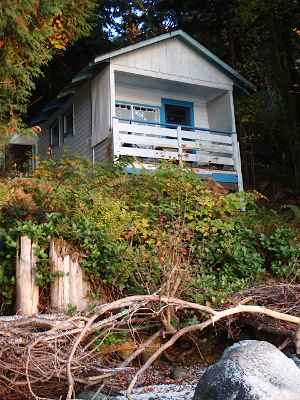 Metro Vancouver's in-camera decision to demolish the cabins cites public access to the waterfront as a priority. Photo of Wee Cottage courtesy of the Belcarra South Preservation Society.

Belcarra Regional Park, located across Indian Arm from Deep Cove, straddles the boundary between the City of Port Moody and the Village of Belcarra, as does the quaint row of cottages. The Village of Belcarra council opposes the removal of the cottages and, in a May 12 letter to senior parks staff, declared it strongly supports a March 27 proposal "to provide unique public programming, reinforcing the special place held by the Belcarra South cottages." Port Moody, says Ledingham, is in the process of putting the buildings on its heritage register.

The Belcarra society proposed to continue to maintain and manage the buildings, provide park programming, create juried artist-in-residence access to one of the cabins, assist in landscaping the nearby Bole House (now boarded up and awaiting renovation by Metro) and create access through the properties to Cabin Beach (a pocket beach already accessible except at high tide along the shoreline).

Ledingham, a veteran theatre critic for the Vancouver Courier, says Metro should protect one of the last remnants of the modest vacation homes once widespread in the region. The cabins, which were built between 1912 and the early 1930s, survived because of the park, as others fell to a wave of often extravagant suburban waterfront development. "Today, the Belcarra South cabin community is the only surviving example of the numerous cottages that lined the shores of Burrard Inlet," wrote veteran heritage analyst Don Luxton, in a May 2014 statement of significance commissioned by Port Moody.

Ledingham, who had a summer place further up Indian Arm until she arrived at Belcarra in 1964, thinks Metro should take a page from other examples of homes in parks and use them as a way to preserve history, avoid maintenance costs, derive rent, and enjoy free park custodial benefits. Examples of private homes on public land range from the summer cottages on Canoe Lake in Algonquin Park and the homes on the Toronto Islands to cabins in West Vancouver's Cypress Provincial Park, as well as any number of caretakers' residences in British and European parks and trust lands.

Beyond that, Ledingham is concerned about practical matters. She wonders if by boarding up the cottages in the remote park at the beginning of summer, Metro puts the cabins at risk from vandalism. She questions the legality of the eviction. And she is disappointed by the lack of public process. She believes local municipalities and residents should have a say in the shape of a park in their community.

However, parks staff, one of whom maintained a year ago that the local municipalities had no objection to the evictions, has not wavered from its longstanding plan to remove the buildings.* 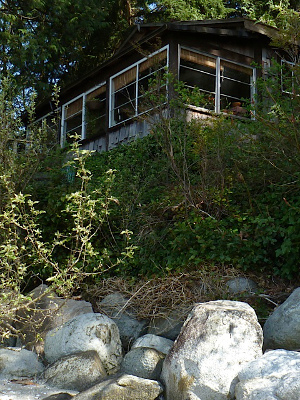 In a letter to Ledingham dated May 29, Mitch Sokalski, director of Metro Vancouver's regional parks, states that "shortly after June 30, staff will be proceeding to secure the facilities where utilities will be disconnected and doors and windows will be closed and secured." He adds the Belcarra society's proposal "does not offer or provide opportunity for general public use and enjoyment of the cabins, parkland, or provide unrestricted access to the beach both in the short and long term."

Regarding the letter from Belcarra and Port Moody, he wrote that there is no timeline for such discussions and he is "uncertain as to the outcome." When contacted by the Tyee, Sokalski said he wished to wait until after Thursday's meeting to comment.

Ledingham wonders if her eviction, should it come to that, might be curbside: Metro staff boxing up the possessions of a senior citizen, to remove her from the house in which she has lived for most of her adult life.

Ledingham doesn't put much stock in the idea that future of the buildings can be properly considered without the current tenants. In the absence of their advocacy, she figures it would be much easier for Metro staff to demolish the buildings.

A year ago, parks staff shelved a 2012 estimate they commissioned that determined Ledingham's house needs $10,600 in repairs, and commissioned a new heritage restoration report that declared it requires $100,000 in work. Ledingham, who would gladly maintain her home if she knew she could stay, believes without the tenants it would be easier to build a case that the buildings are too costly to keep, and disputes park staff's past insistence that the buildings are in serious disrepair.

Ledingham points out that Don Luxton's statement of significance talks not just about the buildings but also about the heritage of the cottage community. "We're probably the last," she says. The Belcarra South residents provide a self-sustaining, off-the-grid, modest, custodial, community-minded, cost-effective form of living history that brings charm and interest to a regional park.

According to Metro, we can't have that.

An exhibition of photographs and paintings of the Belcarra South community is on view at the Port Moody Public Library for the month of June.

*Has been corrected for attribution.