For owners of Magnolia trees, spring is a heady season. On the west coast, the blooming of Magnolia flowers is a sure sign that we are shaking off the long, wet monotony of winter. They burst forth early with splashes of colour and a powerful scent, and then almost overnight you find yourself sweeping up petals that have browned and fallen to the ground, their decay redolent of a cheap toilet cleaner. 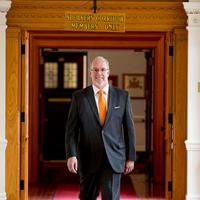 Who Is John Horgan?

So it is with the provincial NDP.

There is never a good time to turn over the soft, dank mound of compost that, when disturbed, purports to offer not just loyal Opposition to the governing Socreds in Liberal clothing, but a viable alternative at the ballot box.

Having sleepwalked through an entire year after being humiliated by Christy Clark, the NDP has finally shown sufficient signs of life to have ditched dithering Dix and hitched hortatory Horgan to its broken wagon. It matters little whether John Horgan has signed on as a teamster whose job it is to drive the wagon, or as a mule to drag it. What the NDP needs is a wainwright, someone who knows to fix the infernal thing.

"We haven't collectively sat down as a group and figured out where we go now," Horgan told The Globe and Mail's Justine Hunter after describing the time since last year's election loss as a year-long "void."

Well, if Horgan plans to fill that void with anything other than a vacuum, he would do well to start in a policy area that he should know something about: energy.

He got off to a rippingly unoriginal start a few weekends back, when he put out a statement to coincide with a national day of action against Enbridge's Northern Gateway project: "B.C.'s New Democrats are standing with communities and First Nations all across B.C. who are opposed to the Enbridge heavy oil pipeline. We know it would put our land, air and water, and northwest B.C.'s world-class outdoor recreation resources at risk... British Columbians are looking for a government with the vision to pursue new forms of energy to power our future. Premier Clark's BC Liberals are not that government... They have abandoned any real action to fight climate change."

True enough. But who hasn't? What energy-producing jurisdiction in the world has actually had the jam to really step up and acknowledge and act upon the undeniable evidence that we are barreling towards utter climate catastrophe?

(News break as I write this: "The collapse of the Western Antarctica ice sheet is already under way and is unstoppable, two separate teams of scientists said on Monday" [New York Times]; meanwhile, "U.S. climate study raises concerns for B.C. [Globe and Mail]; to say nothing of recent and direr predictions from the Intergovernmental Panel on Climate Change.)

Where might "real action" to fight climate change find a home with the NDP? Opposing Enbridge is easy, because the public's antagonism towards it is so obvious that even the apparatchiks on Kingsway figure there is nothing to lose there.

But if the NDP claims to have a "vision to pursue new forms of energy to power our future," then riddle me this:

• Why not also take a stand against Kinder Morgan's plans to twin its pipeline from Alberta to Burnaby? Where was that in John Horgan's "defend our climate" statement? Certainly the crowd at Sunset Beach saw Enbridge and Kinder Morgan as kindred evils, but Horgan, taking the same stance that Adrian Dix did, and then didn't take last year, wants to wait for the outcome of an environmental impact review.

• Meanwhile, Horgan supports the LNG sector, but hedges by saying he wants to see a scientific review of groundwater impacts.

• Oh, and he's not per se opposed to the building of Site C, the massive dam on the Peace River that would flood prime farmland and "cause significant adverse effects on fishing opportunities and practices for First Nations," according to an environmental review panel that reported last week. Aboriginal fishing rights, as with hunting and trapping, are constitutionally protected and Site C's effects on all of them, according to the review panel, "cannot be mitigated."

• Meantime, I'd be curious to know what Horgan's stance is on coal exports, and how coal fits into a provincial portfolio of "new forms of energy." Because it just doesn't.

And there's the rub, eh?

Right now, B.C.'s economy is at least partially built on doing and making worse what Horgan claims he won't, which is putting our land, air and water at risk. Added to which we are wholly complicit in aiding and abetting the export of our own and Alberta's dirty fuels that exacerbate the climate risks globally.

Make BC a climate world leader

Horgan says the NDP hasn't figured out "where we go now."

I suppose he can try and out-hard-hat Christy Clark, and have the NDP go root around for some of its long-lost working-class street cred. But the Liberals have outfoxed the NDP and, however galling and illogical it may seem, have figured out how to speak for hard-working B.C. families and the good-paying industrial jobs that will keep them from all moving to Alberta, and how to lie to the rest of us.

Going down the same rat-hole as the Liberals -- championing industrial development, but claiming to "balance" that against protecting the environment and respecting the rights of First Nations -- is a sure way for the NDP to stay in the electoral wilderness.

The only distinctive, and frankly the only honest thing Horgan can do, is to start right now on planning how British Columbia becomes a world leader in the fight against climate change. That means saying no to Enbridge, no to Kinder Morgan, no to fracking, no to LNG exports, no to Site C, and no to expanding our coal exports. In fact, no to coal mining once and for all.

It might take longer that the current legislative term for the NDP to produce a viable plan for B.C.'s clean energy independence, and the regaining of our economic and social sovereignty that would come with that. But since there's little likelihood the NDP will win an election in three years time with the tired tropes that have got it nowhere for half a generation now, why not spend the time in Opposition vigorously opposing our descent into climate chaos, and harnessing the NDP wagon to a world-leading strategy for a clean energy future? An actual one, not just another serving of petro pablum.

There will be plenty to say yes to along the way, all manner of incentives and opportunities to position B.C. as the best place to invest as more and more institutions follow the lead of Stanford University, which last week said it would divest any of its holdings in as many as 100 publicly traded companies for which coal extraction is the primary business.

British Columbians know the jig is up on our carbon-saturated economy. There is a real appetite, dare I say a craving for articulate, trustworthy, serious and disruptive leadership around this issue, which is the issue of our time and our place. Horgan's first official event? To go to Western Stevedoring's terminal in North Vancouver and don not just a hard hat, but steel-toed boots. Good thing about those boots, because without the courage to lead, John Horgan's NDP seems locked and loaded for a long season aiming at its own foot.