The federal government, that is Stephen Harper, is expected to announce its long anticipated decision on Enbridge's Northern Gateway pipeline sometime in June. The decision could well determine whether or not the Conservatives can win the 2015 election. 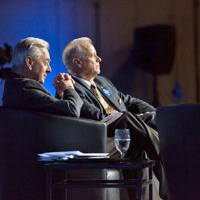 The momentum of opposition to the pipeline -- and perhaps more importantly to the hundreds of supertankers that would move tarsands bitumen to Asia -- is clearly growing in both B.C. and the rest of Canada. This makes Harper's absolute dedication to the oil industry, and his dogged commitment to the pipeline in particular, tantamount to a suicide pact. This is a pipeline that will never be built. It is already dead. But don't assume Harper sees that. His decision, as many of them are, will be a war between his highly touted strategic genius and his narcissistic impulses -- revealed by a pattern of rejecting defeat until reality can no longer be denied.

Harper's advantage over his political opponents is also his disadvantage. He is far bolder than any opponent he has ever faced. He is a huge risk taker. But risk taking is not in itself a virtue. Indeed, some of the biggest risk takers are psychopaths, and you certainly wouldn't want one of those running your country. A recent study out of Vanderbilt University "shows that people with psychopathic tendencies (like aggression, lack of empathy, lack of fear) are more prone to take excessive risk without considering the consequences," reports Business Insider, "It's not just that they don't appreciate the potential threat, but that the anticipation or motivation for reward overwhelms those concerns."

What motivates Stephen Harper's risk taking? The rewards for some of Harper's most excessive actions would seem as much personal as political. Consider the long list of attacks on high profile, credible government and agency figures. As Susan Delacourt helpfully documents in the Toronto Star, these include "Chief Electoral Officer Marc Mayrand, vilified for getting in the way of Fair Elections Act and former auditor-general Sheila Fraser, for the same offence. Then there's the former parliamentary budget officer Kevin Page; former chief statistician Munir Sheikh; former nuclear safety commissioner Linda Keen; former RCMP public complaints commissioner Paul Kennedy; former veterans' ombudsman Pat Stogran; as well as Marty Cheliak, ex-head of the gun registry; R&eacutemy Beauregard, the late head of Rights and Democracy; Adrian Measner, former head of the Canadian Wheat Board; and Richard Colvin, the former Canadian diplomat who spoke out on Afghan detainees."

Many of these vicious attacks may have had some anticipated political reward but the biggest motivator would appear to be simple revenge -- the consequences be damned (or unimagined). And these were before Harper decided to take on two institutions even higher up the institutional and political ladder: war veterans and the chief justice of the Supreme Court. As Delacourt argues, Harper seems not even to be seeking advice anymore. He has concluded that he's not just the smartest guy in the room. He's the only guy in the room.

As for the oil industry and two pipelines critical to tarsands expansion, even here, where Harper has made a political life or death commitment, his actions have seemed oddly irrational if not totally reckless. Harper is so contemptuous of Barack Obama -- the man with his hand on the Keystone XL guillotine -- he cannot even bring himself to act in such a way as to make it easier for Obama to say yes. The mouse telling the elephant that a decision is a "no-brainer," then trumping himself with "we won't take no for an answer" calls into question whether Harper's assumed strategic genius is really hostage to his emotions. Meanwhile, Harper refuses to do anything at all about emissions from the tarsands, something the White House (and the EU) have been seeking in order get the dirty oil flowing.

On virtually every aspect of the pipeline file, specifically Northern Gateway, Harper seems to believe he can will the result he wants. Until very recently he has treated First Nations with disdain and slandered environmental groups -- his two most powerful and intractable opponents. Given the geographic distribution of votes in this country, B.C. voters will most likely determine the outcome of the next election. And where does Harper decide to have an unwinnable showdown? Well, B.C., of course. And if you think the pipeline and tanker issues are hot now this is just early spring on the issue. Once Harper gives the go ahead the very long and very hot summer will begin in earnest and will last until election day.

In a last desperate effort to imitate rational policy before he makes the inevitable decision, Harper has tossed out a couple of crumbs to those concerned about the environmental impact of the pipeline and resource development. But the efforts are so transparent and inadequate that they simply draw attention to his appalling record. Harper just announced a $252-million, five year plan to "strengthen the conservation and restoration of ecologically sensitive land and waters throughout Canada." This after unapologetically gutting environmental protection of over 95 per cent of Canadian waterways.

The government is also increasing the maximum liability oil tanker companies will face for oil spills from $161 million to $400 million -- ignoring the main recommendation of a tanker safety expert panel that "the oil cargo industry should be responsible for the full costs of spills... with no limit per incident."

There is also a plan to establish a $1.61 billion fund from levies imposed on tanker companies. The $400 million limit (and the $1.61 billion fund) are laughable when the you examine the Exxon Valdez disaster, the closest existing example of what a spill cleanup would cost. Exxon paid $3.8 billion in cleaning up the spill of 250,000 barrels of oil. And those were 1989 dollars. The VLCC class super tankers that would transport tarsands crude from Kitimat would be carrying 2,000,000 barrels in the most dangerous waters on the planet. A 2012 UBC study estimated the cost of a cleanup off B.C.'s northern coast at $9.6 billion.

Harper's dogged commitment to protecting some of the largest and most profitable corporations in the world from liability for their own misdeeds is in itself irrational. He likes to describe Canada as an energy superpower but all the other energy superpowers are nation states that have long ago nationalized their oil. That's what gives them power. Canada is a superchump, given that the only energy superpower here is the oil and gas industry itself. Canada and its government have ceded all power to the industry. The cost to Canada and its economy is huge, and for Harper, whose only source of credibility is now the economy, that is dangerous.

As The Tyee's Mitch Anderson reported, a recent IMF report reveals that the after tax subsidies to the oil and gas industry in this country are a staggering $34 billion a year. Most of this is "the externalized cost of burning transportation fuels like gasoline and diesel -- about $19.4 billion in 2011. These externalized costs include impacts like traffic accidents, carbon emissions, air pollution and road congestion."

Many of these costs could be recovered by taxing the industry as is done in the EU, and by committing to mass transit.

According to Anderson, "Canada provides more subsidies to petroleum as a proportion of government revenue than any developed nation on Earth besides the United States and Luxembourg." It is not only individual citizens who pay those subsidies, it is all the other business sectors in the country -- the ones who depend on a viable infrastructure, high educational standards and healthy workers.

As a result, Harper's claim to be the master of the economy is starting to fall apart. His obsession with the oilsands and his neglect of the rest of the economy is coming back to haunt him. The Bank of Canada just released a report revealing that Canada's job recovery has been seriously overstated by the government. Polls show that the interminable "Canada Action Plan" ads are now just annoying people.

The government's one rational economic effort, its $14 billion infrastructure program, is in such disarray that a whole construction season may well be lost due to confusion amongst municipalities regarding how to access it.

The Temporary Foreign Workers Program is a disaster for many reasons. One is that the promised (and politically critical) reforms to the program are being cited as a major stumbling block to trade deals with Europe and India. Both include generous provisions for European and Indian companies to import their own nationals to work in businesses they establish here. Cuts to the TFWP are generating complaints.

To add to the government's woes, the latest Statistics Canada jobs report for April showed a net loss of 29,000 jobs. And it was the composition of those losses that should have the Harperium sweating. All of the job losses were concentrated in full-time employment. An increase in low paying jobs actually made the situation look better than it was. Losses in the highest paid sectors were serious, with "finance, insurance and real estate (down 19,000), professional, scientific and technical services (down 10,000), natural resources (down 7,000) and utilities (down 5,000)... "

If Stephen Harper was really a strategic genius he would have either done a much better job of selling the Northern Gateway pipeline or he would have found an exit strategy. But his genius, as always, has a nasty little virus attacking it. Harper's outsized self-regard, contempt for his adversaries and his inability to appreciate the consequences of excessive risk are slowly creating a perfect election storm -- a failure to achieve tarsands expansion and a crumbling economic recovery.

Stephen Harper hates losing, maybe even more than he likes winning. If that's the case he may well resign rather than face the humiliation of defeat on his single most important commitment.