There is an old adage in business that you don't get what you deserve, you get what you negotiate. And there are few businesses bigger than Big Oil. The top 50 petroleum companies collectively have annual revenues over $5.6 trillion. 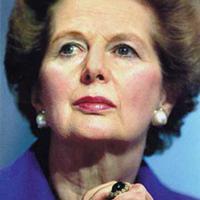 The Verdict on Thatcherism Is Clear

Subsurface mineral rights worldwide typically remain the property of sovereign nations, and oil companies only access that bounty through negotiated leases. You can imagine these negotiations are high stakes affairs. With potentially trillions of dollars on the table, both sides have a lot to gain and a lot to lose.

There is no doubt that some countries are blessed with easily accessible high-grade oil and can dictate more favorable terms. Others nations with low-grade or high-risk resources are in a weaker negotiating position.

While different nations use a variety of complicated taxation and royalty schemes to calculate future revenues, it is simpler to look backwards to see the revenue to the taxpayer per barrel of oil equivalent. This eliminates price fluctuations in a given year and also includes natural gas production, which is often a big part of petroleum production.

Canada taken to the cleaners

Norway and the U.K. are a particularly pointed example of two countries exploiting the same oil at the same time while one is clearly benefiting more than the other. Both countries also helpfully list their production and public revenues back to the 1970s, so it is simple to calculate what the taxpayer took home per barrel in any given year.

Digging through the numbers, it seems Norway is considerably more skilled at negotiation. By charging higher taxes and investing equity ownership in their own production, the Norwegian taxpayer was paid $46.29 BOE in 2012. That same year, the U.K. taxpayer realized only $20.08 per BOE -- less than half as much.

What about Canada? Much of our production is bitumen, which admittedly is a lower value (and often unprocessed) product with higher extraction costs. That said, it seems the nicest nation on earth is being taken to the cleaners. In 2012, Canada produced more than two billion BOE and collected $18 billion in provincial and federal taxes and royalties. This means that the Canadian taxpayer realized a benefit of about $9 per BOE -- less than one-fifth what Norway collected in the same year.

Canada produces 45 per cent more petroleum than Norway. Imagine for the sake of argument that Canada collected what Norwegians did between 2009 and 2012. In those four years, Canada would have enjoyed revenues of $365 billion -- enough to pay off more than half of our national debt.

Provincial race to the bottom

Instead, Canada is one of the cheapest places in the world for Big Oil to do business. A recent presentation by an international oil expert to the Alaskan government ranked Nova Scotia and Newfoundland as dead last in the world for public share of shallow water offshore oil operations. This is perhaps not surprising given the relative puny size of our provincial governments compared to the interests they sit across the table from.

Based on annual revenue, those 50 top oil companies are collectively 750 times larger than the government of Newfoundland and almost 130 times larger than the collective might of Albertan taxpayers. It's also difficult to attract talent to the public side of the table when the private sector pays so much better. The premier of Alberta brought home one per cent of the salary paid to the CEO of Suncor in 2011.

Every provincial jurisdiction is also in direct competition with each other in a race to the bottom to attract private petroleum investment. Internal government documents accessed by the Alberta Federation of Labour found that B.C., Alberta and Saskatchewan charge lower royalty rates than any U.S. state. Bizarrely, this was framed as a public policy achievement.

Since our country has an every-province-for-itself negotiating strategy, job strapped jurisdictions are not only contending with immensely powerful outside forces, but their own angry electorate every few years. It's hard to drive a hard bargain when voters can be maneuvered to take up industry's negotiating position. Nothing motivates a politician quite like the prospect of electoral defeat, and voters have become enlisted as unwitting allies in the billion-dollar brinksmanship of industry to access resources at ever-cheaper prices.

This long-term strategy is bearing some very lucrative fruit. The incumbent Conservatives almost lost the last Alberta election because they were allegedly demanding too much from the oil sector. For the record, Alberta produced about 1.5 billion barrels of oil equivalent in the calendar year 2012 and collected $6.13 billion in non-renewable royalties. That works out to a measly $4 per BOE -- less than one-tenth what Norway collected on its petroleum volume that same year.

Every indication is that the Wildrose Alliance will form the next provincial government in Alberta. The oil-friendly party promises to "create and maintain royalty and tax regimes that attract and sustain investment in our energy industries."

And that, in the negotiation business, is what you call an "end game."