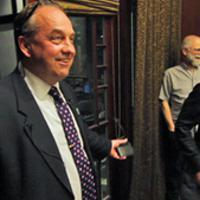 The fundamental problem facing the B.C. New Democratic Party is simple to state and hard to solve: going green has browned off key voters needed to form government.

And as the leadership race begins with veteran MLA Mike Farnworth announcing his candidacy Sunday, he and his likely competitor, MLA John Horgan, have to address a growing split in the party that comes back yet again to B.C.'s classic jobs-versus-environment debate.

Environment-minded New Democrats are the first to say we can protect the environment and create jobs, too -- just like going to heaven without dying.

But if they really mean rejecting oil and gas pipelines and projects, ditching the Site C dam proposal, kiboshing mining and exports, fighting fracking for natural gas, and preserving forests from logging, then the NDP is doomed to an extended stay in opposition.

British Columbia won't prosper if its main industries are tourism, film and television and high tech alone, valuable though they are to the economy.

Yet it's corporate taxes and income taxes from workers in the oil and gas, forestry, mining and other sectors that help pay the salaries of teachers, doctors, nurses, hospital, municipal and provincial government workers, all of whom play vital roles.

Public sector employees and other urban professionals are often the loudest in demanding a stop to resource sector projects on environmental grounds. But while everyone wants ecological heaven, no one wants to accept the need for resource extraction to keep improving needed services and their wages.

Port Coquitlam MLA Farnworth seems to understand the daunting conundrum the NDP faces. He said that outgoing leader Adrian Dix's decision to oppose the proposed twinning of the Kinder Morgan oil pipeline, announced in the middle of the May 2013 election campaign, was a big mistake that cost the party key suburban and rural ridings.

"I think many voters said, 'Wait a second. Resource development is important and these are our jobs,'" Farnworth told The Province's Michael Smyth. "It allowed the Liberals to characterize us as a party without an economic vision."

"We have lost our way when it comes to speaking to resource-dependent communities. There is a chasm between the Coast and the Kootenays that is not represented by the NDP," Horgan said in Oct. 2013 when announcing he wouldn't run for leadership, a decision he's now reconsidering.

Or not green enough?

Harold Steves is a Richmond city councillor and respected former NDP MLA in Dave Barrett's 1972 to 1975 government, which introduced the Agricultural Land Reserve against huge opposition. The reserve has stood the test of time, though is challenged once again today by the BC Liberals.

Steves said after the May election that the NDP was simply not green enough for him.

"What has been missing from the NDP caucus is a strong environmental presence," Steves told The Georgia Straight in Sept. 2013.

Steeves pointed to Vancouver-Fairview MLA George Heyman, a former executive director of the Sierra Club in BC and ex-BC Government and Service Employees Union president, as a potential leader, but Heyman will not run.

Though environmentalists like Ben West of ForestEthics and Tzeporah Berman endorsed Dix's anti-Kinder Morgan position when announced mid-campaign, after the election they criticized Dix for not "selling" it better -- in rather ungracious thanks for listening to their lobbying.

"I think Adrian Dix did a lousy job of explaining why he opposes the Kinder Morgan pipeline," West said in Oct. 2013.

West went further in November in The Georgia Straight: "The truth is that Dix didn't take a position on Kinder Morgan before the election, and he never really took a clear position during the election either."

Did West read what he himself and Berman said after Dix's announcement on Kinder Morgan? "The BC NDP have also taken a strong stand against increased oil tanker traffic on our coast and the Enbridge Northern Gateway and Kinder Morgan pipeline proposals," Berman wrote after Dix spoke.

But like West, Berman was quick to blame the NDP after the election. "People were nervous about the way it was rolled out," Berman said in November. "In the future, the BC NDP need to clearly articulate the kind of economy they want to create -- about what the party is saying 'yes' to."

Along with David Suzuki, Berman had previously trashed the NDP during the 2009 election campaign over its opposition to the BC Liberals' carbon tax in a calculated and transparent attempt to influence the results.

The uncomfortable truth is that environmentalists' pressure on the BC NDP to go greener has not resulted in a delivery of votes, and arguably cost the party the last election.

Greens not gaining from NDP

Despite arguments that the NDP must get greener to win power, in fact the B.C. Green Party has seen its percentage share of the provincial vote shrink from the 2005 to 2009 to 2013 elections, despite a historic breakthrough for Andrew Weaver in Oak Bay-Gordon Head to become the first Green provincial MLA in Canada.

In that riding, the Greens replicated the federal consolidation of resources strategy that helped elect Elizabeth May in Saanich-Gulf Islands for the party in the 2011 federal election.

But to find multiple star candidates and the financial and human resources to back Greens in several provincial ridings to challenge both NDP and BC Liberal incumbents likely won't be possible by 2017.

That means the contest will again see the NDP and Christy Clark's BC Liberals face off again over jobs and the economy.

If the NDP doesn't find the appropriate balance between protecting the environment and supporting B.C.'s critical natural resource sector, the 2017 election may not even be close.