"Dream no little dreams," Tommy Douglas was fond of telling us. As premier of Saskatchewan and leader of the federal NDP, Tommy was true to his words -- delivering the first publicly funded health care system in North America while balancing 17 consecutive budgets. 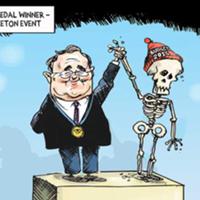 In his latest piece, "NDP Needs Big Ideas to Win," Tyee and Rabble columnist Murray Dobbin rightly points out that successive Liberal and Conservative governments have emptied the federal coffers by doling out billions in wasteful corporate tax giveaways while doing nothing to stop the growing income inequality in our country.

But I think he missed the mark when he went on to attack New Democrats for not having big ideas. We got' em in spades, Murray, and I'm proud of them!

We are the only party that has had the courage to advocate a return to pre-Stephen Harper corporate tax levels. It is a position that so incensed Finance Minister Jim Flaherty and his big business friends that he fired off a letter to NDP leader Tom Mulcair warning, as Conservatives tend to do, of economic catastrophe.

And while the old-line parties are arguing over who loves the Keystone XL pipeline more, I watched Tom Mulcair stand up at the Economic Club of Canada and take on Big Oil, reconfirming our commitment to a cap-and-trade price on carbon and an end to the perverse subsidies to polluters that discourage investment in renewable energy.

Now that was bold.

In recent months, we alone launched a national petition campaign to push for quality child care that's affordable for families. We joined with First Nations leaders to repeat our call for an immediate inquiry for the hundreds of missing or murdered indigenous women. And we have led the charge against Stephen Harper's attempt to import voter suppression tactics from the U.S. Republican playbook through his so-called Fair Elections Act.

From developing a national housing strategy to bringing forward real solutions to fight climate change, the NDP is the party of big vision in Canada.

With all of these big ideas, New Democrats have taken our case directly to the people -- at town hall meetings, in social media conversations and at the doorsteps and kitchen tables of Canadian families.

These are bold -- and uniquely New Democrat -- ideas.

Maybe to some of us, paying $3 at an ATM is no big deal; we laugh and say we're "lazy" for not going to our own bank, so it serves us right. But when you live on income assistance to the tune of $6/day, in a neighbourhood with no banking services except a private ATM, it's a pretty big deal.

To the millions of Canadians who are struggling with record levels of household debt, getting nickel and dimed at bank machines and gas pumps is not "trivial," despite Murray's cavalier dismissal. The average family now owes a staggering $1.65 for every dollar it takes home. And those with fixed and lower incomes simply cannot afford all the unfair fees and extra charges everywhere they turn.

New Democrats chose issues of affordability for our first National Day of Action because these pocketbook issues have a very real effect on everyday life. As I knocked on doors in Halifax, the response from people was incredible. One person said he didn't care about politics and knew nothing about the parties, but if the NDP would put an end to predatory payday lenders, he'd sign up.

At other places, people excitedly knocked on the doors of their roommates to get them out to sign our petition. We connected with new people who self-identified as not "caring" about politics: but they cared enough to support our campaign. It was so inspiring!

We can take on these well-connected interests to deliver practical results that will make a real difference for the average Canadian. It's a message that is resonating. And it is resonating with many Canadians who have not previously considered voting NDP. It is opening doors and bringing new people into our movement! It is strengthening us, and getting us closer to forming Canada's first social democratic government and actually building the country of our dreams.

We can keep our eyes on the bigger goals too; making sure everyone pays their fair share so we can finally build that fairer, greener and more prosperous Canada -- where no one is left behind.

In 2015, Tom Mulcair's New Democrats will be able to offer Canadians what neither the Liberals nor Conservatives can: a chance to vote for the kind of change you want, and actually get it.

I think Tommy would be proud that we still "dream no little dreams."