Here is PressProgress's countdown of 13 Harper fails of 2013. 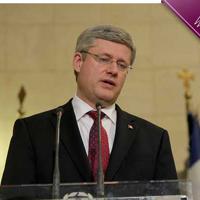 This year marked another dismal performance at the UN climate change conference in Warsaw, where Canada was awarded a special Lifetime Unachievement Fossil Award.

Speaking of the UN, the Conservatives refused to back an international arms trade treaty to keep weapons shipments away from extremists. Worse, they parroted the talking points of the National Firearms Association, citing concern for domestic gun owners, to justify their decision.

And don't forget about Canada's new "economic diplomacy" so all diplomatic assets "are harnessed to support the pursuit of commercial success by Canadian companies and investors."

Building on a concerted effort to intertwine conservative values with government icons, the Canadian Museum of Civilization is now the Museum of Canadian History. Its new mandate is to focus on the country's history and identity; promoting a "critical understanding of human cultural achievements and human behaviour" is gone.

This freshly rebranded museum convinced Big Oil to help fund one of the new exhibits, to be called "1867." The million-dollar donation from the Canadian Association of Petroleum Producers is the largest ever to the museum, which is not far from the newly rebranded Sir John A. Macdonald Parkway. The scenic route running along the Ottawa River was renamed in 2013 after the Canada's first PM, a Conservative.

The Conservatives repeatedly used "time allocation" in 2013 to shut down debate in the House of Commons and force an early vote on legislation.

The same instinct was at work when the PMO came up with the idea of an enemies list for new ministers in the summer cabinet shuffle, including bureaucrats "to avoid" and "friend and enemy stakeholders."

The Parliamentary Budget Office wasn't named as an enemy, but Harper neutered that office in 2013. After waiting months to name a successor to the fiercely independent and effective Kevin Page, the office is now a shadow of its former self, reduced to filing access to information requests to get answers from the government to simple questions.

Between November 2012 and November 2013, all of the net new jobs created in Canada were in the lowest paid and most insecure occupational group: sales and service jobs.

There were just 172,400 new jobs created over this period. But sales and service employment rose by 191,700. These jobs pay an average of just $16.50 per hour, giving the lie to the Harper government's claim that our economy is doing just fine.

Tell that to all the manufacturing workers, with good middle-class wages, who learned in 2013 that their plant would be shutting down.

The social conservatives in the Conservative Party spent 2013 making sure abortion was back on the Parliamentary agenda.

Conservative MP Mark Warawa got things started with his push to condemn sex-selection abortion, and caucus colleagues Stephen Woodworth and Maurice Vellacott picked up the ball and ran with it.

Their two motions to reopen the abortion debate aren't exactly the same, but the Conservative MPs want a special committee of the House of Commons in 2014 to study the "legal protections" accorded to "children before birth."

So much for Harper's promise not to reopen the abortion debate.

Harper used to loath these massive bills because, in his words from 1994, they aren't "in the interest of democracy." Now, he's a big fan of them, burying bad ideas in omnibus budget legislation so they don't get debated.

The first in 2013 was 128 pages long. The second ran 322 pages, and included amendments to 50 laws, many that had nothing to do with budget implementation.

The year began with the historic Idle No More movement and a meeting between chiefs and Harper. Since then, there have been no signs of a new nation-to-nation relationship.

Instead, we've seen the opposite from the Conservatives: refusing to call a public inquiry into 582 missing and murdered aboriginal women, proposing a First Nations education bill that's been panned and pressing ahead with the expansion of the tar sands despite treaty rights and objections of First Nations.

The Conservatives continued their war on workers with dozens of amendments to weaken the Canada Labour Code and the Public Service Labour Relations Act. That's not all.

The government had the back of two backbenchers who are promoting bills (C-377 and C-525) that have one goal: attack unions so they can't fight for fair wages.

Soldiers and veterans spent a good chunk of the year raising concerns about inadequate support and shabby treatment by the Canadian military after returning from combat. Then Conservatives announced plans to close nine Veterans Affairs offices throughout the country.

Before year's end, four Afghan veterans took their own lives in the span of a few days, shining the light on how we're failing our men and women in uniform.

It's the government's job to keep people safe. The Conservatives record on rail safety shows they've failed that test.

The deadly runaway train disaster in July carrying crude oil in Lac-M&eacutegantic was a brutal reminder of problems with the system. A few months later, the auditor general's report on rail safety showed longstanding systemic problems with the oversight of Canada's rail system.

Environment Minister Leona Aglukkaq is the fifth minister in that portfolio in eight years to promise regulations aimed at curbing climate-warming emissions. 2013 was supposed to be the year, but nope. By year's end, Harper confirmed we'll have to wait a few more years.

Meanwhile, the Conservatives continued to approve the expansion of the tar sands without any plan to reduce climate pollution. This will add to the 250 million litres of liquid toxic waste currently created by the tar sands every day.

The Conservatives continued to stonewall an Elections Canada's voter-suppression investigation, hampered by a weak law that prevents the agency from compelling testimony. This obstructionist approach means only one person was charged in 2013: a low-level party guy named Michael Sona, who maintains his innocence and says he's being scapegoated by the party.

Harper rode into power with a promise to clean up corruption after the Liberal sponsorship scandal. That narrative crumbled in 2013 when the Prime Minister's Office became the subject of a police investigation after Harper's closest advisors meddled in an internal spending probe in the Senate.