Santa Claus is magic. How else could he live at the North Pole, above 4000 metres of frigid water? 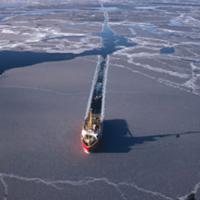 An Arctic for Everyone

The North Pole, indeed, is located near the middle of the Arctic Ocean. Covered by drifting sea-ice, pummeled by high winds, it receives no sunlight for several months a year and is regularly exposed to temperatures of minus 50 degrees.

Stephen Harper may not be magic, but he knows that for many Canadians, the North Pole remains an idyllic location -- complete with Santa's workshop, elves, reindeer, and a candy cane marker.

This explain why, earlier this month, the prime minister insisted that oceanographers withhold the Arctic Ocean portion of Canada's submission to the UN Commission on the Limits of the Continental Shelf. Harper ordered the collection of more data, followed by an eventual submission that includes the North Pole.

There is just one problem: international law cannot secure this symbolic location for Canada.

This is because a maritime boundary will be required between Canada and Denmark's seabed rights in the central Arctic Ocean.

The principle of equidistance is the standard method used to delimit maritime boundaries outwards from adjacent countries. In 2012, Canada and Denmark agreed on an equidistance line for the first 200 nautical miles north of Ellesmere Island and Greenland, to the limits of their "exclusive economic zones."

Both Canada and Denmark likely have rights beyond 200 nautical miles, on the "extended continental shelf." But again, an equidistance line would be used to delimit their respective zones. And like it or not, the North Pole is located well off to the Danish side.

To obtain international recognition of rights beyond 200 nautical miles, countries must scientifically demonstrate that the seabed in any given area is a "natural prolongation" of their landmass. These rights are generally limited to 350 nautical miles from shore, unless a "submarine elevation" extends them farther.

Canadian and Danish scientists believe that the Lomonosov Ridge, an underwater mountain range that crosses the Arctic Ocean, is a submarine elevation that constitutes a natural prolongation of the North American landmass (and specifically Ellesmere Island and Greenland). On the other side of the Arctic Ocean, Russian scientists believe the Lomonosov Ridge is a natural prolongation of the Asian landmass.

It is possible for all these scientists to be right. The Lomonosov Ridge may well be a "double-sided continental margin," that is, a natural prolongation of both North America and Asia. If so, Russia, Canada and Denmark would -- on the basis of the science -- all have legitimate claims.

However, even if this were the case, the Commission does not have the authority to draw a boundary separating Canadian and Danish rights on one side, and Russian rights on the other. The Commission is a body of scientists, not a court.

Any overlapping claims to the Lomonosov Ridge would have to be resolved through negotiation or adjudication. Once again, the principle of equidistance would likely be used -- this time to draw a line across the ridge, an equal distance from the coasts of Ellesmere Island and Greenland on one side, and the coast of Russia on the other. In this scenario, the current extent of Canada's seabed mapping would suffice.

And should the Commission determine that the Lomonosov Ridge is a natural prolongation of North America only, Canada and Denmark could at that point collect more data -- towards the Russian side of the Arctic Ocean -- and update their submissions accordingly. In other words, there is no need for Canada to spend more money on seabed mapping now.

These scientific and legal realities would have been explained to Stephen Harper before he requested a revised Canadian submission that includes the North Pole. But magic, rather than fact, dominates the public consciousness when it comes to this location.

Knowing this, would any prime minister put himself in the position of having to explain why an official map -- produced and published on his watch -- showed Canada not claiming the North Pole?