Of all the hypocrisies revealed by Stephen Harper, perhaps none are so morally offensive as his sudden, solemn respect for Nelson Mandela. We will never know how Harper would reconcile his past attitudes towards apartheid with his trip to South Africa to honour the iconic statesman at his memorial. 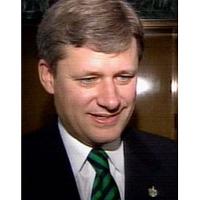 So What DID Harper Say?

In 1989 Harper was a member of the Northern Foundation (NF) about the same time that he became policy chief of the Reform Party. The exclusive mandate of the NF was to counter the serious efforts of the Canadian government of Brian Mulroney to pressure the South African government to release Nelson Mandela from prison and to end apartheid.

The membership of the NF read like a who's who of the far right in Canada. Many, if not all, of its members were also members of the Reform Party. In 1991 Harper told Trevor Harrison, who was researching his PhD on the Reform Party (later a book entitled Of Passionate Intensity): "I helped establish something called the Northern Foundation before it (much later) deteriorated into a kind of quasi-fascist organization. I was actually expelled from it. It's got stranger and stranger." Yet there was no doubt about what the organization stood for when Harper was still a member. And by his own account he didn't leave voluntarily.

Prime Minister Harper's communications aide gives a very different account now. In an email response to a version of this story published earlier today, he claimed Harper simply attended one meeting (about British market reforms) and that once he realized it was a pro-apartheid group he had nothing further to do with it.*

The NF's magazine was explicitly pro-apartheid (as well as anti-gay, and anti-French language rights). It provided free advertising to many right-wing groups including the pro-apartheid magazine The Phoenix and the Reform Party which apparently didn't object to being promoted by a gang of racists.

As I documented in my book Preston Manning and the Reform Party, the Reform Party's connection to, and harbouring of, pro-apartheid activists went right to the top. William Gairdner (a right-wing public speaker and immigration critic) was one of the party's favourite keynote speakers and regularly attacked Canada's policy on South Africa, leveling attacks on the "one party dictatorships of Black African countries."

Stan Waters, the Reform Party "senator" (he won an election for senator in Alberta) was the party's foreign affairs spokesman. He was openly supportive of white rule in South Africa: "South Africa should think twice before allowing majority rule because most black African countries live under tyranny."

As a result Waters received the financial backing for his senate campaign from Arthur Child, the president of Burns Foods and long time supporter of the South African white regime. Child is the only Canadian to have received the apartheid regime's medal of honour. Child was also a Reform member and on the board of the Canadian South African Society -- a front group supporting apartheid and funded principally by the South African embassy in Ottawa.

Harper was Manning's chief policy officer, a position that reflected considerable influence with Manning -- and his trust. Harper, Manning and Waters were the almost exclusive spokespersons for the party before it replaced the PC Party as dominant right-wing party in 1993.* Harper would have worked closely with Waters as the party's lead on foreign affairs. He would almost certainly have known Child and most of the other high profile pro-apartheid figures.

Most if not all of the high profile pro-apartheid activists and writers were active in the Reform Party because they felt the party was sympathetic to their cause. K.H.W. Hilborn, a professor at the University of Western Ontario was an outspoken critic of the African National Congress (ANC) and joined the party in the hopes of changing the government's "orientation towards the like of the ANC." He was also on the president's council of the National Citizens Coalition, the organization Harper joined early on and would head up when he temporarily left politics in 1997.

SFU economics professor Herb Grubel, a Reform Party MP, wrote two academic articles critical of sanctions against South Africa (here and here) and taught at the University of Capetown in 1984 and again in 1989, in violation of Commonwealth sanctions.* Ted Byfield, then publisher of the Alberta-based “Report” magazines (the virtual mouthpiece of the Reform Party), was in the same pro-apartheid camp.

Perhaps the most notorious Reformer working on behalf of the apartheid regime was Donovan Carter, a former TV broadcaster in Calgary. He worked directly with the South African embassy to set up pro-apartheid front groups across the country. He set up nine such groups and then hired operatives to infiltrate anti-apartheid groups. Carter worked closely with Stan Waters.

Clearly the key figures in Reform knew better than to openly promote the racist apartheid regime let alone take an official policy stand opposing the release of Nelson Mandela. Indeed Harper was often worried about the potential damage extremist groups could do to Reform's carefully nurtured image as a mainstream party. Yet from his initial membership in the Northern Foundation to his willingness to have some of the most vociferous defenders of apartheid South Africa as prominent members of the party, Harper demonstrated where his sympathies lay.

The rule was simple: so long as these pro-apartheid activists did not publicly embarrass the party, they were welcome as fellow travellers.

After Mandela's release from prison in 1990 and the subsequent end to apartheid, the question was moot in any case. Yet the issue did not go away entirely as some ten years later one of the party's most controversial and extreme right-wingers embarrassed the party. In 2001 Rob Anders, an MP from Harper's own Calgary home-base, refused the House of Commons unanimous consent to declare Nelson Mandela an honourary Canadian citizen. When the speaker asked for unanimous consent he shouted "No!" -- declaring that Mandela was a terrorist and a communist.

Even upon Mandela's death and amid an outpouring of adulation from every corner of the planet, Anders has refused to change his position. Harper had ample opportunity to indicate his disapproval of Anders when in the lead-up to the 2008 election local Calgary Conservatives made it clear they wanted him replaced as their candidate. Instead of accepting this democratic imperative, Harper fought for Anders, changing the membership rules to disqualify new members and spending hundreds of thousands of dollars fighting the dissidents all the way to the Supreme Court. Why would Harper expend party funds and his own political capital on such a marginal MP?

There are other key people in the present day Conservative Party with histories that include attacks on Nelson Mandela, including Harper's former chief of staff, Guy Giorno, one of the most powerful figures to occupy that position. When he attended St. Michael's College in the 1980s, he wrote for the right-wing Catholic Digest, attacking Mandela for espousing violence.

Of course all of this is now in the past and perhaps all these declared opponents to Nelson Mandela's cause have changed their minds. Maybe Stephen Harper really does admire Nelson Mandela -- but only as a statesman, never as a revolutionary warrior. And the consequences of this neo-con hostility to anti-colonialism in Africa seem to still be reflected in the Harper government's policies. In 2009, Harper closed the embassy in Malawi just five years after it was established by Paul Martin. The next year Harper shifted aid away from Africa to South America saying Canada wanted  "... to target more Canadian aid to countries in its own geographic backyard." He eliminated bilateral aid to eight African countries, over half the recipient African nations. The government was widely criticized for the move, even by the OECD which accused Canada of "...hurting development efforts in the world's poorest countries." Harper announced more cuts of $377 million in 2012 to twelve of the world's poorest nations, seven of them in Africa.

These actions dramatically reversed a decade or more of major Canadian commitments to Africa. And while the decision to slash African aid was couched in economic terms, much of the cancelled aid had actually been targeted at infrastructure to facilitate further investment. According to the Geopolitical Monitor the Canada Investment Fund for Africa was "dedicated to making private equity investments in businesses throughout Africa."*

Canada now has virtually no presence in Africa at a time when China and other countries are pouring billions in investment dollars into the continent.

On the face of it, Canada's deliberate exit from Africa seems irrational from any policy standpoint. Perhaps it is nostalgia for the 1800s when British colonialism was at its height.

According to Trevor Harrison, the pro-apartheid agitators on the late 1980s had "strong Anglo-Saxon nativist inclinations" who depicted "Canada as not only historically an Anglo-Saxon country but also part of a wider Anglo-Saxon culture that is in need of recognizing and re-establishing its heritage.... The notion of a 'common heritage' seems to encompass the white settler colonies of the former empire, including white South Africa."

The idea of Anglo-Saxon nativism does find expression in the Five Eyes intelligence alliance comprising the five English speaking developed nations. And media reports from South Africa during the memorial services for Mandela suggest Harper stuck with his own kind: "Mr. Harper, meanwhile, chatted with leaders from Australia, Britain and New Zealand at the memorial and in an earlier breakfast meeting."

I wonder if they were reminiscing about the Empire.