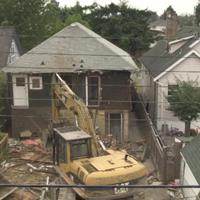 [Editor's note: On Dec. 4, Vancouver city council voted unanimously to pass the Heritage Action Plan, a 14-point list of recommendations aimed at preserving the city's stock of heritage buildings. Prior to the vote, Caroline Adderson, manager of the Vancouver Vanishes Facebook page, made a presentation to council about her thoughts on the plan. We publish a lightly edited version of that presentation below.]

My name is Caroline Adderson and I manage a community Facebook page called Vancouver Vanishes, on which I am archiving the demolition of our original character homes. The page currently has more than 2,500 members. The houses you see in the slideshow above are just a few that have appeared on the page. All of them were demolished in the last two years.

While I applaud Vancouver city staff and council for the Heritage Action Plan -- it contains some desperately-needed measures to protect heritage buildings -- unfortunately, it offers no timely reprieve for our vanishing original housing stock.

Where I live, on the city's west side, pretty much every house that goes on the market is purchased for the lot regardless of the condition of the house, which is generally good to superb. A few aren't, but these are classic fixer-uppers whose last owner was usually an elder who passed away or moved to a care facility.

Remember that older houses like these were once the type that young or lower income families could afford, improve, put a secondary mortgage helper suite in and later trade up, leaving a better house behind, one that honoured the lives and stories of all its previous inhabitants.

Jane Jacobs wrote, "Cities need old buildings so badly it is probably impossible for vigorous streets and districts to grow without them. By old I mean not museum-piece old buildings, not old buildings in an excellent and expensive state of rehabilitation -- but… a good lot of plain, ordinary low-value buildings, including some run-down buildings."

But these days all the houses are snapped up by developers -- the ones that need TLC, and the newly renovated, updated, and seismically upgraded. It makes no difference. They almost all face the same fate.

Daily ads like this one come through my door: "Do you own a [sic] Older Bungalow or Character Home? Have you thought of selling? WE HAVE CASH BUYERS!"

The houses are put up for sale, but the people who want to live in them are rarely able to out-bid developers who offer more money with no conditions attached. The developer purchases a house built with the kind of craftsmanship that barely exists today, using natural materials (including first growth wood). It stands empty, sometimes for years, then is demolished, sending tonnes of waste to the landfill, plus concrete, and in many cases its beautiful garden, too.

In its place a new, much larger house is built using synthetic materials shipped from overseas factories (note the enormous carbon footprint of these new builds). The new house stands empty for several more years until someone with $4 million comes along and buys it, at which point it continues to stand empty, possibly in the hope that its value will further increase. There are six such houses on my block.

Not green, not affordable, not even an increase in density. An irreplaceable loss of history, character and narrative. The Vancouver Heritage Foundation survey you cite states that 88 per cent of Vancouverites want less demolition in their neighbourhoods. This is what they're talking about.

City with soul, not a commodity

The main tool proposed in the Heritage Action Plan to protect our vulnerable original house stock is Action #6: zoning changes. Others will speak specifically on zoning. I'd like to respond to the timeline proposed and the vagueness of your commitment.

Action #6 is a "medium to long-term action." In late 2014 or early 2015 -- a year or more from now -- staff will "identify precincts or areas where heritage resources (and likely as a consequence, older character buildings and landscaping) are concentrated."

First, why "likely"? "Likely" means you have made no commitment at all. Second, what do you mean by "where heritage resources… are concentrated"? As of the end of October this year, 704 homes were demolished in this city. At this rate of 70 houses demolished per month, by the end of the year we will have sent around 850 to the Delta DLC landfill, which is currently comprised of 74 per cent residential demolition waste.

Delay action for a year, and we will be down another 850, by which point city staff may be hard pressed to find a "concentration" of character homes. I'm not exaggerating. The street next to mine has one original house on the south side. The next street has no remaining original houses on that side.

Should you amend this weak wording -- removing that word "likely" -- and actually pledge to preserve character neighbourhoods, delaying it a year will create an open season by developers anticipating restrictions on their lucrative business.

As you cite yourself, 96.6 per cent of Vancouverites believe that heritage buildings contribute to our sense of place. Their presence creates the vigorous, growing communities Jane Jacobs wrote about, and the livable, green, affordable city you claim to stand for. A city with a soul, not a commodity.

I thank you for this first step. But if you are sincere about preserving heritage, make appropriate rezoning of our character neighbourhoods a Quick Action, not a mere "likely" mid-to-long term action.