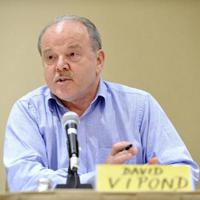 Gov't Mum on How Union Raises Will Be Paid

You can't turn on your television or radio or read a newspaper regularly without discovering some nefarious spending by government uncovered by the Canadian Taxpayers Federation.

Its B.C. director, Jordan Bateman, is a regular fixture in the media, denouncing taxes and public sector spending.

But who watches the watchdog, making sure the organization dedicated to "lower taxes, less waste and accountable government" is equally accountable to the public it seeks to influence?

Apparently, almost no one.

While the Canadian Taxpayers Federation, or CTF, boasts that it speaks for 84,000 supporters, it has just five -- count 'em, five -- actual members who decide its policies.

And the CTF does not hold an open annual general meeting, policy conferences, or any other membership gatherings that one might expect from a group that's constantly in the news demanding transparency from others.

Those five members form a board of directors who determine its budget, strategic plan and communications.

Donor names are secret, staff salaries are not posted by name, and while the CTF strongly denies being corporately funded and insists that 94 per cent of their donations are less than $1,000, there is no way to determine if that's true.

CEO Troy Lanigan defends CTF's structure however, saying in an interview that "very, very seldom" do they get requests for open meetings from supporters, who last year gave the federal not-for-profit corporation almost $4 million.

"It's ultimately accountable to funders. Donations are voluntary. People choose to be on our list; they drop off all the time," Lanigan said Friday from Victoria.

'We have a philosophical bent'

It's clear the Canadian Taxpayers Federation is also fundamentally right-wing in its politics.

The current five directors who are the CTF's only members include John Mortimer, president of LabourWatch -- a group that promotes union decertification -- and a past Canadian Alliance candidate.

Erin Chutter [formerly Airton], a mining executive who has worked for the federal Conservatives and BC Liberals, and an ex-24 Hours Vancouver columnist, was a director until April 2013.

There don't appear to be any current or former staff or directors remotely connected to the New Democrats or unions.

Lanigan said it's no secret the Canadian Taxpayers Federation is right-wing.

"We have a philosophical bent. I don't like being called a small-c conservative -- I prefer libertarian," Lanigan said.

"We obviously agree with the Conservatives on some issues, but not all," he added, pointing to a current campaign roasting now ex-Conservative Senator Mike Duffy over his expenses.

He insisted that CTF staff drop political party memberships and donations when they join, but admitted: "I cringe when our people go run in politics [afterwards]. But if people look at it objectively, we also go after conservative politicians."

Lanigan pointed out the CTF has also supported many New Democrat initiatives to improve government accountability, such as B.C.'s pioneering Freedom Of Information laws in the 1990s, pension and tax reforms made by the Saskatchewan NDP, and federal NDP leader Tom Mulcair's private member's bill to make the Parliamentary Budget Officer fully independent.

But even a cursory look at the CTF website shows most of its campaigns target taxes, government spending, debt and public sector union wages and benefits -- all with a conservative/libertarian approach.

"A lot of our debates are with unions in the public sector. They are effective on issues and we clash with them," Lanigan said.

Lanigan pointed to the Council of Canadians and the Canadian Centre for Policy Alternatives (CCPA) as counterparts on the political left that are doing the same kind of advocacy work.

But the Council of Canadians promotes individual memberships and has an annual general membership meeting in October, plus dozens of local chapters that meet regularly. It reports raising $4.5 million last year, but rejects either corporate or government funding while accepting union contributions.

Klein disputed Lanigan's terming the CCPA a "counterpart" of the CTF.

"We're first and foremost a research institute, not a campaign and lobby organization," Klein said Monday, noting that any research funded by donors is disclosed.

Back at the Canadian Taxpayers Federation, even its opposition to taxes is selective.

"The HST is not going away. It doesn't matter how many petitions there are, or how outraged people are -- and they are really outraged about it -- the government is not going to back down," Bader said in 2010.

In 2009, Bader actually praised the HST: "In theory, it's a good thing. In the short term it's bad for families, but over the long run it should help with economic growth and increase incentives to work and invest in the province."

Fortunately the CTF didn't discourage over 700,000 voters from signing the Citizens Initiative petition that forced the vote that killed the HST.

Lanigan admitted his organization's position on the tax split members in B.C.

But when the Nova Scotia NDP government announced an HST increase, the CTF opposed it and cited the hike as one of its main reasons for opening an Atlantic office in Halifax.

It all makes one wonder how the Canadian Taxpayers Federation can roast politicians in public for lack of transparency with a straight face while keeping its own decision-making and accountability very private.

"We're not spending taxpayer dollars, and donors have a choice to give us money or not," Lanigan said.

And asked who is the watchdog on the CTF itself, Lanigan replied: "People like yourself, the media, some governments who fire back."

A close look at the organization's structure certainly indicates it's worth watching.