"Last fall we felt it very important to sit down with the health authorities and go through the list of things that were allowed to be charged as extras so that there would be consistency across the province." -- B.C. Health Minister Terry Lake, July 23, 2013 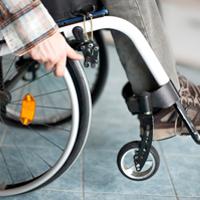 BC Liberals' Wheelchair Tax: What's Next?

Why is the Fraser Health Authority the only one in B.C. charging seniors in residential care an outrageous $300 annual "maintenance fee" just to use a donated wheelchair?

What happened to Health Minister Terry Lake's vaunted "consistency across the province" when Vancouver Coastal said there was no way it would implement the same fee?

Why did the Ministry of Health tell Fraser Health to charge the wheelchair fee and then not admit it until a freedom of information request proved it in July?

Why did Vancouver Coastal and the Interior Health Authority both back off on their own plans to impose a wheelchair fee and say the ministry and authorities are reviewing the situation?

And the biggest question: will Minister Lake end this offensive fiasco and order health authorities to stop any wheelchair maintenance fees?

The obvious answer that explains this mess is that the BC Liberal government is so desperate to balance the budget that it ordered health authorities to pick the disabled seniors' pockets.

And it's also clear that the province enabled the wheelchair maintenance fee to be imposed back in 2010 -- but until encouraged by the health ministry, no authority has been heartless enough to charge it.

Minister Lake says there is a "hardship provision" so no one who can't afford to pay the fee will have to.

Yeah, right. Let's be clear: most of these seniors already give up 80 per cent of their after-tax income to be in residential care and have only a $200 monthly comfort fund for all incidentals like shampoo. That's where the extra $25 a month would come from, and it would be a hardship for all of them.

The solution is equally clear: Minister Lake should stop trying to squeeze money out of seniors who hardly have any, but need a wheelchair in their remaining days.

But will he? The reality that the Ministry of Health asked Fraser Health to impose the fee, as outlined in an FOI request response obtained by journalist Bob Mackin:

"Subsequent to that submission, the MOH [Ministry of Health] requested FH to implement wheelchair maintenance fees to align with a similar proposal made by [Vancouver Coastal Health]. This request was based on a desire to have similar practices in all Health Authorities and to align with the practices in [Community Care and Assisted Living Act] facilities."

A. Dix: "When this wheelchair tax was announced -- and I guess the minister may be arguing it's not a medical or health care need -- the government blamed the health authorities.

"In fact, we know that the very briefing note says that residents were to be informed by April 1. We know that this did not happen. Conveniently for the government, no one knew about the tax until after the election.

"Fraser Health said that the decision to impose the wheelchair tax -- in the document -- was made after discussions that began in late 2012, presumably after Fraser Health got its marching orders.

"Can the minister tell this House when the decision was finalized, and can he tell the House -- a very simple question: did the government order the other health authorities to do the same thing?

Hon. T. Lake: "This is a chargeable fee that is allowed under the regulations in British Columbia. There was a patchwork of approaches across the province.

Well, in just days every senior in the Fraser Health Authority will be paying the $300 a year wheelchair maintenance fee, while seniors in other regions will not.

Do you find this whole fee imposition repulsive?

Join hundreds of other people who oppose the fee on my Facebook group Wheelchairs for BC Seniors and send the government a message.