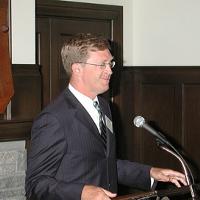 What price, justice? In Canada, if you're poor, you get legal aid. If you're rich, you hire Clayton Ruby. But for a growing number of middle class Canadians, lawyers have become unaffordable. The result is that court cases that normally would take three days may take 10, as unrepresented litigants bog down the process. In other civil disputes, people simply may not exercise their rights at all -- justice denied before it's even pursued.

According to a newly-released summary report by the Canadian Bar Association, Canada now ranks ninth out of 12 countries when it comes to access to justice. The CBA proffers many solutions to this problem -- the most ambitious being a system of "legal care" akin to medicare, which would expand full legal coverage to those earning up to twice the poverty line by 2025 -- and wants to see "options for a viable national justice care system (to) have been fully developed and considered" by 2030.

Fans of small government are likely choking on their coffee by now. They needn't worry. This idea is, in legal parlance, dead ab initio. It matters little that, according to the CBA report, "over three years, about 45 per cent of Canadians will experience a… 'justiciable problem'" -- which means almost everyone will need an attorney at some point in their lives. Any new entitlement program which would benefit lawyers would be an almost impossible sell -- and strange to contemplate when the profession is running ads trying to counter the public's perception of lawyers as vulpine bottom feeders.

Then there's the cost. While the CBA cites polls showing overwhelming support for legal aid (91 per cent to 96 per cent), full-scale legal care would be another matter. Even the left would have a hard time promoting such a concept, especially when it can't even get universal daycare off the ground. (Shall we spend scarce public resources on attorneys or people who care for little children? Hmm... let's see how the focus group feels about that.)

As for the centre-right, despite its love affair with the middle class, such a policy would open up a Pandora's box of potential spending which could jeopardize our ability to balance the books. That's not to mention the possibility for abuse and skyrocketing costs. Universal health care already encourages Canadians to see the doctor for every sniffle; would we want universal legal care to encourage them to sue each other too?

What about legal insurance?

Nevertheless, our justice system faces a very real problem: increasing costs, decreasing access and unrepresented litigants clogging the courts. If not legal care, then what? As with health care, a good part of the answer lies in the private sector -- notably in making full-scale private insurance available for all manner of legal services, to take the pressure off the public purse while making justice accessible for the middle class.

The CBA devotes two pages of its report to this idea, known as Legal Expense Insurance (LEI). Of the solutions proposed, it's the most likely to succeed, politically and practically. LEI covers private legal costs much as health insurance covers private medical costs. The CBA would like to see 75 per cent of middle income Canadians hold such policies by the year 2030. The policies are common in Europe where, according to former Ontario attorney general Marion Boyd, "people would no more go without legal insurance than go without car insurance."

LEI also is in vogue in Quebec. For years, the Quebec Bar has promoted such insurance, which their website claims can be had for $4 a month. According to Protegez-Vous magazine, 250,000 Quebec households had legal expense insurance in 2011.

LEI is not a panacea, as it may not cover the full cost of a lawsuit, nor cover family law disputes. But it would go a long way to bridging the gap for middle class litigants in a variety of civil cases. To increase coverage at the bottom end of the income scale, governments likely will have to boost funding for existing legal aid.

By ensuring that the most vulnerable continue to have legal services, while encouraging and enabling middle-income Canadians to insure themselves and their families, politicians would be harnessing both the public and private sectors to see that justice is served.