"So the question is, if [Cory] Monteith were visiting virtually any other city in Canada, would he have been able to find heroin? Would he have died? I think the likelihood is much lower." -- Licia Corbella, Calgary Herald, July 21, 2013 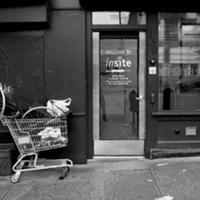 Corbella apparently lives in a surreal dream world where heroin is only found in Vancouver's Downtown Eastside and even if you want to score smack, you can't -- unless you hang around outside the Insite safe injection site and ask drug users to find you a dealer.

Forget about the fact that every major Canadian and American city have far too many heroin overdose deaths annually, including Calgary -- where a record 16 kilograms of heroin was seized this April -- that's enough for 800,000 doses.

Or that Monteith, who openly and bravely struggled with his addiction issues while trying to help others, died from a fatal combination of alcohol and heroin.

Corbella has rightly been taken to task by many in the media for her lack of research and reliance on hearsay information, leading some to call her opinions on Vancouver ignorant.

But I'll go further -- it is willful ignorance on Corbella's part to promote her anti-harm reduction position.

You can tell that from her statement Friday to Simi Sara of CKNW radio on what the point of her column was.

"The point was for Vancouver to maybe rethink the whole harm reduction philosophy on the Downtown Eastside. And I don't just mean Insite, I meant the idea of police looking the other way as people openly sell drugs and inject drugs on the street. It's disgusting and it's ruining many lives," Corbella said.

Corbella admitted she had never tried buying heroin in any city and doesn't quote a single research source, but still argued that the drug was easier to procure in Vancouver than anywhere else.

There's no question hard drug use is terribly damaging and potentially fatal. But Corbella deliberately refuses to face the facts, which are easily obtained.

"There wasn't much that was factually correct in her column or in her comments, so it's unfortunate," Daly told Steve Darling on CKNW radio Sunday.

"All the data on the effectiveness of Insite contradicts what was said by this particular columnist," Daly said. "We know that it actually helps people get into addiction treatment.

"Over the last 15 years, we've increased the number of people in drug treatment five times... overdose deaths have gone down, particularly in the vicinity around Insite, we know that there are far fewer people injecting drugs in Vancouver than there were when Insite started," Daly said.

"We're also seeing far lower rates of HIV in injection drug users and far lower rates of hepatitis C," Daly said. "Harm reduction is there to prevent people from dying of drug overdoses and prevent them from getting potentially fatal infections while we try and engage them in treatment.

"And it's been unusually successful in doing that. There are many more people in treatment since before we opened Insite," she said.

Insite is a leader

Daly notes that the Fraser Valley -- with no safe injection site and limited harm reduction -- had about 80 overdose deaths versus about 60 in Metro Vancouver, despite the huge different in population, in 2009, the last year with full statistics.

And cities south of our border can be far worse. Baltimore, Maryland reported 126 heroin overdose deaths in 2012 and 378 across the state while Wisconsin reported 199.

Toronto has a serious overdose deaths problem too, which is why its chief medical officer is calling for a safe injection site pilot project there.

"The reality is that injection drug use is already happening in neighbourhoods across Toronto, in apartments, in alleyways, in washrooms," Dr. David McKeown said in July.

"Society has made significant advances in the past decade in addressing the denial that surrounds mental health. We need the same honesty and openness regarding injection drug use."

Daly says that some of the world's most respected health publications like the New England Journal of Medicine, the British Medical Journal, the Canadian Medical Association Journal and The Lancet have all done the research and found very positive results.

But peer-reviewed medical journals weren't consulted by Corbella, who instead relied on overhearing a single conversation in a restaurant "several years ago" where some young people in Calgary claimed they were planning on going to Insite in Vancouver to try heroin.

When it comes to whose opinion is worth listening to, I'll take Vancouver's medical health officer and esteemed research journals over a nosy Calgary columnist using unsubstantiated overheard gossip to draw sweeping conclusions about Vancouver and harm reduction.