In the wake of this weekend's tragedy in Lac-Mégantic, where a runaway train filled with crude oil quite literally annihilated the historic village's downtown, with at least 50 of the town's residents (13 of whom have been confirmed dead, the rest, missing), the big question being asked on Twitter and by the nation's top journalists wasn't whether cuts to railway regulation and safety inspections had contributed to the accident, but whether official Opposition leader Thomas Mulcair was a crass and vile man for posing the question. 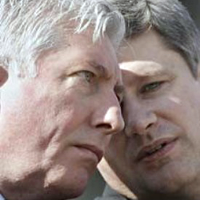 Mulcair drew fire for stating two points of fact. That rail transport of oil is becoming "more and more" common (an understatement if anything, as such shipments have increased by 28,000 per cent since 2009), and that the Harper government "is cutting transport safety in Canada." This latter statement based on the fact that the Harper government has cut the safety budget for railroads from $36.9 million in 2012-13 to $33.8 million in the 2013-14 estimate, a drop of $3.1 million.

Mulcair couched his remarks in repeated expressions of compassion for those affected, and insisted that questions needed to be answered, for no one as much as for those same victims and their families.

This was enough for many members of the national media to abandon any question of whether Harper or his cuts could have contributed to the accident, and spend the day waxing eloquent on the inappropriate, crass and politically motivated nature of the NDP leader's comments.

Behind the bickering over the latest round of cuts to railroad regulation and safety inspections, however, is a broader issue. In 1999 the Liberal government of the day deregulated Canada's railroads by amending the Railway Safety Act to implement Safety Management Systems (SMS). This change eliminated the role of Transport Canada in the oversight of railroads, and passed the onus onto the individual companies to regulate themselves.

A 2007 report from the Canada Safety Council raised the alarm about the dangers of this approach and called Canada's railway network a disaster waiting to happen, arguing that the government should return oversight to Transport Canada.

Deregulation "allows rail companies to regulate themselves, removing the federal government's ability to protect Canadians and their environment, and allowing the industry to hide critical safety information from the public."

The report found major safety issues and frequent derailments, and even spills of oil and other hazardous substances, were common. One rail company, believed to be CN, was singled out for having "a truly dismal safety record."

The report's dire warning that the status quo would lead to disaster seems eerily prescient in Lac-Mégantic, and as opposition parties try to hang blame for the disaster on a cut of $3.1 million, the better question remains unasked: is deregulation, and its attendant lack of oversight, the true culprit?

This report is far from a lone voice in the wilderness; as a release by environmental advocacy group Greenpeace points out, there have been many warnings, especially when it comes to transporting oil.

"The Federal government's own safety officials told them nine years ago that 80 per cent of the rail tanker fleet in Canada is unsafe for carrying oil. The general type of rail car used to move oil in Canada was flagged by the U.S. National Transportation Safety Board (NTSB) as having a "high incidence of tank failures during accidents" and by the Canadian Transportation Safety Board as prone "to release product at derailment and impact".

In fact, as recently as June of this year, in an article titled "Tories take wait-and-see approach as TSB probe calls for train safety overhaul," the Globe and Mail reported on a Transportation Safety Board report which called for stricter regulation and more safety measures in the wake of a Via Rail derailment which killed three and injured dozens.

The Globe quoted Wendy Tadros, chair of the safety board, as saying: "In robust safety systems, you're supposed to have multiple lines of defences. The signal system is the first line of defence. What we're saying is that there needs to be another defence in there, and it needs to be something beyond rules and procedures. We need something physical, an automatic fail-safe way of bringing that train to a stop.

"[The rail industry is trying to maintain] the status quo, [but] we need to fix this or it is going to happen again."

Prior to, during, and after the process of deregulating railroads, there were strident warnings issued by the most credible and well-positioned experts and organizations in Canada. Their dire predictions fell on deaf ears, and yet not a single story in the mainstream media has made the link between the deregulation of the rail industry and its inevitable consequences.

Instead, those who dare make the commonsensical connection between deregulation, cuts to regulation and inspection, and an increased frequency of accidents, are pilloried for politicizing a tragedy.

I wonder, if now is not the time to discuss the reasons why this disaster occurred, when is?