"Dog-whistle politics. It means putting out a message that, like a high-pitched dog-whistle, is only fully audible to those at whom it is directly aimed." -- The Economist, March 2005 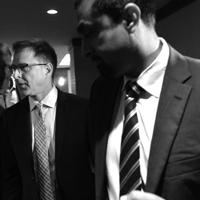 Surveying the Rubble after BC's Election

The BC Liberal Party's winning election campaign successfully blew a dog-whistle signal to its many straying voters, calling them home just in time to defeat the BC NDP.

The dog-whistle call is a simple one that works time and again for the so-called "free enterprise" coalition that usually governs British Columbia: "jobs and the economy."

"The socialist hordes are at the gates in British Columbia," Social Credit Premier W.A.C. Bennett would warn every election for two decades, using the original dog-whistle that proved remarkably successful in keeping the BC NDP out of power till 1972.

The current BC NDP has run three consecutive campaigns under two different leaders and two different campaign managers that attempted to mute that dog-whistle by appearing as moderate and centrist as possible for a social democratic party.

But neither Adrian Dix in 2013 nor ex-leader Carole James in 2005 and 2009 could stop voters from responding to that instinctual, if irrational, BC Liberal call.

Christy Clark had lost the dog-whistle for her two years as premier, because Dix quickly built a substantial lead in the polls while Clark's constant campaign mode that led to continual governing errors.

It was only when Clark took her own tarnished name back out of the BC Liberal Party's own logo, dropped her ineffectual "Families First" and "B.C. Starts Here" slogans, and instead focused on the campaign's "Strong Economy. Secure Tomorrow." theme -- and the alleged NDP threat to it -- that centre-right leaning voters returned.

Whistling in the fact-free dark

Never mind that the BC Liberals had increased debt, lost jobs and were constantly facing political scandals -- listen to the whistle! Fear the NDP! Ignore the BC Liberal record! Forget the media reporting facts!

Meanwhile, the BC NDP was oblivious to the constant dog-whistling during their frontrunner, play it safe campaign.

Without polling in key swing ridings -- while the BC Liberals were reportedly canvassing 25 seats every day -- and with province-wide public polling showing a substantial if expected narrowing of their lead, the BC NDP was flying blind.

And amazingly, the party was conducting riding polling earlier this year but dropped that during the election for reasons not yet explained by campaign manager Brian Topp.

Public polling appears to have led their campaign team and pundits alike to miss the kind of signs that would have been more foreboding in the days when polls were banned before 1982 during elections.

I ignored some of those signs too, like when my butcher told me he was worried about an NDP government's effect on the economy; some small crowds at Dix appearances; the email warning to me from an ex-NDP MLA that the positive-only campaign wasn't exciting the party base and the BC Liberals were being let off the hook on their 12-year record of failures because the NDP wasn't running any negative ads.

But like others, I mistakenly put my faith in professional polls showing a significant NDP lead, even the day before the election -- and polls truly are the coin of the realm in politics.

This election proved that the good old right-wing dog-whistle is far more reliable than every pollster.

And so far, in campaign after campaign, the BC NDP hasn't found its own dog-whistle to rally enough voters to win.

Clarification: I should have noted last week that vote counts for 2013 were preliminary and did not include what is now a record 180,000 absentee ballots; Elections BC reports they will be tallied this week, increasing turnout to about 56 per cent and potentially changing the outcome in some closely-fought ridings.

And the NDP's 824,544 votes in 1986 that I cited included some dual-member ridings where voters got two choices, meaning the likely NDP high point of support was in 1983, when 46 per cent of voters backed Dave Barrett in a powerful but losing campaign to Social Credit Premier Bill Bennett.