Peter MacKay is no stranger to maritime pubs. He could probably recite the words of Stan Rogers' Barrett's Privateers while drunk and standing on his head. But does Canada's defence minister realize that he's fast becoming the 21st-century version of Elcid Barrett, who led a group of blindly ambitious men on a dangerous folly? 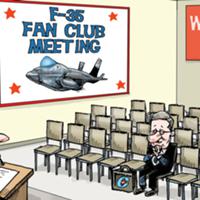 The problem concerns the Royal Canadian Navy's long-promised Arctic/Offshore Patrol Ships ("A/OPS"), which are due to be built in Halifax and based there and in Esquimalt, B.C. The A/OPS are the new "Antelope," Barrett's 18th-century sloop that the song describes as a "sickening sight" with "a list to the port and her sails in rags."

It took the Antelope "two whole days" to catch an American ship that was "broad and fat and loose in the stays" and "lay low down with gold." The A/OPS, with a top speed of just 17 knots, will have even less chance of catching today's drug and people smugglers.

Part of the problem is that the A/OPS will have ice-strengthened hulls, which are heavier and therefore slower than those of purpose-built patrol vessels. Originally, this handicap was to be ameliorated by building the A/OPS as "double-acting" ships -- with a bow designed for high-speed sailing in open water, a stern designed for breaking ice, and "Azipod" propeller units that can rotate 180 degrees.

But for cost-saving reasons, this proven technology was removed from the plan.

The "ice-strengthened" single-acting hulls will also be unstable; so much so that the A/OPS will not be able to launch or retrieve their helicopters in conditions above Sea State 3, which involves waves between just 0.5 and 1.25 metres. By comparison, Canada's existing Halifax-class frigates can launch and recover helicopters in Sea State 6 with waves between four and six metres.

Stability is only partially a question of size: Australia's Armidale-class patrol ships are just 56 metres long but can operate comfortably in four metre waves and survive cyclonic conditions.

The 18th-century Antelope also suffered from being under-armed, and had to come within two cables of the American ship to use its four-pound cannon. And thus, "with one fat ball the Yank stove us in."

Originally, the A/OPS were supposed to be armed with a 40 mm "primary gun" as well as 12.7 mm guns for "self protection." But for cost-saving reasons, the A/OPS will now carry just one 25 mm cannon. By comparison, the American Sentinel-class is fitted with a 25 mm high-speed chain-fed cannon as well as four .50 calibre machines guns. The Russian Svetlyak-class is armed with a 76.2 mm AK-176M cannon and a six-barrel 30 mm AK-630 gun.

Then there is the issue of cost. The choice of a new and unproven design has resulted in a remarkably expensive procurement. The original, long-standing construction budget for the A/OPS is $3.1 billion for just six to eight vessels, with an additional $4.3 billion for operations and maintenance over a projected 25-year lifespan.

By comparison, the United States is spending just half that amount -- $1.5 billion -- for up to 34 of the Sentinel-class Fast Response Cutters. Australia obtained its Armidale-class fleet for $553 million, including the design and construction of 12 ships and 15 years of support and maintenance.

Financial constraints will bite even deeper as the Navy struggles to complete the A/OPS within a procurement budget that was set in 2007 and is continuously being eroded by inflation.

This problem is illustrated by the audit of another procurement -- the Navy's Joint Supply Ships -- that was carried out by the Department of National Defence's own "Chief Review Services" in 2011. It found that inflation had improperly been assessed at 2.7 per cent instead of the 3.5 to 5 per cent inflation factor "acknowledged to be prevalent in the shipbuilding industry." The longer the A/OPS procurement drags on, the less capable the resulting vessels will be.

The litany of mistakes and compromises has serious consequences. At stake is not just the $7.4 billion being spent on the A/OPS and their maintenance, but also the Navy's ability to operate effectively. It is time to stop the A/OPS procurement, and quickly, before the actual construction contract is signed.

The Arctic role should be left to the Canadian Coast Guard, which already handles it well. If necessary, light guns could be installed on its icebreakers.

On the Pacific and Atlantic coasts, purpose-built high-speed offshore patrol ships should be provided to the Navy. And while the ships should be built in Canada, a proven design must be used.

From F-35 fighter jets to the replacements for Canada's ancient Sea King helicopters and Buffalo search-and-rescue planes, defence procurement in Canada has become a gong-show of mistakes. But providing equipment for the men and women of the Canadian Forces is no drinking game. It's time for Peter MacKay to find his feet.