A junior Conservative staffer on the 2011 federal campaign in the Guelph riding has been charged with attempting to prevent someone from voting, an offence under the Canada Elections Act. 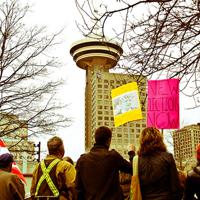 The staffer's name is Michael Sona.

He is alleged to have committed his offence by ordering automated -- or "robo" -- calls, which told carefully selected "non-Conservative" voters, falsely, that polling stations had been moved.

The robocalls purported to come from Elections Canada, also a falsehood; but not, curiously, against the law, as it now stands. One of the changes to the law the Chief Electoral Officer, Marc Mayrand, has proposed would make it a crime to impersonate an Elections Canada official.

One aspect of the current case that stands out is how much non-cooperation Elections Canada investigators have faced.

A number of key players -- including Sona, himself, and the Guelph Conservative campaign manager (who is now safely out of the country) -- have refused to speak with investigators. Another legislative change Mayrand is urging on the government would remedy that obstacle. It would give Elections Canada the authority to compel people who have potentially valuable information to answer investigators' questions.

When asked whether his package of proposed legislative changes would cost money, Mayrand pointed out that if the investigators now had the powers he proposes the current investigation would, in fact, be a lot less expensive.

As for Sona, he claims he did not, personally, have the resources necessary to commit the crime of which he is accused.

For one thing, he claims he did not have access to the National Conservative Party headquarters' voter database. To engineer a robocall that targeted identified non-Conservative voters one would need access to that database.

There is much speculation that Elections Canada is laying this single charge against Sona in the hope that it will encourage him to be a bit more forthcoming. The big question is, if he, Sona, did not have the capacity to carry out the Guelph robocall caper, who did?

Sona's lawyer broadly hinted that his client has much damaging information to share about the full extent of what happened in 2011. He dropped that hint when he said the only way to get at the full truth would be "a full, public inquiry." The clear implication is that the full scope of the "truth" spreads way beyond whatever his hapless client might have done.

We will definitely not be getting that inquiry from the Harper government.

For the time being, the closest we'll get to hearing, in public, from anyone involved in the 2011 campaign's putative voter suppression activities will be at Sona's trial, which is due to start on May 3.

As we wait for that, Elections Canada says it is continuing its investigation.

As well, Federal Court Judge Richard Mosley is still considering the suit brought by six Canadians who seek to have the 2011 election results in their ridings overturned because of the widespread alleged voter suppression tactics.

At the conclusion of that trial, late last year, Mosley said he would render his judgment as quickly as possible, but that it would inevitably take some time. More than three months have now elapsed since then.