"Twitter is a great place to tell the world what you're thinking before you've had a chance to think about it." -- Chris Pirillo, blogger 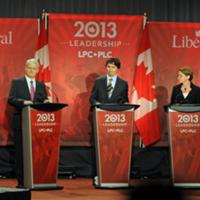 Canada is apparently doomed -- unless one of two things happen, depending on which Twitter feed you follow:

While the first option is extremely unlikely, it at least has a mathematical possibility of coming true.

The second option, however, would require more things to happen in precisely the right order with exactly perfect timing than the Big Bang Theory that created our universe.

But two of Canada's biggest social media groups, LeadNow.ca and Avaaz.org, are betting everything on the cosmology caper coming true.

For others, either one of those events happening in Canada in 2015 would be a sign of political apocalypse akin to the Mayan calendar's 2012 end of the world prediction, and equally unlikely.

Nonetheless, when the Twitterati become restless thinking that Harper will extend his Darth Vader rule by winning another election in 2015 -- they do what they do best: Tweet.

Avaaz.org and LeadNow.ca both have admirable campaigns that I endorse, such as fighting violence against women in India or opposing Conservative environmental cuts.

But they strained their credibility beyond the breaking point when they asked Canadians to join the Liberal Party of Canada to support Murray's windmill-tilting campaign for the leadership.

Leadnow.ca and Avaaz.org don't even seem bothered by the fact that Murray's own track record on the environment -- one of their top issues -- is simply awful.

Murray was once hatchet person for then-premier Gordon Campbell's BC Liberal government, serving as minister of water, air and land protection while clear cutting 25 per cent of the staff that actually protected wildlife.

Murray was also in charge when the BC Liberals ended the moratorium on salmon farm expansion and hunting grizzly bears and stopped issuing reports about who were the worst corporate polluters in the province. They even eliminated the name "environment ministry."

But her past apparently doesn't matter even to famous enviro endorsers like David Suzuki, because Murray now opposes the Enbridge Northern Gateway Pipeline -- and wants electoral cooperation.

You have to choose

As I have argued before, removing voters democratic right to choose between political parties through an electoral cooperation deal is simply wrong -- and what's more, won't work.

And while Tyee contributor Murray Dobbin endorses the lowest common denominator approach to Canadian politics, the reality is that those who want to depose Harper have a simple choice -- Mulcair or Trudeau, but not both.

Electoral cooperation can still happen if Canadians wish to support whichever party can most likely win against a Conservative in a "strategic voting" scenario. But neither the NDP opposition nor the third party Liberals will endorse it.

That approach is totally fair for groups like LeadNow.ca and Avaaz.org to advocate, inform and persuade -- but trying to remove voter choices through a party deal will never succeed.

And while their efforts have gained some media traction, the reality is that currently about 51,000 Canadians have signed LeadNow.ca's electoral cooperation petition online -- which represents less than half the number of voters in one average Ontario riding.

Unfortunately neither LeadNow.ca nor Avaaz.org are launching campaigns to restore democratic representation by population in Canada, where currently Prince Edward Island has ridings with just 30,000 voters and Saskatchewan and Nova Scotia average about 70,000 voters -- compared to six Greater Toronto-area ridings with 150,000 to 170,000 voters.

That means a vote in PEI is worth five times more than in Toronto!

What does Trudeau stand for?

Marc Garneau -- an actual Canadian hero who once challenged Trudeau to debate the real issues facing our country instead of making vague pronouncements -- has dropped out and endorsed the party favorite, but only after landing more punches than pathetic ex-Conservative Senator Patrick Brazeau did against Trudeau in his celebrated boxing match.

"He has told Canadians that we need a 'bold plan' and a 'clear vision' without defining either," Garneau said in February. "On Justin's two clear priorities -- the middle class and youth engagement -- he has said nothing. We have to know what we're voting for, not just who we're voting for."

"We made the mistake last time of saying, 'All we have to do is choose a leader and everything will work out,''' Garneau said, with a reference to disastrous former leader Michael Ignatieff.

"We did not define ourselves, the Conservatives ended up defining us. They'll do it again this time unless we know where each of the candidates stands."

"I am doing the Liberal party a big favour by bringing this up. It's a difficult question but it's one that needs to be asked," Garneau concluded.

"Joyce, have you abandoned the Liberal party? Have you lost faith in our party?" Garneau asked her. Murray responded that her plan was "about one-time co-operation... to defeat Stephen Harper."

Lastly, one of my Facebook friends says the NDP and Conservatives seem to be getting nervous about Trudeau -- and I agree, but only on the part of the NDP.

Trudeau's celebrity leader status may eliminate any chance of the NDP seriously challenging Harper's rule in 2015 but there is almost no chance of a third to first miracle comeback win by the Liberals.

So the Conservatives aren't nervous about Trudeau as Liberal leader. They are elated.