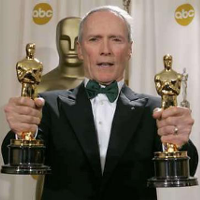 While the Academy Awards are a big deal we just enjoyed, so too are the lesser-known Oscars for performances in B.C. politics.

Just like in the movies, these awards also feature oversized egos, over-budget epics and overblown performances.

So without further ado, the nominees for best picture in B.C. politics are:

Les Miserables: A desperate BC Liberal Finance Minister Mike de Jong is so terribly poor he is reduced to stealing left-wing budget ideas from the New Democrats, like increasing taxes on corporations and the wealthy!

When caught, de Jong breaks into song, bringing tears to the audience's eyes with these lyrics from "Who Am I?"

"Who am I?/Can I conceal myself for evermore?/Pretend I'm not the man I was before?"

When a provincial election throws them all together in one small lifeboat trying to survive, can Dix tame the NDP tigers, or will he take one practical step too far and go overboard?

Beasts of the Northern Wild: John Cummins stars in this touching movie about a man who grows up in a forgotten, cut-off, backwards bayou called the BC Conservative Party.

Cummins leaves his isolated compound to become their leader and harnesses them as BC Conservative candidates, with policies that scare metrosexuals but just may appeal to northern voters.

But her quest goes sideways when an Angus Reid Public Opinion poll released just weeks before the provincial election says Clark is polling around 30 per cent and her chances of returning as premier are barely above zero.

Argo: John van Dongen and Bob Simpson star as veteran MLAs who find themselves suddenly isolated and in grave danger after leaving their respective BC Liberal and New Democratic parties during a violent uprising against the established regimes.

Watch as former opponents van Dongen and Simpson plot an unlikely plan to escape from certain political death on their own by posing as independent candidates working together in the approaching provincial election. Are they going to survive?

Whichever B.C. politics movie you think is the best, remember that when it ends, you are still left sitting in the dark.