When historians write the chapter on the current period of social democracy in Canada they might well conclude that the worst thing that happened to it was the 2011 election when the NDP got 103 seats it hadn't really earned. It was such an unexpected event that the NDP could not cope with it. You could see it in the euphoria of election night -- the same night that the dismantling of the country (whose best government features the party could take much credit for) would begin in earnest with a Harper majority. 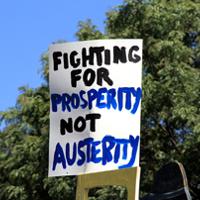 Time for an Adult Conversation: Taxes

The delusion set in that night and it continues to today. While the party always talked as if it would become government it was always an article of faith, not reason. The election put that article of faith on steroids and the reward for the faithful was to be allowed to believe even more strongly. That blind faith will destroy social democracy in Canada and hand Stephen Harper the additional four years he needs to dismantle the country. After transforming the country in the post-war years into a modest social democracy without ever coming to power, the NDP's false dream of actually coming to power threatens to wipe out its legacy. If that isn't irony I don't know what would qualify.

The only hope of delivering a fatal blow to the Harper Conservatives is a one-time agreement between the opposition parties focused on a single policy agreement: a coalition to defeat Harper in the House and establish proportional representation.

Neither the Liberals nor the NDP seem at this point to be the least bit interested. The Liberals suffer from their own delusions: returning to their "natural governing party" status of the past.

But those who vote for the NDP have always assumed that this was a party that actually put the country's interests ahead of its own. Regrettably, everything we have seen from the party under its last two leaders belies this assumption. It was Jack Layton's NDP whose preoccupation with political advantage handed power to Harper in the first place and facilitated his majority.

Three factors make it a virtual certainty that the NDP cannot win a majority or indeed anything close to it.

First, the Harper Conservatives will outspend the opposition by nearly two to one and much of that will be attack ads demonizing the opposition leaders long before the election is even close.

Second, the 30 new House of Commons seats are almost all in suburban Canada (mostly Alberta and Ontario) where the Cons do extremely well -- and the NDP doesn't.

Third, the Liberals will eat into NDP support no matter who they choose as leader. This is especially true as the NDP moves further and further to the centre, legitimizing the Liberals' policies. And as the NDP moves right more of its traditional supporters will stay home -- as tens of thousands already do.

It is clear from the polls that continued efforts to demonize Harper are not going to bear much fruit. The fact is that the media -- which was so easy on Preston Manning and on Harper in his early days -- has actually been pretty good at exposing the outrages of the Harper government. It has almost no impact on his ability to hold on to his core support. His long list of violations of the letter and spirit of democracy, his attacks on science, his grotesque foreign policy, his attacks on unions -- all of it simply reinforces the anger of the 60 per cent who have opposed him all along.

Go figure. Or rather, the NDP and Liberals should go figure.

The Nanos poll suggests that the Conservatives have almost no room for growth except in Quebec, where they are actually losing support, not gaining it. In contrast the Liberals and the NDP have plenty of room for growth in virtually all parts of the country with over 50 per cent east of Manitoba saying they would consider voting for either party.

Who will fare better at capturing their potential supporters? The NDP's strategy does not seem to be focused on this goal. Its recent flip-flop on corporate rights agreements (so-called free trade), its refusal to address the issue of tax cuts and the $50 billion hole in annual revenue, its fear of challenging Harper on law-and-order issues all suggest they are trying to replace the Liberals.

Instead of trusting its own supporters and potential supporters by providing a vision of the country that other polling suggests a majority support, the New Democrat party seems engaged in micro-managing its policies and messages. If Tom Mulcair thinks this is the way to capture a greater percentage of those who would consider voting NDP he is in for a rude awakening.

The Liberals and the NDP don't have to grow their support much to deny Harper a majority but neither of the parties will be strong enough to grab minority status for themselves. It is a truly sickening prospect to imagine, once again, these two self-interested parties allowing a Harper minority to continue its destruction of the country because they haven't got the integrity or the guts to put the country first.

But as it stands today that seems, incredibly, to be where we are headed.

Pour on the pressure

Mulcair's recent edict that only he will talk about potential co-operation has been seen as just another way of saying it's dead. It calls for concerted action for the rest of this year to do everything possible to convince these parties to join with the Greens to save democracy and the country.

A friend recently suggested that what is needed is a Voters' Union to press for co-operation. It's a great idea.

The Green Party has been calling for this for sometime. The only Liberal leadership candidate who has openly campaigned on co-operation with the other opposition parties is Joyce Murray. Like others, including Fair Vote Canada and other civil society groups -- and even right-wing political pundit Andrew Coyne -- Murray calls for uniting progressive voters behind a single candidate in enough ridings to ensure the Conservatives' defeat.

The Liberal leadership contest allows for non-members of the party to vote through the creation of a "supporter" category: anyone willing "to affirm support for Liberal principles." If thousands of Canadians signed up as supporters of Murray she could actually win. By the way, Murray is also to the left of virtually all the other candidates who fall over themselves being pro-business.

As for the NDP, every progressive in Canada should be collaring their NDP friends (and emailing MPs) and giving them a wake-up call: ask them if they care more about their precious party than they do about their country. If their answer is unclear tell them the party will not get another cent from you until they get on side with a co-operation strategy. The next fundraising letter you get should remain unopened until this happens. This is the year to do it. By December we need to know that the Conservatives will be headed for the dust bin in 2015.