Seven years can take you from high school to a Ph.D. But as Stephen Harper and his cabinet approach their seventh anniversary as Canada's governing party, the Conservatives look, if anything, more amateurish than ever. 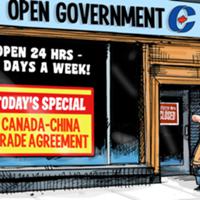 Consider just a few recent fiascos. The F-35 program has "reset" with a new price tag of $45 billion. The sale of Nexen to China's CNOOC is taking widespread criticism, and good luck on the Northern Gateway pipeline. The robocalls affair refuses to die. These don't look like the achievements of a visionary government rich in talent and brains.

Yet Stephen Harper enjoys a reputation as a brilliant political mastermind, methodically turning Canada into Harperland while the rest of us watch in amazement. Our only consolation is that he must rule with a higher, colder intelligence than ours.

What if it's not so? Could the recurring Tory fiascos reflect a very ordinary kind of brain? It's an unwelcome thought: If true, we must be even dumber than he is.

We're not dumb. But we've been naive enough to think the Conservatives are playing by the rules when they're clearly breaking them.

One way to judge the quality of the Harper government is to look at the education levels of his cabinet. This is not to say that post-secondary degrees mean intelligence and talent, but they do indicate some years spent reading, debating, and learning how to think critically. And the world is full of political leaders who have been very well schooled indeed.

Closer to home, President Barack Obama is a graduate of two Ivy League schools, Columbia and Harvard; the man he defeated, Mitt Romney, has a combined Doctor of Laws and MBA from Harvard.

Whatever you think of such leaders' policies, they are all clearly very smart and very well educated. By comparison, Harper and his cabinet don't look capable of punching above their weight -- and yet they do.

Harper's own academic education ended with his 1991 master's thesis at the University of Calgary. It's a routine attack on Keynesian economics as "intellectual support for the unleashing of chronic deficit tendencies inherent in representative institutions." Despite his own government's spectacular deficit (currently $26 billion), Harper has yet to say, as Nixon did, "We are all Keynesians now."

When we look at his cabinet ministers and ministers of state, and review their backgrounds through Wikipedia and their own websites, it's striking to see how poorly, and narrowly, educated they've been.

Out of Harper's 37 cabinet ministers and ministers of state, 11 have law degrees and three have MBAs. Another three majored in political science. Seven have science or engineering degrees. Only one, Alice Wong (minister of state for seniors) has a Ph.D.

Five of Harper's cabinet are post-secondary dropouts or non-completers. Jason Kenney (immigration) dropped out of the University of San Francisco, and James Moore (heritage and languages) did a couple of years at Douglas College here in Vancouver. Keith Ashfield (fisheries and oceans) had two years of business courses at the University of New Brunswick.

Peter Penashue (intergovernmental affairs) studied at Memorial University of Newfoundland but seems not to have completed. And Gary Goodyear (science and technology) dropped out of Waterloo before completing his schooling at Canadian Memorial Chiropractic College.

At least they have high school

Those ministers had at least some on-campus schooling. Eleven out of Harper's 37 ministers appear to have no post-secondary education at all, or none they want to tell the world about. Yet they are now in charge of critical portfolios. These include:

Marjory Lebreton (leader of the government in the Senate)

It's also notable to see how few educated cabinet ministers did any of their studies outside Canada. Bal Gosal (minister of state for sport) has a B.Sc. from a university in the Punjab. Jim Flaherty did his B.A. at Princeton, then came home for a law degree from Osgoode Hall. And Joe Oliver did his MBA at Harvard. Add Jason Kenney's brief experience in San Francisco, and that's about it.

This is not to dismiss the quality of education in Canadian universities (and chiropractic colleges). A few, like Peter Van Loan (MA's in international relations and geography, plus a law degree) and Lisa Raitt (M.S. in chemistry, law degree), have respectable academic credentials.

But it means Harper's ministers bring relatively limited and homogeneous academic backgrounds to the table. However much they may have travelled abroad, they have not studied the world (or Canada) through foreigners' eyes. Inevitably, their world view must be parochial. No wonder Harper took so long to stop pouting about China's human rights record -- no one in his cabinet knew enough about China to offer a counter-argument.

Given their backgrounds, Harper's ministers deserve respect for having got where they are today. It took them years of patient, ambitious slogging to win nominations, win elections, and then win (and keep) a position in cabinet. Their success was a testament to their force of character, their ability to overcome obstacles, and their sheer, rugged individualism. During those years they were outsiders, looking in at the system created by better educated, more sophisticated politicians -- a system that must have seemed designed for the insiders' benefit, not the outsiders'.

But those without degrees from high-prestige schools tend to feel inferior to those who do have them. They tend to resent those snobbish eggheads and their egghead values, which tend to be left-wing anyway. Certainly they despise those values.

So it would make sense that when they won power, Harper and his ministers would ignore or bend the insiders' rules. They heaped abuse on educated public servants with dissenting policy views. They ditched the long-form census as a source of educated pro-insider data. They silenced educated scientists who made inconvenient findings. They cut programs that benefit the clients of those educated insiders. And they tried to kill educated debate before it started with terms like "child pornographers" and "environmental radicals."

Harper's lightly educated ministers might not have much talent at thinking and speaking on their feet, but they could commit their Harper-government talking points to memory, and stick to them, while journalists (also clearly educated and therefore hostile insiders) battered at them in vain. They had to -- without Harper, where would they be today?

And that wasn't all: As outsiders, Harper and his ministers could make a strong populist appeal to millions of other Canadians who felt excluded because they hadn't done well in school but had done pretty well afterward. (Or would have done well if the educated insiders hadn't imposed a lot of dumb laws and regulations on them.) They drove that intellectual snob Michael Ignatieff out of politics, and left Rhodes Scholar Bob Rae to orate to an unhearing House.