"Oh! The good old hockey game / Is the best game you can name." -- Stompin' Tom Connors - "The Hockey Song" 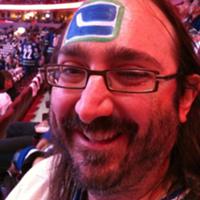 A group of dedicated National Hockey League fans won't cry in their beer if team owners lock out their players. They are planning to take billionaire owners into the boards very hard.

How? By launching a consumer boycott of NHL team owners' other businesses -- including breweries and restaurant chains -- to penalize them for high sticking fans.

The You Have Two Weeks campaign -- named because it was launched two weeks before the planned lockout -- has detailed NHL owners' other holdings as targets.

And while the fans behind the campaign say they aren't out to change the world, they are concerned about who will really get hurt by a lockout.

"I'm not trying to make this a noble cause -- we just want to watch hockey," T.J. Tully said in a Sunday interview from Edmonton, where he is a big Oilers fan.

But Tully points out that in addition to fans missing their good old hockey game, the real victims will be the thousands of modest income workers who have jobs at NHL arenas across North America.

"It's the millionaires fighting the billionaires but they're hurting the $10,000aires who work at the arenas selling food and beer and cleaning up," Tully says.

"The owners aren't worried about them. It's just one more corporate decision for hundreds of millions of dollars, but they don't see the real-life consequences," he said.

Tully says that the hockey season could start on time and negotiations continue simultaneously if it weren't for NHL commissioner Gary Bettman.

"I believe the owners could play under the old CBA [Collective Bargaining Agreement] but Gary Bettman decided to go to a lockout," Tully said.

"Bettman told the owners, 'Fans came running back after the last lockout -- so let's lock the players out, maximize our leverage and the fans will come back again afterwards,'" Tully reasons.

So to balance the pressure, Tully and three friends set up the campaign to make the owners also face some heat -- since players won't have any income if a lockout starts.

But Tully says his group isn't really taking the players' side either.

"We have all this leverage on the owners and none on the players," he said.

Ultimately, Tully says, his campaign could just make the difference between a long, bitter lockout or a return to the rink on time for a full season.

"If we can convince even one owner to change their vote, it's worthwhile," he said.

The low budget campaign -- the website cost $100 and "a case of Stella" to put together -- is taking on some of the richest business people in the world, but that doesn't deter Tully.

And he isn't planning on getting rich off the campaign.

"We have no intention at all to make money on this website," Tully says, noting there aren't even ads on it.

But Tully and his friends think that their one penalty shot at owners just might score the winning goal.