[Editor's note: Last month, Vancouver hosted Velo-city Global 2012, the world's largest cycling planning conference. The event made its North American debut June 26 to 29 at the Sheraton Wall Centre, just a block off the controversial Hornby street bike lanes. Debates over the hottest cycling issues of the day brought some of the world's brightest bike-lovers to Vancouver. They also depressed the hell out of reporter Luke Brocki. First in a series.]

The scene is a massive hotel in Vancouver, but it feels like Europe. The place is crawling with men in pointy shoes and shirts with the top few buttons undone. Women wear scarves, skinny belts and summer dresses you won't find at the local outlet store. They all speak a language reminiscent of English, yet coloured with odd bits of German, French, Spanish and Flemish dialects of Dutch. This bike love-in is a delightful and cosmopolitan affair. It's an upbeat, friendly beginning. 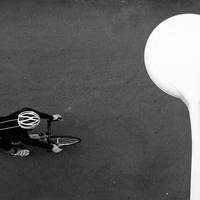 The trouble starts in an upstairs media room, where, morning plenary complete, I sit around a table with some of the world's brightest minds in cycling policy and realize I'm the only reporter present. Where the hell is everybody? This is a smorgasbord of cycling knowledge and I'm the only one feasting.

To my left sits the grinning, bearded and silver-haired German entrepreneur Manfred Neun, trained in psychology and economics. Since 2005 he's been president of the European Cyclists' Federation and a major player in the world of cycling advocacy. To my right is the stoic and peeved German political scientist Hans Michael Kloth, former political editor at Der Spiegel and now acting secretary-general of the International Transport Forum at the Paris-based Organisation for Economic Co-operation and Development.

Kloth is resentful he didn't get to speak at the morning's keynote address, thanks largely to a long and entertaining opening talk by another man at the table, Colombian-born Gil Penalosa. He's the executive director of Canadian non-profit 8-80 Cities, and his passionate talk about how the humble bicycle could cure many of the world's problems had hundreds of delegates laughing, cheering and jumping out of their seats in loud applause. He would also dominate this little press conference of ours.

"Gentlemen, welcome to the greatest cycling city in the Americas!" I proudly proclaim, thankful for how far Vancouver has come in recognizing cycling as a viable transportation option. They all laugh and it feels strangely patronizing.

"So let's talk helmets," I push. "I've been reporting on them for months and the idea of revisiting B.C.'s mandatory helmet law is finally getting some traction. Surely it's the most important issue of the day."

I get a bunch of blank stares. No one seems particularly interested in our city's bitter helmet debate. They're keen to speak about cycling infrastructure instead.

Turns out they don't care much about public bike sharing schemes either, saying they're just gravy compared to the meat and potatoes of bike lanes and traffic calming.

"It's about infrastructure," someone starts again, but I cut them off and steer back toward helmets. Realizing they're stuck with me for another 40 minutes -- with no other reporters present to ask different questions -- they finally decide to humour my myopia:

"We as the cyclists' federation must intervene and say no," says Neun in a thick German accent, his face creased with concern. "This cannot be, that the vulnerable and weaker road users are then also becoming criminalized because they're not using a helmet. That doesn't work. We cannot accept that."

I also learn we are one of just a handful of jurisdictions in the world with mandatory helmet laws for adults (the others being Australia, New Zealand and parts of the Maritimes), before my interviewees start ranting about how the helmet war threatens to exhaust local cycling advocates who should be fighting for cycling infrastructure instead. After all, they argue, all helmets can ever hope to do, assuming they work like they're supposed to work, is prevent the consequences of certain crashes. They do nothing to prevent the crashes themselves.

"We come from a car culture, so we think about protecting cyclists in a car environment," pipes up Kloth, breaking the silence he's kept since getting passed over in the morning plenary. "What we really need to get to is a safe systems approach. Thinking not (about) wearing protectors and that kind of stuff, but thinking separated bike lanes."

"Wait just a minute, guys," I mutter. We've already got 12 kilometres of separated bike lanes here in Vancouver. Did you not ride in on the Hornby Street lane? I sure did! We're already at five per cent cycle mode share in Vancouver (five per cent of all trips already done by bicycle). And Mayor Gregor Robertson wants to get to seven per cent by 2020. Isn't that something?

"You have a mayor that was just re-elected. He's a cycling mayor. Now he has an overwhelming majority on council, so there's no excuse. If he doesn't do it, who's gonna do it?"

"Two per cent in eight years in a city like Vancouver? It's ridiculous. It's nothing!" he says. "When he's talking about sustainability, he's benchmarking himself with the best cities in the world. But when he's talking about cycling, then he's benchmarking himself with Dallas, Mississauga and Atlanta. Vancouver doesn't have to do anything to be better than Atlanta. We need Vancouver to benchmark itself in cycling with the Copenhagens and the Berlins and the Amsterdams and the New Yorks and the Portlands of the world!"

Energized by their aggressive ringleader, the rest of the bike evangelists join the attack against Vancouver's best efforts to keep cyclists happy: the bike commuter paradise of Copenhagen, already at 37 per cent cycle mode share, is looking for 50 per cent of all commuter trips to be done by bicycle by 2015. Chicago is building 160 km of protected bikeways in a single four-year mayoral term, bitter winters be damned. The mayor of Paris spent two years building bikeways all over that city before unveiling Velib, the old continent's largest public bike share system. He even eliminated 7,000 parking spots to make room for the new bikes. In South Korea, the mayor of Changwon is looking to double that city's cycle mode share to 20 per cent by 2020.

When someone mentions Seville, the room falls into silent appreciation: Seville, a medium-sized Spanish city of some 700,000 people has recently become the poster child of political will in the cycling planning world after its administration built 140 km of protected bike lanes, even though the city's cycle mode share was an insignificant 0.2 per cent.

"They went from 0.2 to seven, now at nine per cent and the goal is to go to 15 per cent by 2015," says Penalosa. "What does Seville have that Vancouver doesn't? The key issue was to build infrastructure."

But even in the absence of demand? I venture. Most of the cyclists in Vancouver are potential cyclists. According to Translink's own numbers, 40 per cent of people responding to the company's market research surveys say they're interested in cycling, but also concerned. Economists call that latent demand. And politicians would rather forget all about it. Catering to would-be cyclists seems like political suicide.

"It's almost political suicide," smirks Penalosa. "But politicians have to decide if they're doing whatever they think is right, or just whatever they need to do to get re-elected."

My Vancouver patriotism is bruised and my spirits are down. Desperate, I go for a low blow: "But why is increasing cycle mode share even a good thing?"

Nobody laughs this time. Instead they grumble about health, transportation, recreation, economic development, social justice, democracy, sustainability and liveability before filing out of the room in disgust.

We're only hours into this weeklong conference and I'm in way over my head.

TOMORROW: Brocki rides deeper into Velo-city 2012, quarreling with security over bicycle parking and settling in for another big roundtable filled with transportation experts looking to sell him on the broader economic benefits of building cycling infrastructure.