Can we blame Mad Men for this? 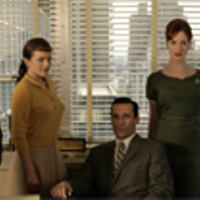 What Can 'Mad Men' Tell Us?

I'm talking about Toshiba.ca's new ad campaign. As if their laptops weren't humiliating enough, the Canadian wing of Toshiba has opted to embarrass itself with a trio of wink, wink, nudge, nudge videos. The ads portray the buxom company spokesperson as a kind of exotic dancer using office equipment in lieu of a pole. According to the copy, Lucy is just the sort of "pro" to unstress (or did she say undress?) tech-buying boys.

She recites double entendres as she stretches in her low-cut yoga top, and the camera gets a shot of her ample cleavage. Another frame has Lucy on all fours, butt to the camera, tilting her pelvis up invitingly in what is ostensibly an ad for a copier. But perhaps the most telling shot is of our amateur yogini on her back, with a Toshiba tablet on her groin, thrusting upwards as if engaged in coitus with the fondle-slab.

Say, did that ad really just tell us that if we buy a Toshiba tablet we're going to get screwed?

This tits-and-apps style of advertising mixes porn-world gestures and crude innuendos with a soupcon of Suzie Wong -- and did I mention the actress playing Lucy is Asian? (Yep, there's something to offend everyone.)

The lap(top) dancer theme is hilarious in a horrifying way. Between spasms of laughter, I wondered what persuaded Toshiba brass to have their company portrayed as the answer to a sniggering, adolescent-boy's wet dream?

I looked up their ad agency, but Toronto's Capital C clearly owes nothing to Don Draper -- although I'm not ruling out The Onion's influence. Tony Chapman bills himself as CEO and Visionary. (I'm not making this up.) Creative Planner Bennett Klein's bio notes that after 25 years in the biz he is "...still excited about combining giant insights and big ideas to create magic..."

Right. So I went directly to Toshiba's PR department to see what inspired this cavorting with a copier.

Apparently, Toshiba commissioned a survey that showed workplace stress due to malfunctioning equipment is common and many office workers like to relax by having office romances(!) Thirty-one per cent of office workers feel flirting reduces stress. Another 14 per cent go for full-blown romances, with tablet users being twice as likely (at 27 per cent) to dip their pens in the company ink. So Toshiba decided to conflate these findings and Lucy was born. Her goal is to "... demonstrate the reliability of Toshiba business technology in a fun and sexy way."

Yes, because it's just so important that office equipment be sexy.

Reading that survey -- do 11 per cent of men really use a broken printer as an excuse to flirt with a colleague? -- all I could think was someone needs to get to these respondents before the sexual harassment suits are filed.

Sherry Lyons, Toshiba's director of marketing communications, says she finds the ads "fun and entertaining." Based on the survey, they determined their target market must be IT departments, which skew male. When they test-marketed the ads internally, Toshiba employees agreed Lucy spoke to male IT workers who are burdened with the problems of crappy laptops and need to "destress."

"I think that in today's world when everything is go-go-go we need to step back and be entertained," Lyons says, explaining why she thinks the ads work.

Any complaints? (Perhaps from male IT workers who are disgruntled at being envisioned as sweaty-palmed creeps entranced by big bazoombas?)

"Not that have been represented to myself," Lyons says, adding that she returned one complaint call from a female about the ads. "But she hasn't reached out to me yet."

So no one thought the spots were sexist in a weirdly retro way? Sort of like a ham-handed version of Mad Men's now notorious Jaguar car campaign? (Draper's sexism, by contrast, is elegant and subtle, casting the pricey car known for mechanical problems as the sort of beautiful, unobtainable mistress all men want. "Jaguar: At last, something beautiful you can truly own.")

"No," says Lyons, adding that a few were confused over the connection between IT, yoga and unstressing. "But I will check into it further now that you have brought it to my attention."

Why bother? If the Twitterverse is any indication, she's right about there being no complaints. And the ads seem to have attracted little attention, judging by the scant 2,200 hits the most popular one had on YouTube.

Maybe all the people likely to be offended were busy cursing CBC's equally retro While the Men Watch? It's a "fun" hockey commentary just for girls and features a pair of women babbling about things like how the athletes need makeovers. I'm sure the Powers That Be at CBC thought this was necessary because, as we all know, there are no female hockey fans in Canada.

Or maybe consumers just couldn't get over how Virgin's boss, that aging hipster Sir Richard Branson, invited B.C. Premier Christy Clark to go naked kitesurfing on his back. Incidentally, doesn't she have the clout to ban him from the province? (I'd be okay with that.)

There's been so much retro sexism lately it's hard to keep up. Or maybe we're like those frogs in the boiling water -- as sexism increases slowly and steadily, we just tolerate it.

"I think she's going to poke someone's eye out with those," says Thomas Yaccato wryly, viewing the buxom Lucy in action. "It's not the worst I've seen, but on the eye-rolling scale, this one is a 10."

The author of The 80% Minority and The Gender Intelligent Retailer thinks Toshiba got its wires crossed if it believes men are their audience, since most research shows women are the dominant market for office equipment. Even when they're not the ones signing the cheques, they're the major influencers -- women control 80 per cent of consumer spending.

And Thomas Yaccato, who does yoga herself, suspects that turning the exercise into a bastardization of pole dancing might well offend the legions devoted to downward dog.

"Yoga is not sexy. No one's boobs are flopping around. It's hard work," she says.

(Here it's only fair to note that there is a kind of genius to an ad that manages to offend so many disparate demographics in just 60 seconds.)

Thomas Yaccato calls this a good example of an advertiser shooting for tongue-in-cheek and missing the mark in a way that risks backlash.

"Humour, irony, even borderline sarcasm, work well in ads aimed at women -- the Old Spice guy is a good example -- but tone is important. Just a degree off and you render it sexist and patronizing."

Thomas Yaccato isn't surprised the ad is being ignored, noting that there is so much demeaning advertising that most women learn to tune it out. But she adds that it's a risky game for advertisers, especially with the advent of social media, which amplifies women's natural tendencies to give and seek personal recommendations for products. Women talk. And as the most sophisticated consumers, they're also the most critical.

That's why she advises clients to test market ads outside of their own corporate culture, since those that are "male-centred" may cause even women employees to adopt views I'm happy to label sexist, but Thomas Yaccato calls tone deaf.

Which brings me around to the question of how billion dollar corporations -- including the CBC and Virgin -- still feel free to objectify, insult, and ridicule women just for being women. These men can't be stupid, they're rich: ergo they must think it's worth losing half their customers for the joy of pushing a misogynist agenda.

"No!" says Thomas Yaccato. "Here's the jaw-dropping thing about ads like this: the people producing them think they're good. You can bet Toshiba thinks this ad is brilliant, edgy, cutting across all kinds of lines. That it will break through the general malaise around office products."

Really? Is she saying this month's tsunami of sexist media and commentary isn't part of a gigantic plot to make '60s style women-hating fashionable again? Could I be wrong in holding Mad Men creator Matt Weiner personally responsible for inspiring retro sexism? Nah, I'm sure he's involved: That show makes misogyny look just so damn seductive by dressing it up in great suits.

"All I can tell you is what I see -- for every five ads there's only one like Toshiba's. The pendulum is swinging in the right direction," Thomas Yaccato says from Manila, where she's currently contracted by the World Bank to work with women entrepreneurs.

"It can feel like two steps forward, one step back because of all the [media] noise, but I think it's a blip," she reassures me.

Well, I'm glad we got that cleared up before I fired off a letter holding Weiner to account for Toshiba's laptop dancer, when it turns out it's the other way around. Corporations like Toshiba, Virgin, and CBC aren't on the cutting edge of the vintage fashion trend, so much as just plain dated.