A leaked provincial cabinet document indicates that the provincial government is contemplating "suspending" the powers of one of its most powerful public servants in order to expedite a controversial logging program that has raised alarm bells in the professional forestry community. 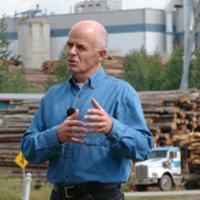 The document leaked late Tuesday afternoon, is the second confidential report in as many days to find its way out of government through back channels -- a sign, perhaps, of the growing unease that some public servants in the Ministry of Forests, Lands and Natural Resource Operations have with some aspects of the "jobs" agenda of Pat Bell, minister of jobs, tourism and innovation.

Bell, MLA for Prince George-Mackenzie, and John Rustad, MLA in the nearby riding of Nechako Lakes, have been actively promoting a plan to ease or eliminate environmental constraints on logging activities so as to artificially extend logging rates in the interior of the province where several rural communities are heavily dependent on logging and milling jobs.

The driving force behind the move is that after 25 years of elevated logging rates in the central interior of the province in response to two outbreaks of mountain pine beetles that killed upwards of one billion mature lodgepole pine trees, the logging and milling industries are running out of trees to cut.

The growing scarcity of trees came sharply into focus in January when an explosion and ensuing fire at the Babine Forest Products sawmill in Burns Lake -- the town's largest employer -- destroyed the mill, killing two workers and displacing 250 more.

In the immediate aftermath of the mill burning down, word rapidly spread that the mill would likely not reopen given the generally depleted nature of forests throughout the region. But Bell and Rustad claim to have found enough trees to provide Hampton Affiliates Ltd. -- the owner of the aforementioned mill -- with enough wood fibre to reinvest in a new facility.

The trouble is that to get at the wood, the government would essentially have to override previous forest planning processes that set limits on what could be logged in order to protect remnant patches of old-growth forest, important wildlife corridors that make it possible for important species like woodland caribou and moose to survive, other forests with high biological diversity values, and forests with high visual values, for example forests within sight of communities or in important scenic corridors.

Such a plan, the leaked cabinet document makes clear, would likely place cabinet in a difficult position with the office of the chief forester, one of the most important posts in the Ministry of Forests, Lands and Natural Operations.

"This action to enable a higher short-term supply would be a deviation from chief forester policy and practice in timber supply management," the cabinet submission dated April 7 reads. "There is some risk that the independent chief forester of the day may not agree with this action, or of a legal challenge if he/she does."

The same document then goes on to recommend that Cabinet consider introducing "extraordinary legislation" to artificially prop-up logging rates in the Lakes Timber Supply Area or TSA, thus providing the necessary "certainty" for Hampton to invest in a new Burns Lake mill.

"Under this option," the leaked memo reads, "government would enact legislation to enable a set of specific actions to add certainty to the supply of timber for a new Babine Forest Products mill over a 15 year period."

Such actions, the memo continues, would "suspend current Forest Act provisions for the chief forester to set the annual allowable cut and the Minister to make license apportionment decisions in the Lakes TSA." The legislation would then "vest these functions with the Lieutenant Governor in Council." In other words the decision would simply be a political decision, driven by the provincial cabinet.

Bruce Fraser, former chair of British Columbia's independent Forest Practices Board, expressed deep concern over the contents of the memo.

"The independent status of the chief forester is designed to ensure effective management of the forests," Fraser said. He said that were such legislation to be introduced it would mean that professional and technical expertise within the ministry was superseded by short-term political considerations. "Once that door is open, you can allocate pretty much anything" to be logged. It becomes "the burn the furniture stage."

A big unanswered question arising from the leaked cabinet document is what the provincial government may yet be contemplating when it comes to the chief forester's powers in three other large timber supply areas where the pine beetle has also been active. Those TSAs include that in Bell's riding -- the Prince George TSA -- as well as the Quesnel and Williams Lake TSAs. Those three TSAs, along with the Lakes TSA, were all each subject to "mid-term timber supply" studies conducted by the chief forester and other ministry staff last year. The studies resulted from a directive issued by Pat Bell, who was then forests minister.

The results of that work were temporarily posted on a government website Tuesday morning and early afternoon before the government summarily removed them following questions about the document raised in the legislature by Independent MLA, Bob Simpson.

That document flagged that there was a serious problem brewing in all four TSAs due to years of elevated logging activities in response to the pine beetle outbreaks.

"Under current lumber market conditions," the document read, "it is uneconomical to harvest dead pine located at long haul distances from the mills. Licencees [logging companies] have indicated that the economic supply of dead pine varies from 1.5 years in Quesnel to about five years in the Prince George TSA."

The document went on to suggest that the depth of job losses and mill closures could be offset, somewhat, by relaxing virtually all constraints on logging forests that had been reserved from logging for environmental reasons.

But job losses would, nonetheless, occur and they would be formidable.

In the Lakes TSA, for example, relaxing the logging rules would mean that instead of local milling and logging jobs falling from 1,572 jobs in the days before the pine beetle outbreak to 434 jobs in the near future, the jobs would decline to 521 jobs instead -- a difference of 87.

In the Prince George TSA, relaxing the logging rules would "maintain" an additional 1,915 jobs. But overall, the decline in milling and logging jobs would still fall dramatically from 13,371 jobs in the pre-beetle-attack years to 8,763 jobs in the near future.

In the Quesnel area, relaxed logging rules were estimated to "maintain" 377 more forest industry jobs. But again, the overall trend was down from 3,321 jobs in the pre-epidemic period to 2,092 jobs in the near future.

And in the Williams Lake area, relaxing the logging rules allegedly maintained 1,144 jobs than would otherwise be the case. But once again, the trend was down from 4,626 pre-epidemic jobs to an estimated 2,955 jobs.

'Things that need to be discussed': Clark

In response to questions in the legislature by opposition leader Adrian Dix about the leaked cabinet memo yesterday, Premier Christy Clark said that the document had not gone before cabinet "in the form" that Dix and others had before them.  "But it does discuss many of the things that are under discussion in the community -- things that need to be discussed, issues that we've talked about with the steelworkers, with the First Nation, with community leaders and with people from across the province," the premier said. "These are discussions that we have to have, and it's a much bigger issue than just in Burns Lake."

Clark also said that the government would be "consulting the public about these issues." Presumably, it is hoped, that will happen before a decision to "suspend" the chief forester's authority is made.