There will be lots of soul searching and head scratching going on this week about what happened with the NDP leadership race. The mechanics of the convention, the interesting lack of deal-making, and how the balloting progressed are all fodder for those who enjoy going through the entrails of leadership conventions. Others will be analyzing the various campaigns of the frontrunners, looking for weaknesses to explain how they could collectively have let Thomas Mulcair, the right-wing Liberal, pro-Israel, political bully become head of their party. 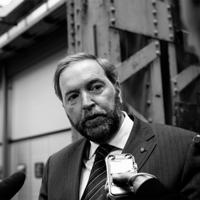 Why I'd Support Thomas Mulcair

Two things shocked me about this race and its final two days. The first is that so many NDPers, part of a tightly-knit, hyper-loyal political culture steeped in progressive values could so casually elect a man who contradicts so many of their principles. Besides the disastrous result for the party and all progressives in the country, the election of Mulcair raises profound questions about the health of the party. There are two possibilities, neither attractive. One is that NDPers, like increasing numbers of Canadians in general, simply don't read as much and that information about Mulcair did not get through to them. To what extent did NDPers devote time and energy to finding out about the candidates? In general, what is the state of member education and engagement in the party?

More worrisome is the possibility that many thousands of NDP members had indeed heard the negative aspects of Mulcair's politics and voted for him anyway. That's a very different problem. It reflects what I have observed about the NDP for decades now: its decreasing emphasis on policy and philosophy and the increased -- political machine driven -- preoccupation with winning seats in elections, often out of context of the political moment and oblivious to unintended consequences. One prominent NDPer I spoke to responded to my shock that he was supporting Mulcair with a sort of football game enthusiasm. "I think he can take on the bastard [Harper]."

Facing a ruthless tough guy? Get your own ruthless tough guy. And possibly create a monster you can't control. It is as if policy, philosophy, and vision for the country have simply been devalued to the point where they are an afterthought or some vaguely interesting historical relic. There seems to have been a kind of "We'll worry about policies later, let's pick someone who can win first."

The second shocker was the low turn-out. Around 50 per cent of the members, who have been inundated with campaign efforts for months now, bothered to vote. What happened? It was incredibly easy to vote and the conventional wisdom about the NDP is that it has the most enthusiastic and committed members of any party. Maybe not.

What will he do?

How will Mulcair's "negatives" play out now that he is leader? These are significant negatives: his vicious, public attack on Libby Davies in 2010 showed unforgivably bad judgment. His failed negotiations with the Harper Conservatives for a cabinet position should by itself be a deal breaker for what it reveals about Mulcair's ethics. When finance critic, he barely said a word about Harper's destructive economic policies, and so one has to suspect he was in basic agreement. He boasted in 2007 about having slashed the work force of the Quebec environment department by 15 per cent, referring to himself as first and foremost a manager. That fits with his history of union-bashing -- and support for NAFTA -- while in Quebec's Liberal cabinet.

It is impossible to predict what Mulcair will do on the whole range of issues that have people extremely worried. It could come down with serial games of chicken. How hard will the caucus fight, for example, on the Palestinian question? Will the caucus be willing to allow a fight to get out into the public? Mulcair has demonstrated that he is more than willing to do so, the consequences be damned. Do you protect the party from bad publicity or do you protect it from having its policies gutted?

Oversold as popular in Quebec

Mulcair's rigid fiscal conservatism may be another problem that comes up very quickly. Mulcair's economic views are closer to Harper's than they are to Jack Layton's or any other recent NDP leader. How convincing will he be in attacking deficit slashing if he actually believes in it?

On the fair taxes front we will get nothing from Mulcair unless, again, the caucus uses all its power and authority to forces the issue. The strongest progressive voices in such a conflict may just find themselves in the shadow cabinet, making it tricky to criticize the party leader -- and your "cabinet" boss.

On the critically important issue of Quebec, NDPers hoping that Mulcair is the man to retain what Jack built may quickly be disappointed. You would be hard-pressed to find a social activist in Quebec who thinks Mulcair is a progressive. He is widely disliked. With the Bloc resurgent, open rejection of Mulcair's leadership by NGOs and movement groups could be disastrous. The scores of Quebec MPs have no social base of their own, and the vast majority have no riding associations.  The party needs to build that base to keep its seats and Mulcair could be a barrier.

It all seems to be starting off well enough and we can hope that now that he has the position he wants, Mulcair will work hard to ensure unity -- which one would assume is in his interest, too. He has kept Libby Davies as deputy leader and has said there will be no house cleaning of the party staff, most of whom opposed his candidacy.

Whatever happens, it will likely happen sooner than later.