The Conservatives have been caught up in many shady activities since coming to power. The revelation that they may have been behind a robocall operation to suppress voting for opposition parties would rank, if proven, among the more serious offences. 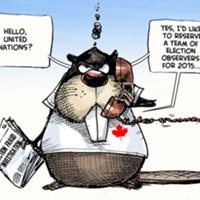 Stephen Harper has denied involvement in the scam in which operatives acted under the guise of Elections Canada officials. Coincidentally, another controversy, the in-and-out affair, involved Elections Canada. Some of Harper's most senior officials took part in that operation.

In giving or not giving the benefit of the doubt on matters like these, the question of the track record figures prominently. To the misfortune of Team Harper, its record on duplicitous activities is hardly one to inspire confidence that its hand are clean.

There follows a list -- is Harperland becoming Nixonland? -- of dirty tricks, black ops and hardball tactics from the Conservatives' years in power.

The duplicity began in the election that brought the Conservatives to power -- the 2006 campaign in which they were promising a new era of transparency and accountability. Via some peculiar accounting practices, the Tories exceeded spending limits in the campaign, providing themselves with an advertising advantage in key ridings. They were later caught, had their offices raided by police and ultimately pled guilty last year to reduced charges of violating financing provisions of the Elections Act.

More than $40-million slated for border-infrastructure improvements instead went into enhancement projects in Tony Clement's riding in preparation for the G-8 summit. To conceal the intent of the spending from legislators, John Baird used the border fund as a "delivery mechanism" for the money.

The document-altering scam involving Bev Oda's office and the aid group Kairos is only one of several instances in which the Tories have been caught document-tampering. They went so far as to alter a report by Auditor General Sheila Fraser to make it look like she was crediting them with prudent financial management when, in fact, it was the Liberals to whom she was referring.

The Conservatives employed a number of authoritarian tactics to avoid culpability on the Afghan detainees' file. They included an attack on the reputation of diplomat Richard Colvin, the shutting down of Parliament and the disabling of Peter Tinsley's Military Police Complaints Commission. The Tories denied Tinsley's commission documents for reasons of national security -- even though commission members had national security clearance.

In an act described by the Speaker of the Commons, himself a Tory, as reprehensible, Conservatives systematically spread rumours in Irwin Cotler's Montreal riding that he was stepping down.

6. The Suppression of Damaging Reports

A report of the Commissioner of Firearms that showed the gun registry in a good light was kept hidden by Public Safety Minister Peter Van Loan beyond its statutory release deadline. As a consequence, the report escaped the eyes of opposition members before a vote on the registry was taken. It is one of many instances in which the government has suppressed research that runs counter to its ideology.

7. Attempt to Frame the Opposition Leader

Late in the 2011 election camapign, a senior Conservative operative leaked bogus photos to Sun Media in an attempt to frame Michael Ignatieff as an Iraqi war planner.

The government went to unprecedented lengths to vet, censor and withhold information. After denying legislators information on costs of programs, Harper became the first prime minister in history to be found in contempt of Parliament. The public service has muzzled like never before. Last week, several groups wrote Harper urging him to stop gagging the science community on the question of climate change and other issues. The Tories denied an opposition member accreditation to attend the Durban summit on climate change, then lambasted the member for not being there. Journalists have faced myriad restrictions. At one point in the in-and-out affair, PMO officials fled down a hotel fire-escape stairwell, Keystone-Kops style, to avoid the media. On another, the governing party had the police clear a Charlottetown hotel lobby of scribes wishing to cover a Tory caucus meeting.

9. Intimidation and Bullying of Adversaries

The list of smear campaigns against opponents is long. Some that come to mind are Harper's trying to link Liberal Navdeep Bains to terrorism; Vic Toews' labelling of distinguished jurist Louise Arbour a "disgrace to Canada" for her views on the Middle East; seeking reprisals against University of Ottawa academic Michael Behiels for being critical of the government; and the dismissal of Nuclear Safety Commission boss Linda Keen who the PM decried as having a Liberal background.

10. The 'Citizenship' Dog and Pony Show

As well as being muzzled, civil servants have been put to use for the government's political benefit. In one such case, the immigration department ordered bureaucrats to act as stand-ins at a fake citizenship reaffirmation ceremony broadcast by Sun TV.

11. Writing the Book on Disrupting Committees

The Tories quietly issued their committee chairpersons a 200-page handbook on how to obstruct the opposition. The handbook recommended barring witnesses who might have embarrassing information. It went so far as to instruct chairpersons to shut down the committees if the going got really tough. The Tories have also issued an order that frees cabinet staffers from ever having to testify before committees. They are resorting more frequently to in-camera committee sessions, away from the public and media eye.

Colonel Pat Stogran, who was dropped as veterans' ombudsman after making waves, says he became the target of anonymous defamatory emails and other dirty tricks after criticizing the government. Other veterans, Sean Bruyea and Dennis Manuge, say their medical files have been leaked, going all the way back to 2002, in an attempt to embarrass them.

The prime minister brought in a fixed date election law which, he said, would remove the governing party's timing advantage in dropping the writ. He promptly turned around and, earning Jack Layton's lasting disdain, ignored his own law and issued a surprise election call in 2008.

In the wake of the Karlheinz Schreiber cash hand-out controversy, Harper's team, in its zest to disassociate itself, went so far as to put out the false rumour that Mulroney, who won two majorities for the party, was no longer a card-carrying member.

The Conservatives have resorted to the use of shady tactics to de-access the Access to Information system. In one notable instance cabinet staffer Sebastien Togneri ordered officials to unrelease documents that were on their way to the media. Freedom of information specialist Stanley Tromp has catalogued some 46 examples of the government's shielding and stonewalling.

Operatives hauled voters out of Harper rallies in last year's campaign for the simple reason that they had marginal ties to other parties. The PM was compelled to apologize.

Operating under phony email IDs, Conservative staffers have attacked journalists in thousands of online posts in an attempt to discredit them and their work.

The Conservatives have set records for the use of personal attack ads. In the 2008 campaign they ran an online ad which depicted a bird defecating on Stephane Dion's head. Protests compelled them to withdraw it.

The economic recovery program was paid for by taxpayer dollars but the Tories tried to make political gains by putting their party logo -- until they were called on it -- on billboard-sized cheques. Surveys by journalists showed the money was distributed disproportionately to Conservative ridings and partisans.

The prime minister has been accused of turning his own party into an echo chamber. When someone tried to exercise her democratic right to challenge Harper loyalist Rob Anders for the nomination in his Calgary riding, Harper's men descended like a black ops commando unit, seized control of the office, seized control of the riding executive and crushed the bid.

21. The Rights and Democracy Takeover

Groups like Rights and Democracy supposedly operate at arm's length from the government. But the Harperites, in what journalists described as boardroom terror, removed or suspended board members and stacked the board with pro-Israeli hardliners. As part of the ethical anarchy, a break-in occurred at headquarters.

Along with the accusation of pre-recorded robocalls sending voters astray in last election, reports of several other Tory vote suppression tactics have surfaced. They include a systematic live-caller operation in which Liberal supporters were peppered with bogus information.

The list does not include such controversies as the Cadman affair in which the Conservatives allegedly tried to bribe independent MP Chuck Cadman for his vote; the whitewashing by Integrity Commissioner Christiane Ouimet of 227 whistleblower complaints against the government; the allegation by eyewitness Elizabeth May that Harper cheated in the 2008 election’s televised debates by bringing in notes; and many others.