[Editor's note: Bill Tieleman's column "The Case Against an NDP, Liberal, Green Coalition" published this morning on The Tyee immediately sparked a storm of tweets and debate. Here is a rebuttal just submitted by a key supporter of NDP leadership candidate Nathan Cullen.] 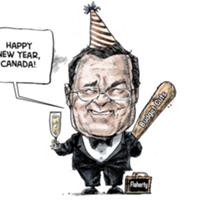 This Year, Put the Country Ahead of the Party

First, a recap of what Mr. Cullen proposes. In Conservative-held seats, ridings should be allowed to hold run-off nominations among the NDP, Liberals and Greens to see which party runs.

Mr. Tieleman raises two main objections. The first is about changing the voting system. This would be a nice problem to consider because it would mean there's a progressive majority government to ponder it.

So let's leave that aside and focus on Mr. Cullen's proposal. Mr. Tieleman demurs because he "couldn't vote for [Vancouver Quadra Liberal] MP Joyce Murray" due to her cutting environmental spending in provincial government. Here's a suggestion: don't. As a Liberal seat, Quadra would not be covered by Mr. Cullen's plan, and other alleged flaws with it deserve a response, too.

Objection one: If done earlier, the NDP wouldn't have broken through

Mr. Tieleman writes that, "NDP voters now know that their party would never have won official Opposition status in 2011 if electoral cooperation efforts had been successful." And? Mr. Cullen did not propose it then. He proposes it now.

The reason is that on May 2, Stephen Harper won a majority.

A second majority was also created on May 2: A federalist one in Quebec for the first time since 1988. All the same, the words "federalist" and "sovereignty" don't appear in Mr. Tieleman's critique. Odd, given the second-biggest province just resoundingly voted to work together more in a progressive federalism.

Why reflect a pre-May 2 reality when the future lies ahead?

Objection two: Strategic voting failed so cooperation will, too

Mr. Cullen is not proposing strategic voting because Mr. Tieleman is right: it does not work. He's proposing cooperation.

Objection three: The differences between the parties are too vast

Every candidate proposes some form of cooperation with Liberals. Brian Topp has many things he'd consider: a coalition; an accord like the one in Ontario in the 1980s; an alliance case-by-case. He helped orchestrate 2008's would-be coalition, when Peggy Nash was party president and Niki Ashton, Paul Dewar and Thomas Mulcair were all MPs who said yes.

If differences are so vast, why does everyone agree the parties can work together?

The issue isn't if Liberals made some horrendous mistakes in government. They did. Rather, it's that given everybody agrees they'd cooperate after an election, why not cooperate beforehand, too?

Objection four: Votes are not transferable

Mr. Tieleman quotes Aristotle: "the whole is greater than the sum of its parts," and says that votes for the NDP, Liberals and Greens are not totally transferable. True.

But the whole that's greater than the sum -- the combined seat count of the NDP, Liberals, Bloc and Greens -- has shrunk in each of the last four elections.

It's ironic that objections to Mr. Cullen's proposal usually note that the unthinkable (the NDP's Quebec breakthrough) actually did happen, and then go on to say the unthinkable (parties cooperating) can never happen.

I disagree. The longer Mr. Harper's majority is in office, the more people there are who bemoan its choices. And at the end of the day, elections are about citizens, not the arcane constitutions -- which can all be changed -- of political parties.