During their youth, both Bill McArthur and Gary Hill were sent to Woodlands, a residential school run by the provincial government for children with physical and cognitive disabilities, or from families experiencing difficult circumstances. 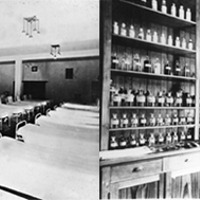 Hospital for the Mind

There, however, they suffered abuse. Mr. Macarthur was sexually molested, and came to close to drowning when he was submerged into ice cold water. Instead of receiving any education, Mr. Hill was forced to perform hard labour. He is now learning how to read.    Woodlands was demolished this past year. Both Mr. Hill and Mr. McArthur were on the grounds to watch the building be torn down.

But the dark chapter on Woodlands is still not closed, because the government has been challenging Mr. MacArthur, Mr. Hill, and other former students' right to seek redress for over 10 years.

In 2001, then ombudsperson Dulcie McCallum delivered to the Liberal government a report confirming institutionalized abuse happened at Woodlands. But the Liberal cabinet, which included the current premier at the time, effectively dismissed McCallum's findings -- and her recommendation that the government not force former students to go to court to receive compensation. In court documents, the government downplayed the ombudsperson report by claiming Woodlands had a "few bad apples."

The Woodland survivors, though, persisted. They united, and many, including Bill McArthur and Mr Hill, showed bravery when speaking about the terror they and others endured to press the case that all former students be eligible for redress. In 2005, Mr. McArthur, Mr. Hill and all Woodland students were awarded the right to pursue compensation.

But to this day, they continue to contend with the Liberal government's attempts to deny relief. The government still refuses to extend compensation to hundreds of Woodland survivors, now on the basis that they were at the institution before Aug. 1, 1974 -- Mr. McArthur left this institution only 10 days before this cut off date.

Embracing technicalities rather than victims

To defend this discrimination, the premier and her attorney general say they are limited by the landmark Crown Proceedings Act, introduced nearly 40 years ago in part to provide citizens a means to take action against government wrong-doing. What the premier and her cabinet neglect to mention is how after all Woodlands survivors won the right to seek class action in 2005, the government chose to spend resources not on helping these individuals, but on establishing a technicality through other court proceedings to restrict relief.

There is a motion in the Legislature right now calling on the government to lift this arbitrary cut off date it helped institute. Not only is it the right thing to do, there is no compelling reason to deny remaining survivors some sense of closure and justice. Prior to the establishment of the cut off loophole, the government extended relief in other cases to all victims regardless of when they were harmed, such as individuals who were at Jericho school during the 1950s.

And furthermore, the funding the government has already set aside could compensate all remaining survivors, because so many former students have passed away while waiting to apply for damages. Among the reasons the Woodland survivors and their advocates have stood together, pressing for "common experience" payment through an out-of-court settlement with the government, is because there is a consensus that students suffered abuse prior to the 1974 are also those with the greatest financial need.

In August, former attorney general and Chilliwack MLA Barry Penner expressed that there was a possibility that the government could finally extend the opportunity to apply for compensation to all remaining students.

We urge the premier to act on the sentiments expressed by her former attorney general by enacting the tabled motion when the Legislature resumes this week. It is within her jurisdiction to do the just thing, by providing closure to remaining Woodland survivors.