Political parties face no tougher challenge than selecting a new leader, especially after the departure of a proven winner. 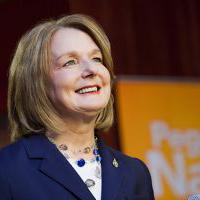 It's the Economy, Dippers

The test is even more difficult for the New Democratic Party because of the tragic death of Jack Layton shortly after he reached the height of success.

The NDP's choice on March 24 will become the new leader of the official opposition, the alternative to Conservative Prime Minister Stephen Harper in the 2015 election.

And that makes party unity a necessity for victory.

While replacing Layton is impossible, the field of candidates to succeed him is very strong.

As Globe and Mail newspaper columnist Jeffrey Simpson flatteringly put it: "Frankly, it's doubtful the Liberals or Conservatives could field a group of eight such intelligent candidates."

In observing the NDP hopefuls, and talking directly to most, I've also been very impressed. Both those perceived as frontrunners by media and those trying to make a breakthrough have much appeal.

But a leadership campaign is about choices, and I've made mine -- I will support Peggy Nash for leader.

My reasons for backing the Member of Parliament for Toronto's Parkdale-High Park riding are both complex and simple.

It's rare to find someone who is extremely tenacious as well as gracious -- two qualities I admire and easily see in Nash.

Nash was the first woman negotiator to lead a union into bargaining with a major auto firm, reaching a deal in 2005 for the Canadian Auto Workers with Ford.

Nash has refused to accept defeat in running for Parliament, losing narrowly in 2004, winning in 2006, facing a setback in 2008 and triumphing again in 2011.

A less tenacious person might have packed it in -- she didn't.

Nash comes unquestionably from a dedicated career in labour, but has the wisdom to understand that Canada is built on a private sector economy whose success helps provide the public sector services that Canadians depend on.

Her knowledge and experience led Layton to appoint Nash finance critic in 2011 -- the most important portfolio in a leader's shadow cabinet.

Nash is also a social justice advocate, passionate about ending inequality and defending human rights everywhere, serving as an international observer for South Africa's historic 1994 election that chose Nelson Mandela as president and in the Ukraine.

She is outspokenly supportive of gay, lesbian, bisexual and transgendered rights, has been honoured by the Sierra Club for environmental leadership and by the YWCA for championing women's rights.

And Nash isn't about top-down leadership.

"Those aren't just words to me. It's my life's work," Nash concluded.

When I endorsed Jack Layton for leader in 2003, I saw a former Toronto city councillor with values, experience and a vision.

I couldn't foresee that Jack would lead the party to opposition status for the first time by dramatically capturing the most seats in Quebec. But I could see the same enormous potential for success in Layton that I see today in Nash.

Fluently bilingual, tough, experienced, knowledgeable, a powerful speaker, a social democrat who understands the economy and someone who will listen and learn as well as lead, Peggy Nash is my choice.

And whether Nash or another candidate wins the NDP leadership, they will have my support in taking on the Harper Conservatives and likely the Liberals led by Bob Rae, as well as my criticism when they make mistakes, as Layton sometimes did.

Some question whether Nash can hold and grow the NDP's newfound support in Quebec -- but not Pierre Ducasse.

The long-time NDP activist, who wowed many when he contested the party leadership against Layton in 2003 and then became his special advisor on Quebec, has endorsed Nash.

"Peggy understands Québec and she's someone who really brings people together," Ducasse says.

In an interesting YouTube interview last November, Ducasse discussed the possibility of regional battles over the leadership dividing the NDP.

"Many political commentators and analysts try to portray this as one region against another, east versus west or Quebec versus rest of Canada," Ducasse says. "I really don't think that's the dynamic of this race."

But in the NDP's one member-one vote leadership contest, endorsements, while important, are secondary to convincing non-members to sign up before the Feb. 18 deadline.

Also critical is persuading as many New Democrats as possible to make you their first, second or even third or fourth choice in the preferential balloting.

And while a few may doubt the willingness of Canadian voters to elect a woman as prime minister, that route to success has already been well travelled around the world.

With women currently serving as national leaders from German Chancellor Angela Merkel to Argentinian President Cristina Fernandez de Kirchner to Brazilian President Dilma Roussef to Icelandic Prime Minister Johanna Sigurdardottir and many more, a party leader's gender should not be an issue.

Nash's biggest advantage may come down to her ability to build an electoral coalition of New Democrats determined to select a progressive leader who can grow the party while still maintaining its core values.

"We absolutely need to vote for someone who is first and foremost and extremely clearly a social democrat," says Ducasse. "That should sound obvious."

Nash is definitely that -- a social democrat who could lead the country.