What will happen to the Keystone XL pipeline from Alberta's tar sands to Houston, Texas? Will it finally be a go after the November presidential election, or will it be tubed? 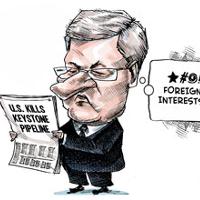 What the Keystone Rejection Really Reveals

Before I go on, Damien Gillis, the master filmmaker and I, are co-founders of The Common Sense Canadian -- an environmentally-based organization -- and do it with virtually no money. We are both several-generation British Columbians but, if there is someone out there who wants to give us some badly needed money, with no strings, obvious or subtle, your nationality is irrelevant.

It was, I hate to admit, with mixed feelings that I heard last Wednesday that President Obama announced he would not approve Keystone XL. Now it appears that it only received, as Bill Tieleman says, a "flesh wound." The global environmentalist in me rejoiced, but the British Columbian in me was disappointed.

It's this way. Alberta's tar sands industry has three ways to transport their bitumen -- through the U.S. via Keystone; to Kitimat, then via tanker abroad; and the Kinder Morgan line into Vancouver's harbour to be loaded there into tankers. If Keystone doesn't pass muster, that will put enormous pressure on Canada's federal government to approve the Enbridge line and increase capacity of the Kinder Morgan line.

The Enbridge proposal is to send oil by two pipelines across the wilderness of the B.C. north, over the Rockies and Coast Range -- and the last remaining large rainforest in the world -- to Kitimat, thence abroad to China and the U.S. by tankers up to 300 per year.

Actually, they are really two lines side-by-side -- one containing bitumen and the other to take back to its source the condensate that was mixed with the bitumen to make it easier to ship.

I want to talk a bit about what this means, but first these three facts.

1. A rupture of the Enbridge is inevitable. We must stop calling these ruptures "risks" -- they are mathematical certainties. The consequences will be calamitous.

2. A tanker catastrophe is also a certainty and the consequences unthinkable.

3. There is no way these "accidents" can be effectively managed.

Incidentally, since 1998 Enbridge and its subsidiaries have had over 800 spills!

On the last point, the Enbridge line will be through 1,100 kilometres of some of the wildest terrain in the world accessible only by helicopter. There is no way they can get a crew and its equipment into the site if there's a spill. And here's the kicker -- even if they could, there is nothing they can do anyway with this stuff. Nothing.

With tankers it's the same -- a certainty that can't be cleaned up, with disastrous consequences.

I emphasize these points because the political process is underway. If the Keystone XL line is not approved, the only outlet for the tar sands is through British Columbia. And the governments, especially the Harper one, will be pushing big time for Enbridge and the expansion of the Kinder Morgan capacity.

Harper will use the carrot and the stick.

For the former, he'll tell us about the billions of dollars we'll get and the thousands of jobs we'll get.

(I'm reminded of the story about the irascible Harry Truman who didn't mince words. His wife was told that her husband should stop saying "crap" whereupon Mrs. Truman replied, "You can have no idea how difficult it was to make him use that word".)

I will, comfortable in the fact that 2012 is a long way from 1948, use the only term adequate to this bit about billions and jobs -- it's plain bullshit.

Where the hell are these billions coming from -- rights of way over the land we'll abandon to destruction? The plain fact is that we get next to nothing and bear the consequences of the rupture or spill to come.

There will be short-term jobs but most of them, the skilled ones, will go to outside crews experienced in building pipelines. In the longer term, there'll be few caretakers after it's completed.

Then there's the little matter of First Nations, 131 of which are opposed to all three B.C. lines, each of which can seek court support which, based upon Supreme Court of Canada decisions, will almost certainly be granted.

I was at the news conference where 131 chiefs signed on to fight this battle, and both Damien and I came away convinced that they would remain so committed. The government and Enbridge assume that this agreement is just a bargaining chip. We'll see. But it only takes one First Nation to successfully sue to tube it all.

We are expected to see our forest and coastline condemned to spills which will wreak havoc on animals and our precious salmon without uttering a murmur of dissent.

Here is the terrible aspect to it all. Canadians and especially British Columbians will be at each others' throats. There will be violence God only knows how serious. This will, of course, be attributed to those who oppose this dreadful policy. But it is the oil sands backers who are asking for it. Blame the victim is the cry!

Neither government cares a damn for us or for our environment. We are, in the minds of the Harper government, hewers of wood and drawers of water, and we should just accept what we're ordered to do.

British Columbians back in 1992 were presented with a constitution, the so-called Charlottetown Accord, and voted it down 70-30. I have no doubt that, given the chance to vote on the pipelines, they will give a similar response.

For there to be, in the words of our constitution, "Peace, order and good government," Harper must provide the last. And best he start soon.