News that hockey enforcer Derek Boogaard's brain showed signs of Chronic Traumatic Encephalopathy (CTE), a degenerative brain condition related to Alzheimer's, has been met mostly with a collective shrug from members of that sport's fraternity. 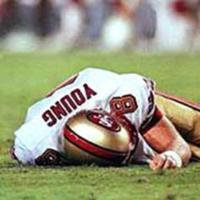 The National Hockey League's commissioner, Gary Bettman, responded by saying it is too early to draw any definite conclusions based on Boogaard's CTE. Even the fighters themselves seem to feel that any long-term damage they may suffer as a result of repeated headshots is a price worth paying for keeping their jobs and realizing their NHL dreams.

Surveys done by the NHL Players' Association show the majority of NHL players want to keep fighting in hockey. As New Jersey Devils tough-guy David Clarkson said: "I wouldn't be in the league if I didn't play that type of style."

Yet the risks are becoming increasingly clear. Boogaard's was the fourth NHLer whose brain was examined by the Boston University Center for the Study of Traumatic Encephalopathy. All four showed signs of CTE. Autopsies on former fighters' brains, including Bob Probert who died in 2010 from a heart attack and old-timer Reggie Fleming, showed severe brain damage.

How then do we reconcile what science is telling us about the link between repeated head trauma and CTE with the fact that, almost to a man, the NHL's fighters say their jobs are worth the risk? Understanding this proclivity to accept serious, perhaps fatal, risks could shed some light on another issue that was debated last month in Durban, South Africa under the auspices of the United Nations climate change summit (COP 17).

Climate science has evolved considerably over the last 20 years to the point that we are now virtually certain that humans, through the emissions of greenhouse gases, are causing climate change. We also know that the impacts of climate change are likely to be very serious if nothing is done to reign in global emissions dramatically. Even the International Energy Agency, hardly an environmental advocacy group, recently warned that the "door is closing" to avert catastrophic climate change.

Yet despite years of repeated, urgent warnings from the scientific community, global emissions are up 49 per cent since 1990 and no new deal emerged out of Durban to replace the expiring Kyoto Protocol. In Canada, our total emissions are now more than 34 per cent above our Kyoto targets.

For the most part, the public and the media recognize and acknowledge the risks of continuing to pour greenhouse gases into the atmosphere, yet we have thus far been unwilling to accept or support any substantive economic measures that might impact us personally. As with fighting in hockey, we know climate change might cause serious problems, even death for some, but as the current system is our meal ticket, it's worth the price.

Clearly, an appeal to leaders to "do the right thing" has not been successful. In both cases, we have individuals such as Gary Bettman and Stephen Harper, who either question the validity of the science or refuse to take commensurate action in the face of mounting evidence.

So what can climate change campaigners learn from hockey? Emphasizing extreme future risks may not be nearly as effective as appealing for solutions that do not appear to pose a personal economic threat. In the case of hockey, this could be a continuing role for tough guys absent injurious blows to the head. For climate change, it may mean building an urgent case for a thriving, clean energy economy with better jobs, healthier communities and less pollution.

Like Derek Boogaard, who reportedly loved what fighting brought him but did not like fighting itself, we don't love fossil fuels. We love what they do for us and we won't be persuaded to give them up easily no matter the risk -- unless of course there is a compelling alternative.