"Let's be naughty and save Santa the trip." -- Singer Gary Allan 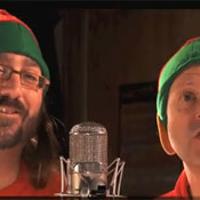 When Christmas carols meet B.C. politics 'tis the season to be a jolly old Grinch.

Here are a few songs you could hear around the Legislature this holiday season.

[To the tune of "Frosty the Snowman"]

Christy the Premier/Was a radio talk show soul,
With a giant smile that stretched a mile/And a very ambitious goal.
Christy the Premier is a fairy tale, they say,
She was made of fluff but she sure could bluff, so she came to power one day.

There must have been some magic/In that photo op they planned.
For when they turned the cameras on/She really did glad hand!

O, Christy the Premier/Said she'd beat the NDP
And the Liberals say/She'd campaign away
To keep power for them in B.C.

Christy the Premier/Knew
the polls were bad that day,
So she said, "A spring election we'll run/It'll be such fun
Now before I melt away."  Down to the Caucus/With an election writ in hand!
Running here and there all/Around the Ledge saying:
"Elect me while you can!"
She led them down the streets of town/
Right to the Cabinet room.   And she had to call it off when/She heard them holler "Stop!"

Away in the U.K./High Commissioner his role,
Premier Gordon Campbell/Rewarded for his toil.
The stars in London, England/ Shone ever so bright,
But Gordon was troubled/All through the night.

"It pains me to think of the reception I'd get,
When Dave Barrett hasn't even got an OBC yet!
Nor Vander Zalm, nor Harcourt -- still longer they wait,
But it's better to get it too early than late!"

But now with Dix he'll make his mark/Ha-ha-ha-ha-ha, ha-ha-ha-ha

Has made the premier very broody/Ha-ha-ha-ha-ha, ha-ha-ha-ha

Best wishes to all readers for a happy and safe holiday season! See you back here on Dec. 27.