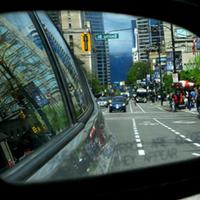 What would Vancouver's top issues be in Saturday's election if we weren't pre-Occupied?

Occupy Vancouver started exactly one month ago today on Oct. 15 with a large rally of more than 4,000.

Since then, Occupy Vancouver has dominated municipal election news, pushing out most reporting on other civic issues.

Now, a new Angus Reid Public Opinion poll says Occupy Vancouver -- which was intended to represent 99 per cent of the population -- has only 29 per cent of Vancouver residents viewing the protest favourably, while 64 per cent view it unfavourably.

And just 15 per cent believe it should be allowed to continue, while three-quarters either want the City to take legal action -- and a city injunction application resumes Wednesday in B.C. Supreme Court -- or set a deadline to clear the Vancouver Art Gallery lawn.

But regardless of what happened with Occupy, what about other key Vancouver issues?

"The Vision Vancouver council will implement a comprehensive moratorium on the expansion of gambling in Vancouver, and we will take a clear stand against the idea of a major casino in our dynamic downtown core," Robertson said.

But Vancouver's right-wing Non-Partisan Association has a split personality on gaming.

NPA mayoralty candidate Suzanne Anton also voted with Vision and the Coalition Of Progressive Electors against the casino, yet says she has always been in favour of a destination casino in Vancouver.

"I said I would have supported expanded gambling, and that I was very worried that this project was going down and the jobs that might be lost," Anton said.

Anton may have to explain her position to NPA candidate Sean Bickerton, co-founder of the Vancouver Not Vegas Coalition, which fought the casino plan.

Bickerton: "I opposed it then, I oppose it now, and I will oppose it in the future."

Bike lanes: Vision got a lot of flak for introducing designated bike lanes on the Burrard Street Bridge, Hornby and Dunsmuir Streets. But the Angus Reid poll shows Vancouver council gets 62 per cent approval for that move.

Maybe that's why bicyclist Anton voted in favour of the Hornby bike lane, then the next morning wanted to rescind her vote and now says the NPA would impose a moratorium on any new bike lanes.

"If you don't like the party, you criticize the process," Price said. "She does not want, I would guess, to criticize the idea of the bike lanes in principle, but also wants to support critics because she's 'in opposition.'"

Anton's NPA platform says Vancouver is "already a world leader when it comes to being a green and environmentally sustainable city. Our NPA team will build on that legacy."

But Anton voted against the greenest city plan, calling it "too ambitious" and railing against the City allowing residents to keep chickens -- something New York and many other major cities do -- and attacking City support for homeowners growing wheat instead of grass on their lawn.

"Politicians and candidates be warned: Ridiculing urban farming is a no-win strategy," Ladner wrote in his Business In Vancouver newspaper column in September after NPA attack ads against Vision's policies began airing on radio. "Food security is marching up the priority list in cities around the world, and Vancouver should be leading, not resisting, this movement."

Transit: The centrepiece of Anton's campaign -- before Occupy Vancouver took over -- is an odd and expensive plan to build a downtown streetcar line connecting Granville Island with Waterfront Station at cost of over $100 million.

The proposal, unveiled in September, says an NPA government would create a project task force in its first 60 days and "prepare a request for expressions of interest to potential private sector partners including the development community, transportation sector and B.C. corporate sector."

A backgrounder released by the NPA talks about costs and potential ridership, but doesn't mention TransLink -- the regional public transit authority -- or who would operate the line.

City engineer Peter Judd told city council in September that: "It's not a project that the City would pursue on its own -- it's a project that has to be pursued integrally with TransLink."

It is interesting to note that the NPA election campaign chair and key fundraiser is Peter Armstrong -- executive chairman, founder and principal of the Armstrong Group, owner and operator of the Rocky Mountaineer rail tour business.

And outgoing NPA Park Board Commissioner Ian Robertson is spokesperson for the Armstrong Group.

Rocky Mountaineer has been using replacement workers to continue its luxury rail travel operations since employees represented by Teamsters Local 31 were locked out in June in a contract dispute.

The Armstrong Group bought bus tour operator Gray Line West from Greyhound Canada in 2005, but shut the Vancouver operation down in 2007, with the NPA's Robertson saying there was competition from other tour bus companies and too many options available for tourists in Vancouver. About 80 workers -- also represented by Teamsters Local 31 -- were put out of work.

COPE also supports increased transit, proposing TransLink create a "C-Pass" or community pass, building on the success of the U-Pass for university and college students.

COPE states that it would work to bring the HandyDart buses for people with disabilities under public ownership through TransLink instead of it continuing to be a privately contracted service.

Anton did agree with Vision and COPE councillors to unanimously endorse that position.

But looking at the issues makes clear that significant policy differences exist between Vision Vancouver and COPE and their NPA opponents.

Similarly wide disagreements also exist in the parties' policies at the Vancouver Board of Education and Park Board.

It's Anton's positions on key city council issues like these that led former NPA campaign manager Bob Ransford to endorse Robertson for mayor, with a stinging denunciation of not only Anton but her "common sense" NPA team.

And Anton's approach had Daniel Fontaine, the former chief of staff to NPA Mayor Sam Sullivan, predicting in late October that she faced a "very slim chance of winning" -- before the Occupy Vancouver issue began to dominate coverage and the NPA's cynical strategy to overcome a weak candidate's flaws.

But Fontaine, co-founder of NPA-friendly blog City Caucus with now NPA council candidate Mike Klassen, did make clear the party's strategy is to attempt to gain majority control of council.

"But what is most at risk for the mayor is controlling that council. The way our council works is if you don't have six seats in council, you're a weak mayor," Fontaine told the Vancouver Sun.

Get out and vote

Looking back to the Angus Reid poll also shows the likely real reason Anton is riding the anti-Occupy Vancouver issue.

When it comes to providing good sanitation services -- which 93 per cent of Vancouver residents say is the most important issue -- 77 per cent think the City is doing a very good or good job.

While that doesn't mean Vision Vancouver and its political partners COPE will clean up on the NPA on Nov. 19, it does show the opposition party definitely won't be sweeping the polls either.

So don't think your vote won't make a difference on Saturday or in advance polls. Regardless of who you support, exercise your democratic right to choice who governs Vancouver.