Canada has joined the ranks of exporting oil nations and now supplies more petroleum to the United States than Mexico or Saudi Arabia. The unconventional character of mined bitumen as well as the startling revenue it generates for government coffers has irrevocably changed the country. Five per cent of the nation's GDP comes from oil while bitumen makes up 25 per cent of the nation's exports. 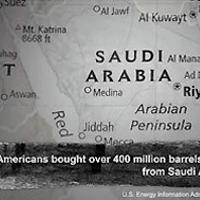 As the wild debate about the Keystone XL pipeline illustrates, Canada's $200-billion energy project has also become a global lightning rod. No oil exporting nation, whether Christian or Muslim, is immune from the corrosive influence of oil money and its dirty politics. Yet Canada has anointed bitumen as the nation's new "economic engine" without setting clear public policy goals or assessing the economic risks. The exploitation of bitumen has also proceeded without a national vision or even an energy strategy.

The environmental risks are now well documented. In fact both the Alberta government and Ottawa have systematically failed to monitor pollution as well as cumulative impacts. In 2011, the Office of the Auditor General declared the obvious: "incomplete environmental baselines and environmental data monitoring systems needed to understand changing environmental conditions in northern Alberta have hindered the ability of Fisheries and Oceans Canada and Environment Canada to consider in a thorough and systematic manner the cumulative environmental effects of oil sands projects in that region."

Although North America's greens have focused on carbon pollution and landscape degradation, the project poses other ethical challenges for the nation. These moral issues include the scale and pace of the project as well as the nature of the Dutch Disease, the absence of a savings plan, severe technology gaps, diminishing energy returns, the Chinese gamble, and the dysfunctional persona of petro states.

Until Canada's elites and its citizens address these critical issues, the project will become an increasing source of global and national conflict. In simple terms too much has been developed too quickly without the proper fiscal, political and environmental safeguards. What should have been a slow-moving blessing has turned into a rapidly developing curse. Moreover, Canada's reputation as a fair and democratic nation has now been blackened. It cannot redeem itself without democratically addressing the following ethical issues:

Since 1996 the global oil industry has invested nearly $200 billion in bitumen mines, upgraders, pipelines and steam plants. Seven of the world's largest companies (ExxonMobil, Shell, BP, Sinopec, Petro China, Total and Chevron) now propose to invest another $180-billion on the resource over the next two decades to boost production from 1.6 million barrels a day to more than 3 million barrels. By 2030 industry will have dug a 40-metre hole in the boreal forest the size of Rhode Island. It has already created lakes of mining waste (170 square kilometres) great enough to flood Washington, D.C. or downtown Vancouver. Moreover, the world's longest and therefore least secure pipelines are all connected to the project. Everything about the project gives a new meaning to the word big.

But the project's Hulk-like scale invites vulnerabilities that should alarm politicians and citizens alike. The development's brittleness can be found in the project's basic economics, engineering complexity and long supply and delivery chains.

As the world's most expensive hydrocarbon ($60 to $80 a barrel) the oil sands are highly vulnerable to oil price shocks. During the 2008 recession companies cancelled or shelved $150-billion worth of investments that became uneconomic at $40 a barrel. Just one improperly installed piece of pipe at an oil sands plant can create a half-billion dollar fire. Just one Enbridge pipeline leak can raise the price of oil by ten dollars and nearly shut down half a dozen U.S. refineries. And the failure of just one large dam of toxic mining waste can pollute a watershed all the way to Beaufort Sea.

A Calgary law firm acknowledged the project's fragility this way: "When it comes to the oil sands, the reality is that small mistakes can lead to big problems."

Fifty years ago, the Austrian economist Leopold Kohr identified bigness as the source of all social misery. In other words, big projects, like big corporations, big cities and big economic unions, invariably fail because they transgress important human scales and the resilience associated with smaller enterprises. Nassim Nicholas Taleb, the astute business critic, has repeatedly warned that big systems are highly vulnerable to improbable events (black swans) and possess little robustness. He has shown mathematically "that a certain class of unforeseen errors and random shocks hurts large organism vastly more than smaller ones." Unless slowed or scaled down, the oil sands could become a Titanic for the Canadian economy.

In 2011 the government of Alberta released a startling infrastructure plan for the world's largest energy project. It forecasts that oil sands production will grow from 1.6 million barrels a day to 6 million by 2035. At the same time the population of the Regional Municipality of Wood Buffalo could more than double and grow to 240,000 people.

Yet this rapid expansion poses more risks than benefits for Canada. For starters, the U.S. demand for oil is in steep decline due to the global recession and rising domestic production from North Dakota's unconventional oil fields. That leaves Communist China as a core market for expanding bitumen supplies. Yet renewable energy reforms combined with slowing growth in its industrial megacities could also lesson demand for imported oil. Moreover oil remains the world's most volatile commodity. The Deutsche Bank has predicted that oil price volatility alone could diminish demand for petroleum as a transportation fuel and cripple high cost projects such as the oil sands as early as 2015.

Given such market uncertainties former Alberta premier Peter Lougheed has persistently advocated for a dramatic slowing down of the project. Until Albertans, true owners of the resource, insist that bitumen be developed in a deliberate and prudent timeframe, overexpansion could expose both the Alberta and Canadian economy to unacceptable risks.

In the 1970s Norway strove to create a "qualitatively better society" by maintaining "a moderate pace in the extraction of petroleum resources." However, industry undermined that public mandate and Norway embarked on a high-speed liquidation program just like Alberta. To date there has been no serious public debate in Canada about the pace of bitumen development.

Every oil exporting country invariably suffers a bad case of the Dutch Disease or the "petrolization" of its economy. Even David Emerson, Canada's former industry minister, now defines the Dutch Disease as a major national concern in which "opportunities from natural resources create destructive pressures on other businesses and industries."

The symptoms have been well defined. They start with a currency that becomes tied to the vagaries of global oil markets. In the 1970s Holland experienced the curse when it discovered natural gas off its shores. Its rising currency greatly eroded the ability of its manufacturing and agricultural sectors to compete and export their goods abroad.

The same hollowing out of the economy has begun in Canada. According to several studies by StatsCan, Desjardins and other groups, approximately half of the 340,000 jobs losses reported in the nation's manufacturing sector are now due to Canada's rising petro dollar. Even a 2007 parliamentary report on the decline of Canada's manufacturing base blamed the nation's new petro dollar and rising energy costs as major contributors.

A damning 2011 report by a Montreal investment group, MRB, concluded that the nation has crossed a critical threshold: "A severe case of Dutch Disease has dramatically reduced the breadth of the Canadian business sector over the past decade, hollowing out manufactured goods exporters and making the nation increasingly reliant on commodity demand. Canada has often been referred to in jest as the 51st state, due to its historical reliance on the U.S. as a key export market. However, it is becoming more accurate to regard Canada as another Province of China."

Without the creation of a national stabilization fund, Canada's petro dollar could fracture the country and tie the nation's economic fate to catastrophic oil price volatility.

According to Bruce March, CEO of Imperial Oil, both federal and provincial governments stand to make more than $500-billion in income from the oil sands over the next 25 years. Yet unlike most oil exporting nations, neither Alberta nor the government of Canada have exercised any fiscal accountability over this sweat-free income. (Ottawa makes more money from the oil sands in form of corporate taxes than Alberta does due to the province's "give-it-away" bitumen royalties.) To date neither jurisdiction has saved this one-time inheritance for future generations.

One 2007 study bluntly warned that Alberta could look like a ghost town by the end of the century if it didn't save $100 billion by 2030.

In contrast to Canada and Alberta, Norway has saved 90 per cent of its oil wealth for future generations. Modeled after Alberta's now debilitated Heritage Fund, the Norwegian Government Pension Fund holds more than $500 billion. The fund has a two-fold purpose. It tames the volatility of oil revenues and saves for the future. The growth of capital in the fund also reflects the physical depletion of finite oil resources.

Unlike Canada or Alberta, the Norwegian government runs responsibly on taxes as opposed to non-renewable oil wealth. Both the OECD and International Monetary Fund have criticized Alberta and Canada for their libertine approach to oil revenue. The current system allows political parties to manipulate oil rent for their own self-serving purposes. Although the bitumen boom provides all Canadian governments with an opportunity to rethink their management of resource revenues and to save responsibly for the future, the nation's baroque political leadership remains asleep at the wheel.

As Canada floods U.S. markets with more bitumen than Americans can burn, both Quebec and Atlantic Canada have become increasingly reliant on foreign oil from the North Sea, Venezuela, Iraq and Algeria. In fact eastern Canada is more dependent on imported oil than the United States (70 per cent). This growing dependence mocks arguments that bitumen is somehow "ethical."

It also highlights the priorities of the North American Free Trade Agreement, which prevents oil from being shipped east. In addition eastern Canada's perilous oil dependence reflects the absence of any national energy plan. While bitumen fuels the western half of the nation, eastern Canada now relies on petro states such as Iraq and Saudi Arabia for its energy security.

Given declining oil reserves from the Middle East, Larry Hughes of Dalhousie University's Energy Working Group has warned that "Eastern Canadians will have to reduce their reliance on oil products; replace insecure supplies of crude oil with ones that are secure; and restrict new demand to non-oil products."

An innovative Canada could turn this challenge into an opportunity. It could even experiment with green renewables in the region in order to lessen its costly dependence on fossil fuels and decrease Canada's unethical carbon footprint at the same time. Yet the issue goes missing in the Canadian media.