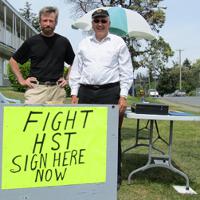 The B.C. government is playing Chicken Little with the Harmonized Sales Tax -- but the sky is not falling, just their credibility.

Where to start when there's so much misinformation?

First, if the HST was "revenue neutral" as the BC Liberals constantly claimed for 22 months, then the $1.6 billion one-time grant from the federal Conservative government would be the only major debt incurred.

Of course, we now know that the HST is not revenue neutral -- that was proven a complete falsehood by its own government-appointed "independent panel" when they discovered that B.C. would gain $820 million more a year in taxes from the HST.

To get up to Premier Christy Clark's claimed financial deficit of $2.8 billion you have to include the lost extra revenue that came from gouging taxpayers with the HST. Oops.

Remember, Prime Minister Stephen Harper didn't give the $1.6 billion because he loves B.C. -- it was a massive bribe that would have paid off in spades with increased federal revenues forevermore.

Federal governments don't just give away money to provinces for free -- there's always a price.

This isn't a Jack and the Beanstalk deal either. The HST is an enormous tax shift taking $2 billion a year paid primarily by big business and putting it onto ordinary taxpayers.

Who would give up $2 billion a year forever to get $1.6 billion once? Other than the BC Liberals and big business, which financed a multi-million dollar ad campaign to try and rescue the HST, that is.

We gave governments a cash cow for a few beans that weren't magic.

And remember the old slogan -- "there's only one taxpayer." The federal money came partly from your own pocket.

Second, while $1.6 billion is a large sum, B.C.'s annual budget is $42 billion this year. That means over a five-year budget cycle, the federal HST grant amounts to under one per cent of total expenditures.

And, as the BC Liberals love to boast, the province's capital spending since they took office in 2001 has gone up by $45 billion -- that's $4.5 billion every single year, on average.

Pecking away at $1.6 billion

Third, the repayment of the $1.6 billion should be offset by 40 per cent to account for the two years the HST will have been in place before its extinguished -- that's $640 million off the tab, please.

Fourth, while the BC Liberals have petulantly put the entire $1.6 billion grant back into the debt column for this year's budget, the reality is that they will try to negotiate flexible, longer-term repayments. And Harper doesn't want to be reminded come next federal election of how he stuck it to B.C. after a democratic referendum rejected the HST.

Fifth, threats to cut public services and freeze government workers wages to punish voters for ditching the HST are among the more laughable attempts at intimidation B.C. has yet seen.

Start with B.C.'s spending on health care -- the second lowest per capita in Canada at $5,355, ahead of only Quebec, below the national average of $5,614 and far behind Alberta's $6,266 and Manitoba's $6,249. Is Falcon's threat to make B.C. the lowest spending province on health care? That would go over big.

It's also not like B.C. was planning on giving wage increases to teachers, doctors, nurses, health care or government workers anyway.

And with B.C. unemployment continuing to rise under the HST -- figures from Statistics Canada show the province lost 12,500 full time jobs in August while gaining just 6,500 part time jobs, for a net 6,000 jobs lost -- it means financial pressure on the government was inevitable.

Kind of hard not to blame the HST but it was supposed to -- according to the Jack Mintz report -- create 113,000 new jobs over 10 years, or then just 24,400 according to the "independent panel" study.

What about those promises, Premier?

Most importantly, Clark and Falcon had desperately promised in the HST referendum to cut the tax to 10 per cent by 2014 -- a move that would have cost the government billions in lost revenue. Where was that money going to come from, growing the magic beans?

In fact, they continue to make outlandishly wrong-headed claims still, including a gross exaggeration of B.C.'s financial picture today.

As the Canadian Centre for Policy Alternatives rightly points out, last week government's scare tactic, estimating the cost to extinguish the HST and return to the GST and PST of $2.3 billion and a loss of $2.8 billion over three years, is ridiculous. The actual cost is $1.5 billion, while B.C.'s own contingency and forecast allowances for budget variations total $2.5 billion during that same time period.

What really went down

The reality of what happened with the HST is simple.

An absolutely panicked then-premier Gordon Campbell signed a deal with the federal devil in 2009 to help offset a deficit of $2.8 billion -- six times larger than the $495 million he swore it was through the entire election.

Campbell and ex-finance minister Colin Hansen went "blood simple" -- the term used by detectives when even in the most meticulously planned murder, the killer makes mistakes and leaves clues when they actually see the victim's blood all over the floor.

Given that Campbell's BC Liberals had destroyed the then-NDP government over a deficit of only $350 million rather than a claimed $87 million surplus before the 1996 election, he knew the consequences of the books being out by $2.3 billion would be politically fatal.

What they couldn't see in their haste was that the HST was a non-starter in B.C. Every government to date that has introduced an HST -- federal and provincial -- has been defeated in the next election when angry voters could seek vengeance. Polls and protests showed how unpopular the HST was, but the government wouldn't admit it.

Campbell and Hansen arrogantly thought British Columbians would grumble and put up with yet another tax shift from corporations to individuals, even after 10 years of increasing the burden on families with moves like higher Medical Services Plan premiums.

They also counted on their broken promise to make B.C.'s unique Recall and Initiatives legislation more effective would render opposition futile. And they laughed at the idea of a former Social Credit premier -- Bill Vander Zalm -- leading the charge against them, not even bothering to register the BC Liberal Party or big business as opponents to the first-ever successful initiative petition.

Now the HST has become history.

So if the sky is truly falling because the HST has been voted out, it can come down on the new B.C. Place Roof -- built at the enormous cost of $563 million -- or the equivalent of 40 per cent of the HST grant.

Of course, all the worried business and BC Liberal worthies who are telling voters they were boneheads for rejecting the HST and that public services are doomed to hellfire and brimstone will still be drinking champagne at the grand opening this month and praising Campbell for building the outrageously expensive umbrella.

In British Columbia the sky isn't falling and we aren't doomed. But the HST is.