So today we get the official report on Vancouver's Stanley Cup riot 2.0. 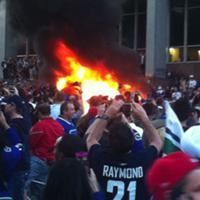 My submission to the commission asked several questions... I'm hoping all of them are answered -- though I confess... not so optimistic. Here's what I wrote...

To the Vancouver Riot Review:

I'm one of the people who believed this couldn't possibly happen again. I wrote a story for The Tyee about why this wasn't going to happen again. The day before the game I went on CBC's As It Happens, praised the Vancouver Police Dept. and said this wasn't going to happen again. And then... several hours before game seven was over... it became clear to me, and everyone I knew who was downtown, that this was going to happen, and I find it utterly baffling that everybody I know who was downtown saw this coming, but whoever was in charge of crowd control downtown apparently didn't.

These are the questions I'm hoping you'll answer.

1. I watched game six at the CBC Fan Zone, and during the second period a police officer politely informed me that my foot was on the green carpet that was part of the special emergency exit row and that if I didn't move it, I would be asked to leave. I moved my foot and was convinced the police were completely on top of things that night.

During game seven, I was told that people were freely drinking mickeys of alcohol inside the Fan Zone.

2. During game six, friends with children were watching the game at the Fan Zone.

During game seven, friends with children were leaving the Fan Zone at the end of the first period because it was clear to them that this was not a safe place to be.

3. During game six, fans were frisked before they were allowed in the Fan Zone.

At the start of game seven, I received a call from my girlfriend saying the Fan Zone had been closed because it was full. Minutes later she called to say that one of the barricades at the library was being removed, no one was being frisked and people were drinking openly.

4. Who decided to take down the barricades and who decided to stop frisking people before allowing them into the family friendly zone?

5. For game six, I had my backpack searched and was patted down by a security guard in order to enter the area near the main post office.

For game seven, it appears someone was able to park a truck in front of the main post office loaded with explosives or at least accelerants.

Bluntly... Why is it that every civilian I know was able to sense trouble brewing that night -- and could sense the dangerous undercurrent from before the start of the game -- but whoever was in charge of security for the night apparently didn't?

8. And considering the fact that the entire province was celebrating in Vancouver -- and the information to date seems to confirm that a lot of the more active troublemakers were from outside city limits -- why wasn't the province or, at the very least, the GVRD picking up part of the tab for policing something that was clearly much bigger than a municipal event?

9. Also... What was the point of closing liquor stores early if people were being permitted to drink from early in the afternoon at nearby bars?

Was anyone checking the neighbourhood bars to make sure they were following the Serving It Right guidelines that day?

10. Is there any consideration being given to charging any of those neighbourhood bars -- and I'm thinking of one sports bar in particular that I heard from several people was serving some of the same fans from noon -- with violating the Serving it Right guidelines? If any of the anecdotal reports I heard from friends and callers to AM 1040 were true, then I'm wondering why one particular sports bar on the edge of the Fan Zone isn't facing major fines and/or a license suspension.

I'm including my report on the riot that night for The Tyee which raises a few other issues.

And this is what my girlfriend wrote about her experiences and how the ugliness started long before the game was over.

If there is anything else you'd like to ask either of us about any of this submission, please feel free to contact us.