"The small Canadian oil companies have been windfalls for us. They won't work with the majors. They don't trust them. And they don't know anything -- they want to export bitumen to Asia!" 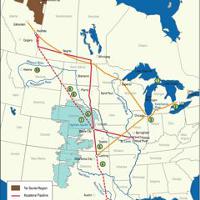 Why Keystone Pipeline Will Weaken the US

The East-West Center is a U.S. government-funded think tank that has been promoting cooperation with Asia for half-a-century. I'm the only Canadian at a Honolulu workshop about future prospects for Asian shipping and energy companies. We're in a coffee break, and dozens of Korean, Chinese and Japanese executives and academics are diligently exchanging business cards.

The voice that attracts my attention belongs to the chairman of a Singapore-based consulting firm that operates at the highest levels of the global oil and gas industry. He's talking about Alberta's tar-like crude oil, so incredibly thick that it has to be mixed with natural gas condensate before it will flow through pipelines.

As I listen in, I hear from the consultant a startling analysis of what Asia really thinks about Alberta tar sands exports, and why the much contested Northern Gateway pipeline from Alberta through to British Columbia's northern coast is being pushed so hard even though Asia doesn't need it.

Key refineries are on the Gulf

The insights begin when I wander over to the consultant, sipping my Java and trying my best to appear nonchalant. I ask: "Why shouldn't the Canadians ship bitumen to Asia? Isn't it a good idea to develop alternative markets?"

"Not in this case," he replies. "The Gulf of Mexico coast is the only place in the world with any significant capacity for handling bitumen. That's because it has refineries equipped to handle heavy oil from Venezuela. If the Asians buy any bitumen from Canada, they'll insist on a very steep discount, because they'll have to ship it to the Gulf of Mexico, too."

He chuckles. "But we don't tell the Canadians this straight-out. We write a report for them."

"Cut and pasted from other reports?" I suggest with a smile.

The consultant pauses, and looks at me hard, then winks.

"But what about the Northern Gateway?" I ask, using the industry name for the proposed 1,200 kilometre-long twin pipelines between Fort McMurray, Alberta, and Kitimat, B.C. "Enbridge is a major player. Surely they would realize that there's no market in Asia?

"Enbridge is a pipeline company, not an oil company," he replies, taking an even closer look at me. "They've promised to find a market, and nothing more. They don't care if it's at a discount."

"So you're saying that Northern Gateway doesn't make economic sense," I studiously repeat.

He nods emphatically. "If the Canadians were smart, they'd build the capacity to refine all their bitumen at source, so as to ship a much more valuable product to Asia and elsewhere. But there are only a handful of upgraders in Alberta -- and their capacity is actually going down."

I press him further. "But surely Northern Gateway isn't just about Canadian oil companies being taken for a ride? I thought that Northern Gateway was designed, at least in part, to put pressure on the U.S. State Department to approve Keystone XL."

Keystone XL is a proposed 3,190 kilometre-long pipeline that would transport bitumen from Fort McMurray direct to the refineries on the Gulf of Mexico coast. The proposal received regulatory approval in Canada last year, but opposition from environmental groups, the U.S. Environmental Protection Agency (EPA) and more than 50 members of Congress have delayed the State Department's consideration of the matter.

"You're absolutely right," the consultant nods. "And not just in part. Gateway is all about putting pressure on the State Department."

"But the people at the State Department aren't stupid," I protest. "Surely they can see right through this?"

"Don't count on it," he laughs derisively. "They're focused on the Middle East. They don't understand the Asian energy market. They really don't."

He leans over and whispers: "And even if they did realize that Gateway is an empty threat, they'd still approve Keystone XL, eventually. No matter what the EPA says, the State Department isn't about to depart from its practice of approving pipelines from Canada. It'll just spin out the decision as long as it can, hoping the project dies for other reasons."

At this point, our South Korean moderator calls everyone back to the conference room. It's time for the executives to get back to work, to find new ways to make money.

As for me, all I'm left with is a story about rubes in cowboy hats -- and a self-assured consultant with remarkably loose lips.